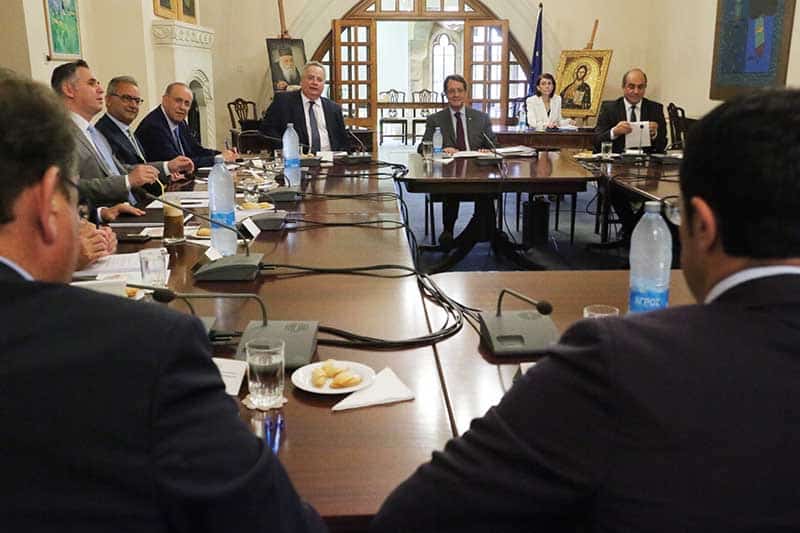 Nicosia is ready to restart reunification talks when the conditions are right to lead to a positive result, the government said on Tuesday following a National Council meeting with the participation of Greece.

Government spokesman Nicos Christodoulides said the Greek Cypriot side was ready to restart the talks when the conditions that would lead to a positive result are created.

“We were not led to a positive result at Crans Montana for a specific reason: Turkey’s stance on the chapter of security and guarantees that had nothing to do with the framework set by the United Nations Secretary-General on the matter.”

Talks between the sides collapsed earlier this month in Switzerland as Turkey refused to give up its right as a guarantor and right to intervene. The Greek Cypriot side insisted on zero guarantees and zero troops.

“Turkey ought to make moves on the Cyprus problem to boost its European course and not the opposite,” the government spokesman said.

Christodoulides thanked the Greek government and Foreign Minister Nicos Kotzias, who attended the meeting, for their support for the president during the talks.

Disy leader Averof Neophytou said despite the failure in Switzerland, Cyprus should hold on to the fact that for the first time the focus of the talks was on security and guarantees.

Neophytou described the session as exceptional, affording parties to be briefed by President Nicos Anastasiades and Kotzias.

“I will repeat what is a piece of our history, Greece was and remains a selfless support pillar in our fight for freedom; the Republic of Cyprus is an independent state, Greece supports our struggle and today’s discussion was exclusively about matters of security and guarantees,” he said.

Diko chairman Nicolas Papadopoulos said his party had proposed the creation of a supreme council of strategic co-operation between Greece and Cyprus that will handle important matters of foreign policy, defence and energy.

“Our approach today was that we must concentrate on the management of the day after since it is now certain that Turkey will escalate tension (and) go ahead with its own approaches in a bid to upgrade the breakaway state and downgrade the Republic of Cyprus,” Papadopoulos said.

Edek leader Marinos Sizopoulos said the party submitted specific proposals to tackle the problems following the collapse of the talks. He reiterated that the current form of settlement being discussed led to a legalised form of partition.

The party tabled proposals mainly aimed at “how we should plan our new tactic and reinforce it to tackle the problems at an EU and UN level,” Sizopoulos said.

Akel leader Andros Kyprianou said the hope for a solution must be kept alive and actions must be planned in the event Turkey attempted to make good on its threats concerning the island’s natural gas exploration.

“Truth be told, whatever we say, it is a fact that the negotiations in Crans Montana not only failed to bring the Cyprus problem closer to a solution but they have distanced it,” Kyprianou said.

He added that if the Greek Cypriots could not understand the concerns of the Turkish Cypriots they would create huge problems for Cyprus.

Akel, he said, remained faithful to a bi-zonal, bi-communal, federal solution with political equality, as defined by the UN.

The party was prepared to discuss ideas and views that would lead to a reunified state with a single sovereignty and citizenship.

John Boyega slammed ‘Game of Thrones’ for its lack of diversity