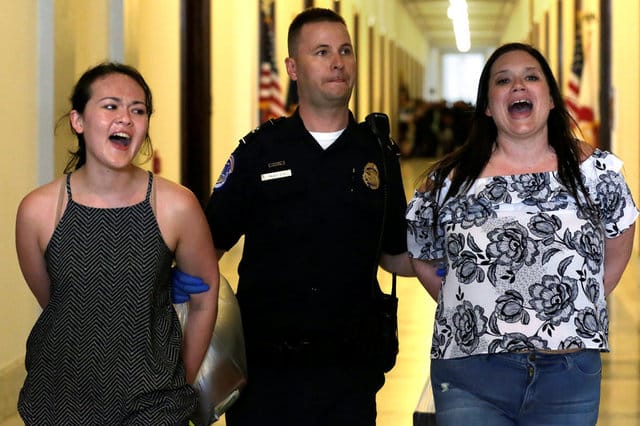 Republicans in the U.S. Congress were in chaos over healthcare legislation after a second attempt to pass a bill in the Senate collapsed late on Monday, with President Donald Trump calling for an outright repeal of Obamacare and others seeking a change in direction toward bipartisanship.

“Regretfully, it is now apparent that the effort to repeal and immediately replace the failure of Obamacare will not be successful,” Senate Majority Leader Mitch McConnell said in a statement.

Two of McConnell’s Senate conservatives announced just hours earlier that they would not support the Republican leader’s latest version of legislation to repeal portions of President Barack Obama’s landmark 2010 healthcare law and replace them with new, less costly healthcare provisions.

With Republican Senators Mike Lee and Jerry Moran joining Senators Susan Collins and Rand Paul in opposition – and amid a solid wall of opposition from Democrats – McConnell no longer had enough votes to pass a Republican healthcare bill in the 100-member Senate.

It was the latest in a series of healthcare setbacks for Republicans, despite their control of both chambers of Congress and the White House.

It also came after seven straight years of promising voters that they would repeal Obamacare if they were to control Congress and the White House, only to find that the public liked Obamacare more than their proposed substitutes, according to public opinion polls.

The non-partisan Congressional Budget Office has determined that the various versions of Republican healthcare legislation would result in anywhere from 18 million to 23 million people losing their health insurance.

However, Republicans argue that Obamacare is a government over-reach and costs too much money.

Monday’s developments had an immediate impact on financial markets as Asian shares stepped back from more than two-year highs on Tuesday and the dollar extended losses.

In the United States, the latest setback delivered a major political blow to Trump, who has failed to win any major legislative initiative in the first six months of his presidency.

In response, Trump said on Twitter Congress should immediately repeal Obamacare and “start from a clean slate” on a new healthcare plan. He said Democrats would join such an effort, even though they have refused to have any part of an Obamacare repeal.

McConnell, apparently backing Trump’s latest approach, announced that he would try to bring legislation to repeal Obamacare to the Senate floor in coming days, but with a two-year delay in implementation to assure a smooth transition.

That idea was rejected by Republicans months ago in favor of simultaneously repealing and replacing Obamacare in order to avoid chaos in insurance markets.

Republican Senator John McCain, who is recovering from surgery in his home state of Arizona, urged a much different change of course – bipartisanship.

“The Congress must now return to regular order, hold hearings, receive input from members of both parties” and pass a bill that “finally provides Americans with access to quality and affordable health care,” McCain said in a statement.

It was not yet clear whether Republicans would get behind the latest Trump-McConnell plans or McCain’s prescription.

Like McCain, Senate Democratic leader Chuck Schumer held out the possibility of bipartisanship. In a statement, he urged Republicans to “start from scratch and work with Democrats on a bill that lowers premiums, provides long-term stability to the markets and improves our health care system.”

Republicans in Congress had been hoping to settle on a healthcare bill before an upcoming August recess so they could begin work in earnest in September on a wide-ranging rewrite of the U.S. tax code.

House of Representatives Speaker Paul Ryan had no immediate comment on the next steps he would like to see following the collapse of the healthcare bill in the Senate.

One health industry lobbyist said that, in the run-up to the second collapse of the Senate’s healthcare bill this summer, there was growing anger among senators over proposed Medicaid cuts and an amendment by Senator Ted Cruz that would have allowed insurance companies to offer cheaper plans that did not have Obamacare’s guaranteed coverage of services such as maternity care.

A similar version of the Senate bill passed the House in May but passage in the Senate was always expected to be more difficult, given the deep tensions between moderates and conservatives.

Moderates worry about cuts to the Medicaid health insurance program for the poor and disabled, while conservatives want those cuts as well as a more dramatic dismantling of Obamacare’s framework.

The first version of the Senate bill failed to attract enough support, forcing McConnell’s office to revise it in a bid to make it more palatable. That version was released last week.

Senator Bernie Sanders, the former Democratic presidential candidate, celebrated what he termed the “collapse” of the Republican effort.

“This is a great victory for the millions of Americans who stood up and fought back against this dangerous legislation,” Sanders said in a statement.

Cyprus issue to dominate at UN Security Council on Tuesday

National Council reconvenes, in the presence of Greek FM