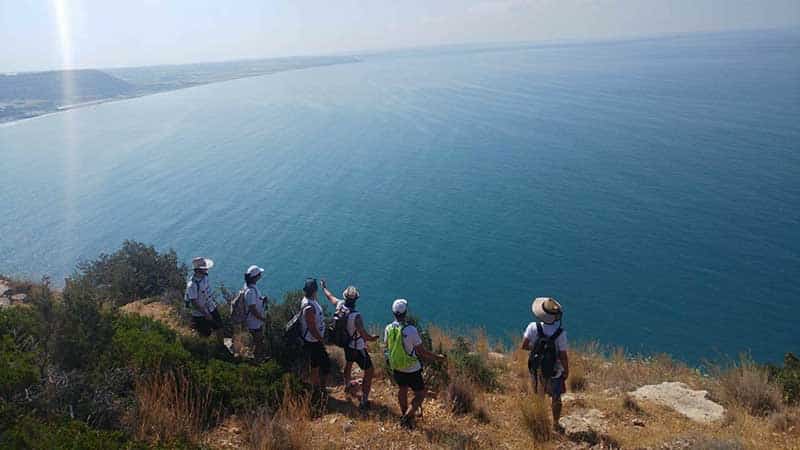 It was called The Big Hike for a reason. Lasting for 27 days and taking in over 600km, this was a journey which traced a route through Limassol, Paphos, Akamas, Kyrenia, Apostolos Andreas, Famagusta, Ayia Napa and Larnaca. A trek which covered, in essence, the whole of the Cyprus coastline. Yes. All of it!
The 10 members of The Coastline Hikers are rightly proud of their achievement, an epic trek along nearly every centimetre of island shoreline, save for military and official areas. Working clockwise from Ladies Mile, the group set off with high hopes on June 10 after a mere four months of planning, and returned, bang on schedule, to the same place 27 days later. But it was no whim that took the band clear around the island; the Big Hike was a journey with, from the outset, a very real, very clear purpose…

“Our aim was to send a message of peace and equality to all the people of Cyprus,” explains George Koumandaris, one of the organisers who, like many of his fellow team members, is a student. “We’re an island surrounded by water; we’re not like the rest of Europe where you can cross the border from country to country. We’re just one little island – too small to be divided. So we set out to unite people across Cyprus, both in terms of those who followed our journey via social media, and those who were hiking as members of the team.”

Aged between 18 and 26, the team comprised four Greek Cypriots, four Turkish Cypriots, one Filipino Cypriot and one Danish Cypriot, most of whom had never met when their journey began. “The idea came on January 20, by February 4 we had four people signed up, and by the end of the month we were hosting an event at the Home for Cooperation in the hopes of making contact with Turkish-speaking Cypriots who might like to join us. We say Turkish-speaking or Greek-speaking,” George adds, earnestly, “because otherwise we feel it stigmatises and divides. We may have different backgrounds, but we’re all Cypriots at the end of the day; the sunrise and sunset you see in Kyrenia are the same sunrise and sunset you see in Larnaca!”

With exams over for the year, the 10-member group set off from Ladies Mile, a point chosen for its distance from the first checkpoint. “We wanted to prove to our followers that we were serious, that we were actually doing this,” George explains. “So we went from Ladies Mile clockwise around the island, first taking in Paphos” – where a flat tyre on the accompanying safety car caused the first of the unforeseen issues, but was quickly dealt with – “and then on into Akamas. This,” he continues, “was probably the most difficult part of the hike. We’d underestimated the terrain: no shade, rocks everywhere, a few bushes. In the end, we didn’t manage to get round the whole coastline of Akamas, and that was sad…”

“But we did,” reveals fellow team member Yiannis Hassapis, “get to stop at Blue Lagoon for a swim! I’d never been there before and, though we were exhausted by the time we arrived, it was just an incredible place to be!” Part of the purpose of the trip, it transpires, was to introduce both team and followers to areas of Cyprus they’d never seen before. And for Demi Papagiorgi, the Karpas Pensinsula was entirely new territory. “I loved Yialousa; there’s a mountain there that we climbed, and I looked down and saw the whole of Karpas spread out before me… mountains, sea and sky. It was so beautiful! Plus,” she laughs, “it was in Karpas that our car broke down again: we managed to find the only mechanic in the whole peninsula to help us out!”

Hospitality plays a large part in the team’s anecdotes. There’s Yusuf – met purely by chance at the Limnitis checkpoint – who fed, watered and put the team up, transporting and supporting them, finding them cheap places to spend the night. Then there was the woman who stopped the group as they were crossing a field in Ayia Marina and insisted they stop and enjoy her melons. In Karpasia, a restaurant owner who’d heard of the endeavour rushed out to offer the team free beer. And at the church of Panayia Kanakaria, the 85-year-old caretaker was moved to tears by their purpose. “His name was Ahmed,” George recalls. “He was Turkish, but spoke excellent Greek, as did many of the people we met in the north of the island. He’d been looking after the church for years, for no money, and told us all about its history. When we told him what we were doing, he cried. He’d had eight children, all of whom died in the war, and he believed so strongly that we should all be united. It was a very emotional moment.”

Camping out where possible, couch surfing where necessary, the group made its way slowly but surely from Soli to Morphou to Kyrenia, along the Karpas and down to Famagusta, crossing once more at Vrysoulles before heading back through Ayia Napa and Larnaca and ending at Ladies Mile. Joined by various supporters on the trip, the core group charted their journey on social media (receiving over 40,000 likes on their Facebook page) with a stream of happy photos and posts. But it wasn’t all sunshine, despite the weather, Yiannis reveals…

“I think one of the biggest challenges was in terms of character,” he muses. “10 people, 10 personalities – that’s a lot of compromise each day! But you come away knowing there’s actually no difference between people anywhere, no matter their background.”
“It was a challenge,” George agrees. “But we’d promised our sponsors, our supporters and our followers that we would do this, so we just kept going. And we faced every problem,” he laughs, “with humour! It’s the universal language!”

At the end of the day, the team all agree on the success of the Big Hike. “We reached so many people, we learnt so much about ourselves and our country. And we proved that every little act can make a difference,” says George. “Next year, maybe we’ll walk the Buffer Zone, or the sea caves. The Big Hike was a mere four months of planning, before 10 people who hardly knew each other set out to prove the power of unity. I think we got our message across. But we’re not going to stop here…”

For more information on The Big Hike, visit coastlinehikers.wixsite.com/cycoastlinehikers or the Facebook page ‘Cyprus Coastline Hikers’

When propaganda works, it then flops at a cost