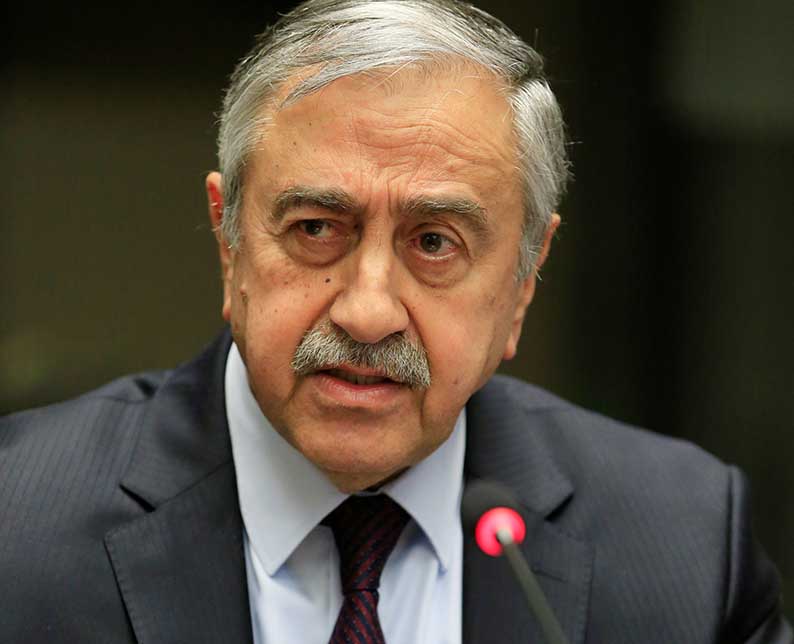 Turkish Cypriot leader Mustafa Akinci said on Wednesday the Greek Cypriot side’s main objective was to become the sole ruler of the island instead of equal partners with the Turkish Cypriots.

In a speech marking the 43th anniversary of the Turkish invasion of the north of the island, Akinci blamed the Greek Cypriot side for the failure of the Conference on Cyprus, held in Switzerland’s Crans Montana between June 28 and July 7.

Akinci, whose speech was broadcasted live by television stations in the north, gave a historic perspective of the Cyprus problem, starting from 1974 but also made references to the intercommunal strife that took place between 1963 and 1974.

The Turkish Cypriot leader highlighted the sensitivities of the Turkish Cypriots with regards to the security issue, which stem from the fighting in the 1960s that eventually forced a lot of them into enclaves.

Turkish Cypriots and Ankara want to retain some form of right to intervene, at least for some time post solution, along with troops on the island. Greek Cypriots want zero troops and zero guarantees.

Akinci said despite the goodwill of the Turkish Cypriot side and Turkey, efforts to reach a deal on the island had failed.

He finished his speech saying his community will continue its path without delaying efforts to clean up their home and diverting from the responsibility of constructing a future in peace.

“We want to live in peace as two communities on this land and geography. The conditions for this can only be established together (with the Greek Cypriots). The time that passed worsened the division. The division will be more concrete. This needs to be seen. We will continue the evaluation process with Turkey in the coming days. We will be calm and realistic.”

Also Wednesday, Turkish Foreign Minister Mevlud Cavusoglu said a roadmap relating to the future actions of the Turkish side on the Cyprus problem will be published when ready.

Cavusoglu visited the north on Tuesday for talks with Turkish Cypriot leader Mustafa Akinci and the political parties.

Speaking from Azerbaijan on Wednesday, he reiterated that the Greek Cypriot side was not ready for a solution within the UN parameters.

“Despite (the Conference on Cyprus) going on for 11 days, and despite our constructive actions, we saw, together with the UN, that the Greek Cypriot side is not ready for a solution inside these parameters and it does not, and will not approach such a solution,” the Turkish foreign minister said.

Based on that, Ankara will consult with the Turkish Cypriots to decide on the next steps, he added.

“When our roadmap becomes clear we will announce it to you and the public opinion,” he said.

It was also announced that UN special adviser Espen Barth Eide will be on the island on Monday for talks with the two leaders.

Eide is scheduled to see President Nicos Anastasiades at 10.30am and Akinci at 2.30pm.