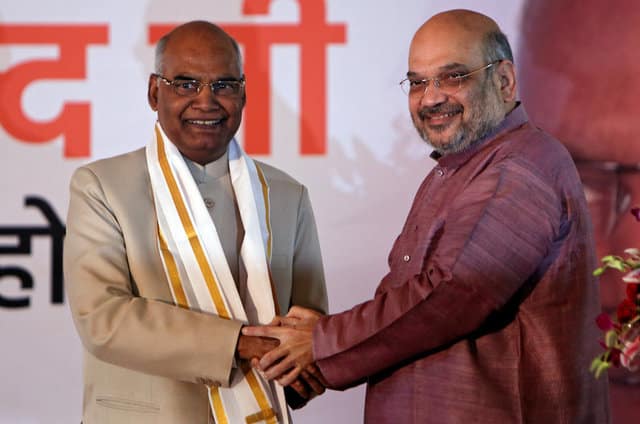 India‘s constitution provides a largely ceremonial role for the president, with the prime minister and his cabinet holding executive power.

But the president has a key role during political crises, such as when a general election is inconclusive, by deciding which party is in the best position to form a government.

Kovind, 71, from the Dalit community – the lowest of India‘s centuries old caste hierarchy – beat the Congress party’s Meira Kumar, also a Dalit by an overwhelming majority.

His election was considered a certainty because of the strength of Prime Minister Narendra Modi’s party in the federal parliament and in the state assemblies whose members take part in a presidential election.

Kovind’s ascent to the highest public office is the first for a leader reared in the powerful Hindu revivalist Rashtriya Swayamsevak Sangh (RSS) or National Volunteers’ Association, the ideological mentor of Hindu groups.

Modi himself was associated early in his career with the RSS, which has long propagated a vision of India that puts the country’s majority Hindus first.

After his victory, Kovind said it was “an emotional moment” for him and it will be his duty to uphold the rule of law. India‘s constitution guarantees equal rights to all citizens regardless of faith.

Kumar, the Congress candidate, said her candidature was aimed against the ideology that Kovind represented and she had asked lawmakers to vote according to their conscience.

“My fight for secularism, the oppressed and the marginalised continues.” Critics of Modi’s ruling Bharatiya Janata Party have long accused it of a deep-seated bias against the country’s Muslims.

Kovind’s victory caps a series of top appointments by Modi, strengthening the grip of the Hindu right on public offices, such as governors, state chief ministers and the heads of universities.

Earlier this week, the BJP named a cabinet minister also with strong Hindu nationalist roots as its vice president candidate for an election to be held in August.

Dalits make up around 200 million of India‘s 1.3 billion population and are being wooed by Modi’s party as it prepares for the 2019 general election.

Shekhar Gupta, a veteran journalist and political commentator said Kovind had maintained a low-profile through his public career, a quality valued by Modi and influential Hindu groups.

“Kovind will not be an irritant for the Modi government that works with sense of total power, they don’t want any distraction to their plans.”