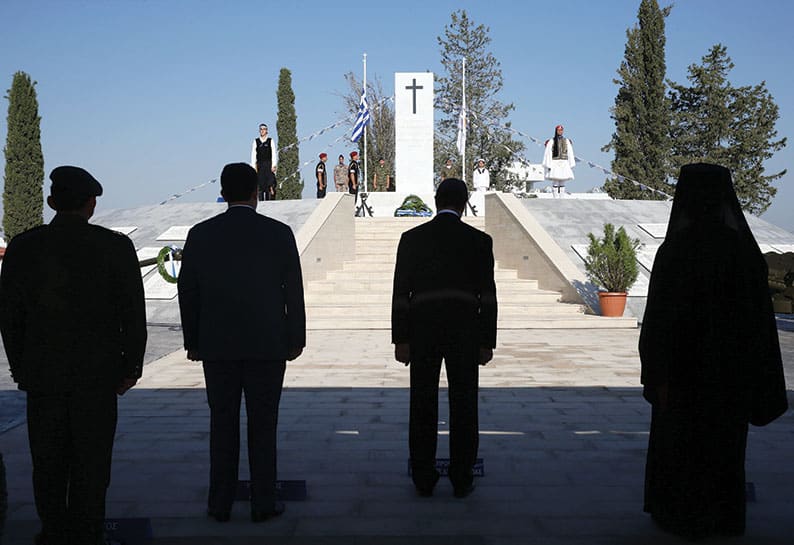 CYPRUS and Turkey traded barbs on Thursday as events were held both in the south and the north commemorating the events of July 20, 1974 that led to the island’s violent partition.

In a written message to mark the anniversary, Turkey’s president Tayyip Erdogan accused the Greek Cypriots side of having displayed an “uncompromising attitude” in the peace talks, in contrast to the “good intentions” of the Turkish-Cypriot side.

“Because of this, the (talks) unfortunately ended without results and no solution has been reached in the negotiation process,” he said.

Erdogan said that Turkey, which has tens of thousands of troops stationed in the breakaway regime, would continue to support the Turkish Cypriots and be a “guarantor” of peace in the region.

For his part, Turkish prime minister Binali Yildirim warned Cyprus that its moves to explore for hydrocarbons around the eastern Mediterranean were “untimely and dangerous”, adding that Ankara would continue to protect the rights and interests of Turkish Cypriots.

“Turkey thinks there is an opportunity for cooperation on energy resources in the eastern Mediterranean but the unilateral steps by the Greek Cypriot side are untimely, dangerous and encourage a deadlock,” Yildirim said.

Turkey, which does not recognise the Republic of Cyprus, questions the latter’s jurisdiction over its economic waters and its actions to ‘unilaterally’ exploit the island’s offshore natural resources.

“Steps to end the unjust, baseless restrictions imposed on the Turkish Cypriot people must be taken without delay,” Yildirim said.

He was speaking at a ceremony in Nicosia to mark the 43rd anniversary of what Turkey calls the ‘Cyprus Peace Operation’ of July 20, 1974, when Turkish troops invaded the north of the island in response to a brief Greek-inspired coup.

Air-raid sirens wailed over the south of Cyprus at dawn, marking the hour Turkish forces landed.

Turkey last week sent two ships and a submarine to monitor the “West Capella” drilling vessel, contracted by France’s Total and Italy Eni, which moved into position in block 11 of Cyprus’ economic waters to start exploring for gas.

Also present was Turkey’s foreign minister Mevlut Cavusoglu – who had taken part in the failed peace talks in Switzerland.

The Republic’s energy plans are proceeding as planned, he added, as are the drilling operations underway in block 11.

In his own message on the occasion of the invasion, president Nicos Anastasiades called July 20 “a black day for Cyprus.”

He called on Greek Cypriots to reflect on the causes of the calamity, alluding to the coup by Greek army officers who toppled then-president Makarios.

Some 167,000 Greek Cypriots were displaced as a result of the subsequent two-phase invasion by Turkey during the summer of 1974.

“What I hope for and look forward to, and the political leadership is striving for, is for everyone to realise at some point, that to be able to celebrate, the solution we seek and must be found, must respect everybody’s human rights.”

Greek foreign minister Nicos Kotzias said this year’s invasion anniversary coincided with a ray of hope because the international community appeared to understand that Cyprus should be a normal, modern state.

In such a state, there was no place for occupying troops, nor anachronistic guarantees “which handed Turkey the pretext to invade Cyprus and to occupy 37 per cent of its territory ever since.”

A string of events were held in the south to commemorate the invasion.

The presidency held an event at the gardens of the Presidential Palace at 8.45pm, featuring a speech by Anastasiades and followed by a concert.

A protest against the Turkish invasion, with Diko leader Nicolas Papadopoulos as the main speaker, was organised by the three parties supporting his 2018 presidential candidacy. The event, held at the Liberty Monument near the Archbishopric, got underway at 7.30pm.

Another protest was staged by the Kyrenia refugees association at the end of Nicosia’s Ledra street, at 7pm.

Earlier, at 6.45pm, Edek’s youth wing was holding a march starting at the Doros Loizou bust near the Ochi square in downtown Nicosia.

As the two sides commemorated the anniversary, each in their own way, Turkey sought to pile on diplomatic pressure on Cyprus to cooperate on energy.

Reha Denemec, an adviser to Erdogan, was quoted by Bloomberg as saying that Turkey wants Israel to use its clout to push Cyprus into allowing a pipeline to pass through its waters so the region’s natural gas can be exported to Europe.

“Israel, as a dominant force in the region, could push Cyprus to agree to a compromise deal on the drilling of gas and construction of an export gas pipeline via Turkey” Denemec said.

A day earlier, the UN Secretary General’s Special Adviser on Cyprus, Espen Barth Eide, was briefing the UN Security Council on the state of play in Cyprus following the collapse of talks in Crans-Montana, Switzerland.

According to the Cyprus News Agency, at the briefing Britain’s ambassador to the UN pointed out that there should be a cooling-off period, after which the talks could continue within the parameters suggested by the UN chief.

For her part, the UN Secretary General’s Special Representative in Cyprus, Elizabeth Spehar, suggested the UNFICYP mandate be renewed for a further six months.