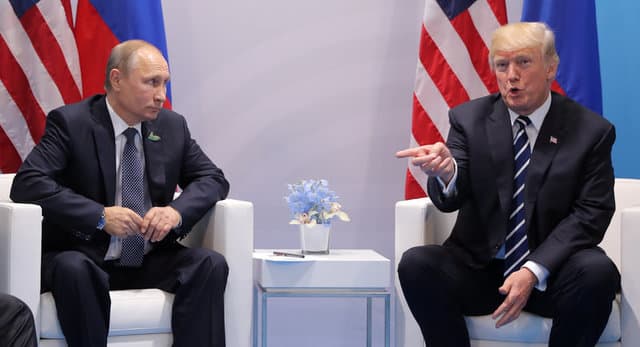 US President Donald Trump gestures as he meets with Russian President Vladimir Putin during their bilateral meeting at the G20 summit in Hamburg, Germany July 7, 2017

The Kremlin believes it is “absolutely absurd” to describe an informal meeting at the G20 summit between US President Donald Trump and Russian President Vladimir Putin as secret or undisclosed, Russian news agencies reported on Thursday.

A White House official said on Tuesday that Trump and Putin had a previously undisclosed conversation during a dinner for G20 leaders at a summit earlier this month in Germany, causing alarm among some US politicians who are unhappy about Trump’s handling of US-Russia relations.

Trump’s interactions with the Russian leader at the summit were scrutinised closely because of allegations that Moscow tried to meddle in the 2016 US presidential election to help Trump win the White House, something Russia flatly denies.

“The use of a term like ‘undercover’ or ‘secret meeting’ raises eyebrows”, Kremlin spokesman Dmitry Peskov told state TV, according to Russian news agencies.

“They had a bilateral meeting that had been officially agreed through diplomatic canals, then they repeatedly exchanged views and remarks on the sidelines. There were no undercover or secret meetings and to assert that there were is absolutely absurd,” Peskov was quoted as saying.

Trump, in a New York Times interview, said his conversation with Putin had lasted about 15 minutes and was mostly “pleasantries.”

Ian Bremmer, the president of political risk consultancy Eurasia Group, has said the meeting lasted about an hour.