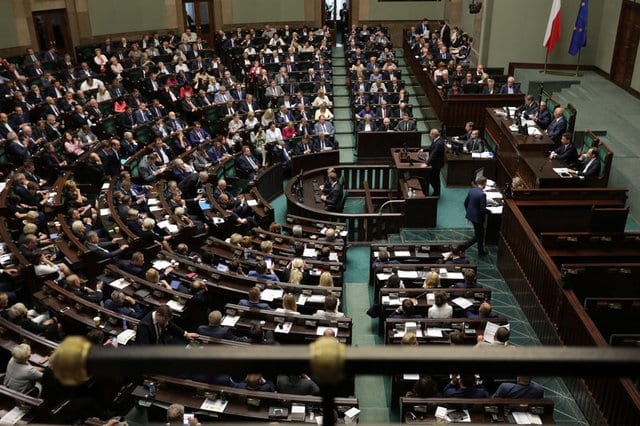 General view of the Polish parliament before the voting on the bill that calls for an overhaul of the Supreme Court, in Warsaw, Poland, July 20, 2017

Polish lawmakers passed a bill on Thursday that would give parliament the power to appoint Supreme Court judges, ignoring objections from lawyers, opposition politicians and the European Union that it undermines democracy and the rule of law.

The vote came a day after the EU gave its largest ex-communist member a week to halt judicial reforms that Brussels says would put courts under direct government control.

If Warsaw does not back down it could face punishments including a “nuclear option” that could in theory lead to the suspension of Poland‘s voting rights in the bloc.

The bill submitted by the ruling Law and Justice party (PiS) was passed by parliament’s lower house after three days of rowdy debate and protests that drew thousands of people acrossPoland. It will now go to parliament’s upper house, where PiS also has a majority.

During the debate, Poland‘s human rights ombudsman, Adam Bodnar, told parliament that the legislation, together with two other bills that will change the way judges are appointed, would “deprive citizens of the right to an independent court”.

“We are planting an explosive under our judiciary,” he said.

PiS says reforms are needed to make courts accountable and to ensure that state institutions serve all Poles, not just the “elites” it says are the support base for the opposition.

But critics say the legislation is part of a creeping push towards authoritarianism by the eurosceptic government.

Since being elected in 2015, PiS has tightened government control over courts and prosecutors, as well as state media, and introduced restrictions on public gatherings.

Last week, parliament passed another bill which ends the terms of current members of the National Council of the Judiciary, one of the main judicial bodies, and gives parliament powers to choose 15 of its 25 members.

Political opponents, rights groups and the EU say the changes undermine the separation of powers between the executive and the judiciary, a fundamental democratic principle.

While PiS – which combines a staunchly conservative world view with a left-wing economic agenda – remains broadly popular among Poles, there have been widespread protests against the plans.

European Council President Donald Tusk, a former Polish prime minister and arch-rival of PiS, said on Thursday he had asked Poland‘s President Andrzej Duda for an urgent meeting over the “political crisis” in the country.

Tusk said in a statement that PiS moves on courts were backward, went “against European standards and values”, harmed Poland‘s reputation and risked marginalising the country.

“The European Union is not only money and procedures. It is first and foremost values and high standards of public life. That is why a wave of criticism of the government is rising in Europe and in the whole West,” Tusk said.

The bill passed on Thursday calls for replacing all Supreme Court judges except those elected by a judicial panel that is to be chosen by the parliament. The Supreme Court’s tasks include validating elections.

Tusk called on Duda – whose signature is required to enact the law – to find a different solution.

PiS has offered no concessions despite the pressure, instead presenting the criticism as unacceptable foreign meddling in domestic affairs of the country, which overthrew communism in 1989 and joined the EU in 2004.

Supporters to US Senator McCain: fight on