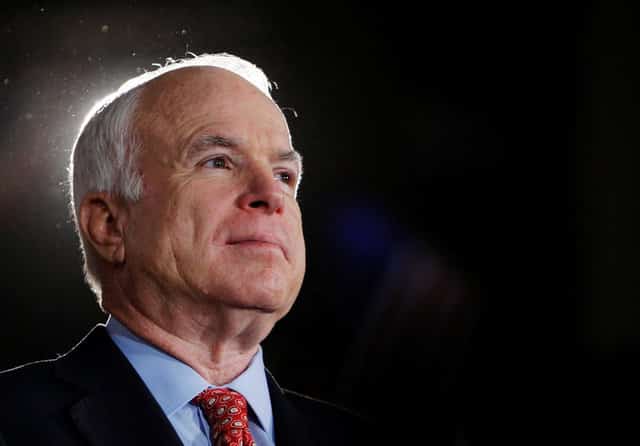 News that US Senator John McCain has brain cancer triggered a wave of support on Thursday from across the political spectrum for the often outspoken former Republican presidential candidate who survived five years captivity as a US Navy pilot during the Vietnam War.

McCain, 80, had surgery last week for a blood clot above his left eye. His office said late Wednesday that the procedure revealed an aggressive form of brain tumor known as glioblastoma.

Wellwishers for a politician who is known for his independent streak and who has never been shy of criticising White House actions included Republican President Donald Trump and former Democratic President Barack Obama.

“He’s a warrior,” Thune told CBS News’ “CBS This Morning” program on Thursday. “I’ve seen him work guys half his age into the ground. He’s a remarkable individual.”

McCain, who ran for the White House in 2008, last year won a sixth term in the US Senate, where he chairs the Armed Services Committee.

Democratic Senator Elizabeth Warren, who earlier this month traveled to Pakistan and Afghanistan with McCain, tweeted: “Trust me, John’s in fighting shape.”

Glioblastoma multiforme is the most common and most deadly form of brain and nervous system tumor, typically killing half its victims within a year. Patients rarely survive more than three years.

McCain‘s doctors said he was recovering from surgery well and praised his underlying health as excellent. His doctors told CNN on Wednesday that he had no sign of neurological impairment before or during his surgery.

Treatment options include a combination of chemotherapy and radiation.

McCain‘s illness has potential policy implications for healthcare legislation and other agenda items in Washington. Republicans hold a narrow 52-48 seat majority in the Senate and McCain‘s absence makes it more difficult to gather the 50 votes needed to pass bills.

He has been recovering at home in Arizona since undergoing his initial surgery at the Mayo Clinic in Phoenix last week. It was not immediately clear when he would return to Washington.

“Further consultations with Senator McCain‘s Mayo Clinic care team will indicate when he will return to the United States Senate,” McCain‘s office said in its statement.

The senator has had non-invasive melanomas removed at least three times. Decades earlier, he overcame injuries suffered at the hands of his North Vietnamese captors.

McCain was re-elected in November to represent the deeply Republican Southwestern state of Arizona.