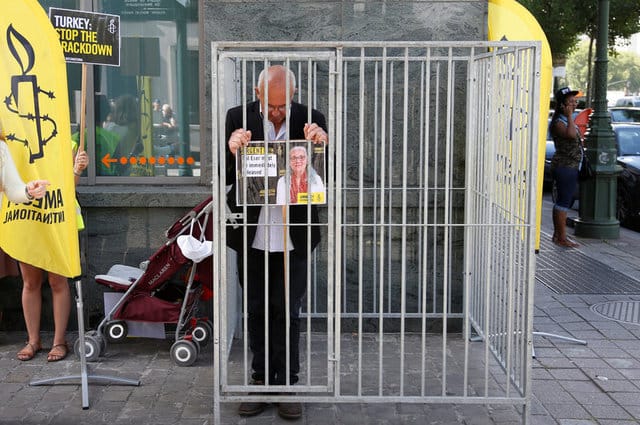 Germany warned its citizens to exercise caution if travelling to Turkey and threatened measures that could hinder German investment there in a sign of growing impatience with a NATO ally following the detention of rights activists.

“Everyone can be affected. The most absurd things are possible,” said Foreign Minister Sigmar Gabriel in a caution to travellers that highlighted alarm at what Berlin clearly sees as the growing unpredictability of President Tayyip Erdogan.

Gabriel broke off his holiday to return to Berlin and deal with the crisis after Turkey arrested six human rights activists including German national Peter Steudtner on accusations of terrorism, the latest in a series of diplomatic rows. Germany, Turkey’s chief export partner, called the allegations absurd.

“We need our policies towards Turkey to go in a new direction…we can’t continue as we have done,” Gabriel told reporters in unusually direct language touching on sensitive commercial matters including corporate investment guarantees.

“We need to be clearer than we have been until now so those responsible in Ankara understand that such policies are not without consequences,” Gabriel said.

“It is not possible for us to accept statements aiming to blur the economic environment based on political motivation, we hope they turn back from this.”

Germany‘s DIHK chambers of commerce said that in the current environment investing in Turkey was hard to imagine.

The six rights activists arrested are among 50,000 jailed pending trial in Turkey in a crackdown on what Erdogan calls a terrorist network that mounted a failed army coup last July. These have ranged from judiciary to journalists including a German national accused of supporting a terrorist organisation.

Turkey has also accused Berlin of supporting a US based Muslim cleric it charges with engineering the coup, and of harbouring Turkish army officers seeking asylum in Germany

Gabriel’s warnings to tourists as well as business travellers could deal a significant blow to southern resorts. So far this year, bookings from Germany have accounted for some 10 percent of Turkey’s tourists.

“Until now there was guidance for certain groups but we’re saying that now applies to all German citizens, not just for those with certain jobs …. Everyone can be affected. The most absurd things are possible,” said Gabriel.

In its latest guidance, the foreign ministry said: “People who are travelling to Turkey…are urged to exercise increased caution, and should register with German consulates and the embassy, even for shorter visits.”

Last year, the number of foreign visitors to Turkey fell to 25.4 million amid a spate of bombings by Kurdish and Islamist militants, the lowest in nine years. The travel sector contributes some $30bn to the economy in a normal year.

Gabriel, in comments that threatened broader economic consequences, said he could not advise companies to invest in a country without legal certainty “and (where) even completely innocent companies are judged as being close to terrorists”.

“I can’t see how we as the German government can continue to guarantee corporate investments in Turkey if there is the threat of arbitrary expropriation for political reasons.”

“We need to talk about how we can develop our Hermes guarantee framework and how we deal with investment loans and economic aid.”

On Wednesday, the newspaper Die Zeit reported that Turkish authorities had several weeks ago handed Berlin a list of 68 German companies they accused of having links to US-based cleric Fethullah Gulen. Turkey accuses Gulen of masterminding the coup attempt, a charge he denies.

The list included chemicals giant BASF BASFn.DE, which confirmed it was on a list that had been passed to it by German police, but declined to comment on the allegations.

Germany was Turkey’s top export destination in 2016, buying $14bn worth of Turkish exports, according to IMF direction of trade statistics. It was also the second biggest source of Turkish imports, at $21.5bn. Only China, at $25.4bn, exported more to Turkey. Gabriel said the situation also affected how the EU dealt with accession programmes for Turkey and said Germany would speak to European colleagues about that in the coming days and weeks.

He also said he could not envisage talks on expanding the customs union to Turkey. Speaking about two months before a federal election, the Social Democrat minister said the new stance had been agreed with conservative Chancellor Angela Merkel.