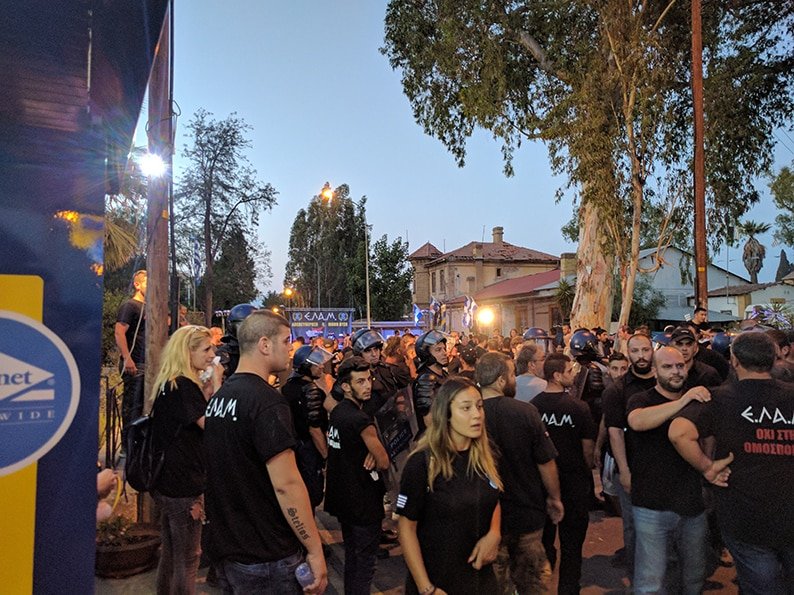 Two crossing points in Nicosia were temporarily closed on Thursday as a precaution ahead of events on both sides of the divide marking the events of July 20, 1974.

The Ledra Palace and Ledra Street crossing points were closed for safety reasons at about 6 pm, a police source told the Cyprus Mail.

The two crossing points had been closed in consultation with the United Nations, the source said.

They were expected to be re-opened after the various events marking the day were over and authorities were confident that all was calm.

All other crossing points remained open.

Disturbances did break out around 8pm near the Ledra Palace checkpoint, but with the access point blocked off, the trouble seems to have been confined among Greek Cypriot youths gathered there.

Cyprus Mail associates arriving at the scene reported jostling and minor skirmishes among a crowd of some 200 people, some of whom were members of far-right party Elam.

Some 50 riot squad officers, already positioned at the site, soon moved in to restore calm.

No injuries or damage to property were reported.

It appears that at some point tensions flared among the Greek Cypriot youths, some of whom were heard chanting names of rival football clubs.

From the other side of the buffer zone, the Mehter Marşı, an Ottoman military song, could be heard playing.

Police said that, earlier, UN personnel momentarily intervened on the Turkish Cypriot side, where a number of individuals were chanting slogans at the Greek Cypriots, and vice versa.

Elam had been holding an anti-occupation and anti-federation protest at the Ledra Palace checkpoint.