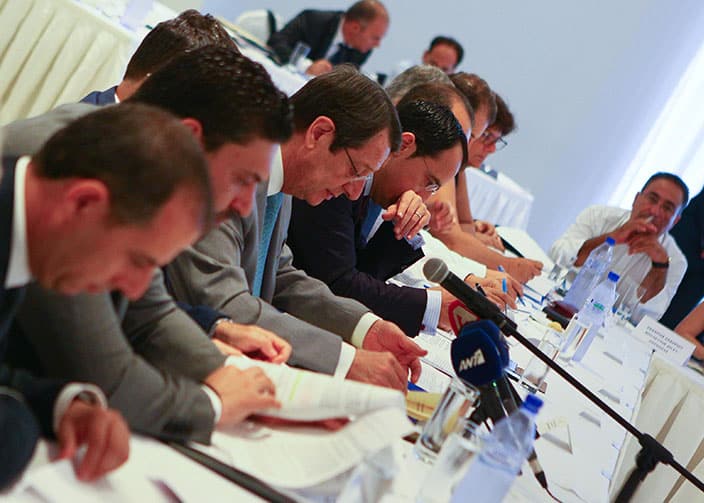 President Nicos Anastasiades on Friday announced new projects for Larnaca worth over €70m, saying the coastal town could no longer be called “the poor relation”.

He announced the projects during a meeting with ministers, mayors and officials and also evaluated ongoing development. Total state funding for Larnaka between 2013 and 2017 had reached € 228m, he said.

“The announcements for new projects that I have made today amount to a total of €70.5 million. Therefore, Larnaca cannot be considered, as some claim, the poor relation,” the president said.

He said Larnaca district was is high on the government’s priorities, and the projects which have already been implemented in recent years and the large developments that have been planned will “give Larnaca the character we all want”.

Anastasiades announced, inter alia, the third phase of the Larnaca to Dhekelia road, totalling €20m, excluding the cost of expropriations. This phase covers a total area of 3.8 kilometres. It starts from the Larnaca nautical club and ends at the roundabout to Pyla.

The government, after completing a study, proceeded on December 29, 2016 to prepare all the necessary plans and has commissioned the construction of the project within the medium-term financial framework for the years 2018 to 2020 with an expected start in 2019.

Moving to other subjects, he said the Larnaca municipality’s request to move their town hall into the preserved building of the old hospital was finally accepted.

It was also decided to allocate an amount of €9.3 million for the construction of a new technical school of Ayios Lazarus, with work starting in January 2018. Another €2 million will be given to complete roadworks within the municipality this year.

With a budget of €1.3 million the Drosia primary school will be upgraded, starting from May 2018, and an outdoor sports facility for the Lyceum of Ayios Giorgios will cost €450,000 while another one in Faneromeni high school is estimated at €130,000.

Within the framework of the medium-term financial framework, it was also decided to upgrade the Evriviadiou Gymnasium, with a total cost of €3.2 million. Also, the primary school of Ayios Theodoros will be upgraded to the tune of €800,000.

“In order to give a more accurate picture of the situation for the city and the province of Larnaca, I report that during the period 2013-2016 an amount of €167 million was spent. Of these, €21 million was used for projects in the Larnaca province’s communities, “the president said.

The president stated the cabinet on July 19 decided that the government will repay the guaranteed loans of the local authorities for a total amount of €185.3 million for all municipalities.

He went on to say that the competition for the development of the port and marina is in its second phase, and referred to the relocation of the oil and gas installations.

The municipality is currently trying to get the private companies to move their facilities to Vassilikos, and the government is aiding the process by constructing a road network in the area in 2018.

Regarding the problem of flooding in winter, the government has granted €383,000 to the municipalities of Larnaca and Aradippou to mitigate the problem. Tenders for construction of flood barriers in Aradippou are expected to be announced before the end of 2017.

The creation of university branches is also planned for Larnaca, and the local authorities are in touch with the University of Cyprus about the creation of an oceanographic centre for which the government has already assigned buildings.

Anastasiades also visited the construction site of the new wing of Larnaca’s general hospital where he welcomed the fact that in the first quarter of 2018 there will be an additional modern hospital and medical centre for the residents of Larnaca.

It’s Premier League title or nothing for United’s Carrick