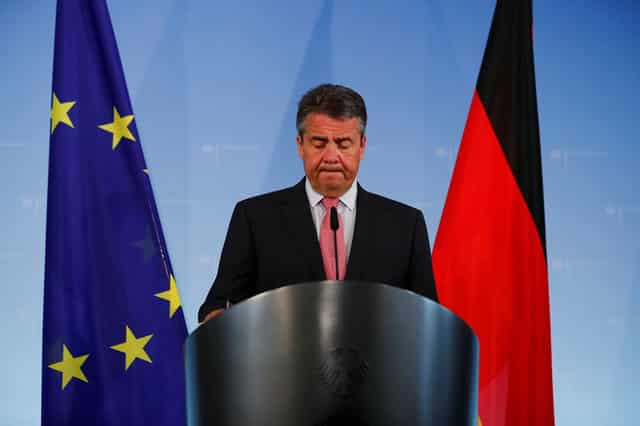 German Foreign Minister Sigmar Gabriel : "Turkey will never become a member of the EU. It's not because we don't want them but because the Turkish government and Erdogan are moving fast away from everything that Europe stands for."

Turkey’s economy minister sought to calm rising tensions with Germany on Friday as Berlin said it was reviewing all applications for arms projects from Ankara.

Tensions between the NATO allies have escalated since Turkey arrested six human rights activists including German national Peter Steudtner on accusations of terrorism; but relations have been strained over a series of often bitter disputes this year.

“One must refrain from words that would cause lasting harm…to the economies,” Nihat Zeybekci said in an interview. “Germany must reassess comments that are inappropriate.”

That means the Federal Office of Economics and Export Control (Bafa) probably cannot issue new export approvals; but projects already agreed will not be affected initially as no international sanctions have been imposed on Turkey.

In 2016 the German government exported armaments worth €83.9m to Turkey. In the first four months of 2017, business worth 22 million euros was approved – for deliveries for the navy and for joint projects with other NATO partners.

Germany has warned Germans travelling to Turkey that they do so at their own peril. Finance Minister Wolfgang Schaeuble was quoted as comparing Turkey with the former communist East German state – the German Democratic Republic (GDR).

“Turkey now makes arbitrary arrests and no longer sticks to minimum consular standards. That reminds me of how it was in the GDR,” he told the mass-circulation Bild newspaper.

Schaeuble said those who travelled to the former Communist East before it collapsed in 1990 were aware that “if something happens to you, no one can help you”.

German officials have complained they have not had full consular access to Steudtner, who was arrested with five others and accused of “terrorism” – an allegation Berlin has dismissed as absurd. Another German citizen was arrested on charges of links to terrorism earlier this year.

The arrests were part of a broader crackdown across Turkish society since a failed coup last July.

Maassen named as an example charges being made against supporters of US-based cleric Fethullah Gulen, whom Ankara accuses of orchestrating Turkey’s failed coup last July. He also said there were attempts to “intimidate those with Turkish roots if they are against President (Tayyip) Erdogan”.

Rights groups and some Western governments say Erdogan is using the crackdown as a pretext to quash dissent. The Turkish government says the measures are necessary given the gravity of the security threat it faces.

Die Zeit newspaper reported this week that Turkish authorities had several weeks ago handed Berlin a list of 68 German companies, including Daimler and BASF that they accused of having links to US-based cleric Fethullah Gulen, blamed by Ankara for orchestrating the coup.

Zeybekci said Germany‘s behaviour in cautioning its citizens over travel to Turkey was “unfortunate”, but he did not see harm accruing to tourism.

So far this year, bookings from Germany have accounted for some 10 per cent of Turkey’s tourists.

Last year, the number of foreign visitors to Turkey fell 30 per cent amid a spate of bombings by Kurdish and Islamist militants, the lowest in nine years. The travel sector contributes about $30bn to the economy in a normal year.

Germany was also Turkey’s top export destination in 2016, buying $14bn worth of Turkish goods. It was also the second biggest source of Turkish imports, at $21.5bn. Only China, at $25.4bn, exported more to Turkey.

German news broadcaster n-tv said it would no longer run adverts that aimed to attract investment in Turkey.