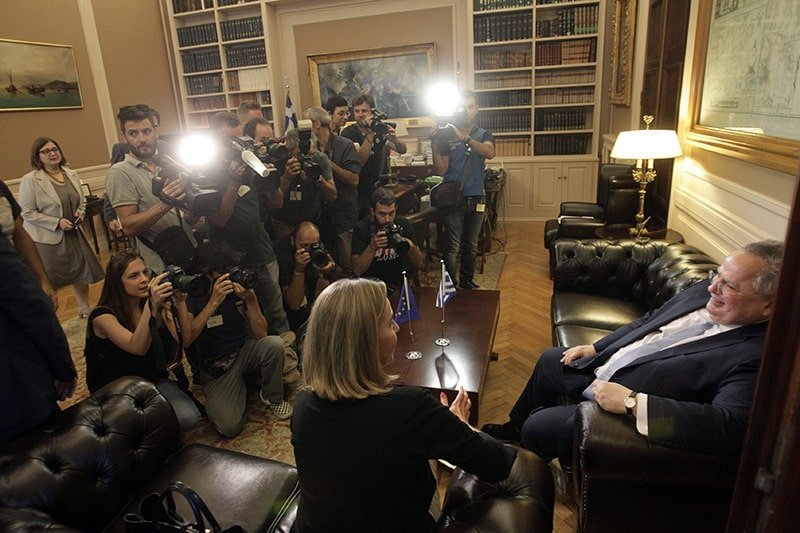 Turkey is thinking in terms that are behind our times Greek Foreign Minister Nikos Kotzias said on Friday, in joint statements with the EU High Representative and Vice-President of the European Commission Federica Mogherini following their meeting in Athens. Mogherini on her part, said there is sufficient substance to continue the process for Cyprus when the political conditions are right.

“Our foreign policy is to keep the roads open for all the Balkans and Turkey toward a modern, progressive way of exercising transnational relations and foreign policy. And if we can help by even one thousandth to avert a return to the past, it is a gain for our culture, our two countries and for all,” Kotzias said.

According to the Athens News Agency, the meeting with Mogherini focused on the global strategy of EU foreign policy, with emphasis on European enlargement toward the Western Balkans and Turkey, but only on condition that they meet the necessary accession criteria.

Asked about Turkey and its record on human rights violations, both Kotzias and Mogherini said it was important for Turkey to make the required steps toward the EU.

“We want Turkey to be a good neighbour,” the Greek foreign minister said, while noting that Greece “has only to gain” if Turkey was on a European path.

“As a friend of Turkey, I feel sorrow when I realise that it is thinking in terms that are behind our times,” Kotzias added. “In the Cyprus issue, also, when it thinks it must have rights of intervention, occupation troops. These are the phenomena of another era that has now ended,” he said.

With respect to the Cyprus issue, Mogherini expressed her conviction that there was “sufficient substance to continue the process when the political conditions are right.”

“We hope to receive the united island as an EU member-state,” she added in response to questions, explaining that this means that “any solution of the Cyprus issue must be consistent with and compatible with the EU security architecture and the European acquis, as it is defined, on what is acceptable and what is not.”

Mogherini also noted that the issue of human rights in Turkey would come up during her meetings with the Turkish foreign minister and European affairs minister this week.

“Clearly we expect Turkey to make some steps that show it is bound by the same principles that it signed when it became a member of the Council of Europe and a candidate for EU membership,” Mogherini commented. She underlined that human rights must be respected and upheld, including freedom of the press and the rights of the opposition.

A minute with Alicia Panayiotou Singer