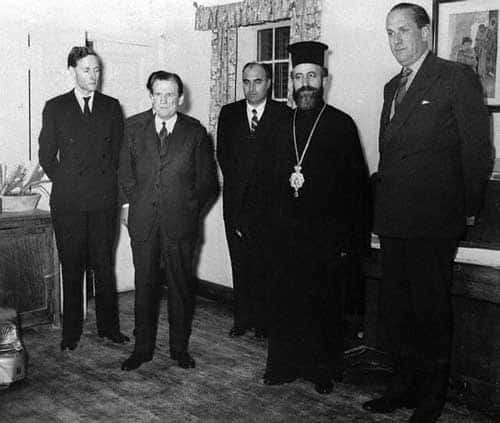 On January 28, 1956, the British government proposed to Archbishop Makarios, through Colonial Secretary Alan Lennox-Boyd, the “Harding Plan” which provided for self-determination in 10 years with minimal involvement of the Turkish Cypriots.

It was a unique opportunity for Cyprus. Makarios, however, rejected it, he wanted to improve it. Lennox-Boyd stood up and told him tersely, “God save your people”.

Sixty-one years on, in the early hours of the July 7, 2017, after Cyprus had gone in the meantime through very hard times, adventures, a coup d’ etat, an invasion and occupation by Turkey, UN Secretary General Antonio Guterres, in Crans-Montana in Switzerland told leaders Anastasiades and Akinci after the collapse of the Cyprus talks: “I wish the best to all Cypriots, north and south”.

So, we have two wishes addressed to the people of Cyprus. The difference is that in the second wish, “north” and “south” appears, which was not there in the first wish. The reason for this addition is a sad story for the Greeks and Turks of Cyprus, who for all these years have been chasing something better but eventually achieved the opposite. Until they reached “the bottom of the ladder of evil” as Greek poet Costis Palamas put it.

Many Cypriots wonder which is the position today. In which direction are we sailing? Could we recommence a dialogue for the re-unification of the country?  And if we do so, what could be the outcome?  How can one address issues like security, the Turkish army, guarantees, territorial adjustments, properties, settlers, the “large” and “small” vetoes of the Turkish Cypriots, the four freedoms for the Turkish citizens, virgin birth and many others.

There may be another attempt after the presidential elections – before the elections any efforts will be aborted by the many ambitions for the top job.  Of course, the question remains:  Can national issues be resolved after half a century?  When the train for a solution was at our station we refused to embark, because some people did not want it.  Now we are desperately running after it.

But anyway, what will happen if a federal solution proves unachievable?  What will be the future of this beautiful island?  How will the main players react?

Turkey
My opinion has been and still is that in the aftermath of the 1960 treaties, and especially after Turkey won the war in 1974, whether we end up with a federal solution or one of the other eventualities, Turkey will insist and will have a role in Cyprus. On account of our sins and blunders of the 1960-1974 era, with the coup d’ etat at the pinnacle, Turkey has managed to justify her own sins and so nobody ever condemned her.

Greece
She wants to help but for the past 60 years she has not been able to effectively deliver. At times, her advice was constructive but on other occasions her guidance or intervention was unproductive.  The coup d’ etat of 1974 is also debited to her.  In the remote part of the Eastern Mediterranean where Cyprus lies, Greece can exercise some influence, but not of real substance.  Furthermore, she cannot cover Cyprus in an effective manner in the military field.

Israel and the Arab Countries
I shall be very brief.  No country in the world, irrespective of friendships, is prepared to sacrifice her own children for the sake of another country.  She cannot justify such a sacrifice to her own people unless a major national interest is involved.

Europe
She can offer some institutional assistance but her effective involvement is doubtful.  After all, Europe has proved time and again, through her decisions, that her interests with Turkey are predominantly taken into account.  It should also be noted that Cyprus can block the accession of Turkey to Europe, as long as Turkey wishes for accession.

The British
They will be the masters of what goes on behind the scenes.  They will supervise and follow up everything, with their military bases and their wider interests in the area as the main objectives.

And what will happen to Cyprus, the island with a history and civilization of 10,000 years, which has recently acquired a potential dowry of billions of dollars due to natural gas – which may prove a blessing or a curse?

Here are what I believe to be the various eventualities if the last efforts for a federal solution are doomed to failure.

Partition
Ankara will speed up her political and diplomatic engines towards this direction.  The effort will be to partition Cyprus and create a new recognised state on the basis of today’s occupation line.  There will be additional large Turkish and other investments and Famagusta will be re-erected.  Turkey will be the Big Brother.  I believe that in such a case Ankara will claim, possibly through military means, a large stake in the hydrocarbons.

The Greek Cypriots will of course react strongly with the help of Greece and other countries, in order to avert the definite partition, which will result in Turkish political, military and economic hegemony over 37% of Cyprus.  It is difficult to predict the outcome.

Annexation
This would concern the territory occupied by Turkey (37% of Cyprus).  Turkey annexed in 1939 the district of Alexandretta (Iskenderun), which used to belong to Syria.  Other annexations took place in our area in recent years:  The Golan Heights of Syria and the West Bank of Jordan (by Israel) and Ukraine’s Crimea (by Russia).  Turkey has sent out many signals in this direction in recent years. In such a case, the whole occupied Cyprus territory will be incorporated into the trunk and become part of Turkey. It will end up as one of her districts, probably with a special status. Turkey will also claim part of the hydrocarbons.

Velvet divorce
The divorce would be between Greek Cypriots and Turkish Cypriots, including the return of territory to the Greek Cypriots. In such a case, the existence of two states on the island of Cyprus will be agreed and the hydrocarbon reserves will also be equitably divided.  Such a solution will of course cause very big confrontations and objections on the Greek Cypriot side, because a Greek signature will be used to divide Cyprus into two parts.

Full occupation
This may one day occur if we are not extremely cautious, even if one of the other solutions is initially adopted. It is nightmarish. It is highly unlikely but not impossible, because Turkey has proven to be a domineering, unpredictable and dangerous country.  It is the possible intention of Turkey to occupy the whole of Cyprus in the remote future, by using her strong military machine.  Such a detestable outcome will probably cause a Greco-Turkish war, a collapse of the South-Eastern wing of NATO, an earthquake in Europe, a reaction by Israel and other countries.  However, a great lot of wisdom and caution is needed.  What Turkey did back in 1974 was also impermissible.  But she did it, taking advantage of the prevailing circumstances, our many mistakes and the weakness of Hellenism at that time.

The wishes of Alan Lennox Boyd and Guterres are floating at present in the blue seas of Cyprus. I pray that the God of Cyprus and at the same time our wise actions – for God alone is not enough – will lead to peace and prosperity and avert any negative outcome.

Nicos Rolandis is a former commerce minister, foreign minister, MP and president of the Liberal Party

Collapse of talks is disappointing but understandable

For whom does the bell toll?