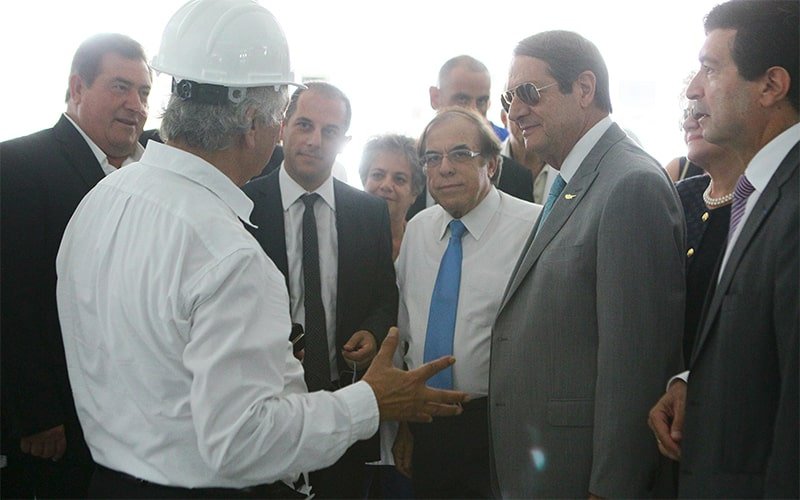 Anastasiades in Larnaca this week

President Anastasiades might not have decided whether he would stand for re-election, as he and his spokesmen maintain, but this has not stopped him from engaging in electoral campaigning. This started a few months ago and was back in full swing this week after the interruption caused by the conference in Switzerland and its aftermath, which nevertheless had an electoral element to it.

The campaigning is so blatant it seems astonishing that we are still being served the myth of an undecided president. State spending decisions, opening up of public positions and the announcement of new infrastructure projects – mainly construction of roads – are obvious signs that an incumbent would seek re-election. In fact, the only president not to have resorted to this practice was Demetris Christofias who did not seek re-election because he had bankrupted the country. For the first time there was no money in state coffers to bank roll a drive for a second term.

Anastasiades, in contrast, thanks to his government’s prudent management of state finances forced on it by the international lenders, has funds available to squander to bolster his re-election prospects. In the last few days, it was announced that the government would be contributing another €166 million to cover part of the losses suffered by workers’ provident funds in the 2013 bail-in of the Bank of Cyprus and bankruptcy of Laiki. The state had already paid €300 million, the latest sum enabling the government to honour its pledge to cover 75 per cent of the losses.

This news was welcomed by the association of bondholders that are demanding compensation from the government for losing all the money they invested in bank bonds. It said it expected the government to “respect and implement the constitutional principle of equality.” The association will contest the presidential elections with its own candidate, as a protest against the state’s refusal to compensate its members. Meetings with the president yielded no result, but as the election draws closer anything is possible. Sykala, the former depositors of Laiki, have also been pressuring the government for compensation.

On Friday Anastasiades took the campaign to Larnaca. He had already visited Paphos with half a dozen ministers a few months ago and announced a host of infrastructure works and he did the same for Larnaca on Friday so the town “would no longer be considered, as some claim, the poor relative.” Projects that would cost the taxpayer €70.5m would be undertaken over the next year, while the president boasted that from 2013 to 2017 the state’s total expenditure for Larnaca municipalities and communities amounted to €228m. Whenever a president wants votes he cites total spending figures to prove his government’s caring generosity. Listening to Anastasiades taking credit for sanctioning the spending of €130,000 for “outdoor sports facilities” at Phaneromeni Gymnasium, left no doubt that the Larnaca visit was part of his campaign.

Meanwhile, a couple of hours before the Larnaca visit, finance minister Harris Georgiades was on a radio show assuring us that the government remained committed to a balanced budget and that it was spending only what it could afford. It was not increasing the public debt in order to finance projects he said. He did not explain, however, why some of the available funds were not used to lower the public debt. At times when state revenue is high surely the prudent policy is to repay some of the public debt in order to reduce it. Georgiades made a virtue out of the fact it would not increase.

Economic prudence is always the first casualty of an election campaign in which the costly construction of new roads features prominently. As Georgiades proudly said, the government would be investing in significant improvement of the Paphos-Polis road (only because the cost of a new highway is prohibitive), building the Limassol-Saittas highway, which is unnecessary and also going ahead with plans for the Nicosia perimeter road. Road building is a popular measure as it gives business to big contractors, creates jobs, is a visible project to voters and leads to land appropriations from which many people make money. It is a proven vote-winner.

There are no votes to be won from the government reducing the public debt by two or three per cent. Despite the economic crash of 2013, the worst recession in our history and the need for an assistance programme, our politicians have learnt nothing. They still labour under the illusion that the best way to win votes is to show they are good at mindlessly spending the taxpayer’s money.