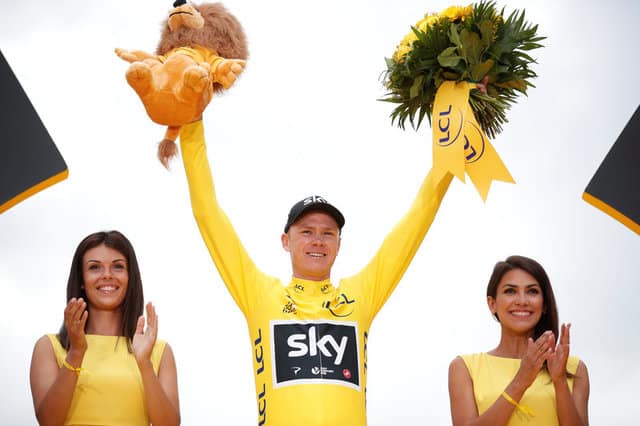 Booed by the locals in Marseille 24 hours earlier, Chris Froome charmed huge crowds in Paris on Sunday with a classy victory speech after claiming his “toughest” Tour de France title.

The British rider was once showered with urine thrown by fans during the 2015 edition before wiping himself down to claim his second title in cycling’s most famous race.

Two years on he has doubled that total after riding into the capital with a 54-second advantage over Colombia’s Rigoberto Uran, with Frenchman Romain Bardet in third place.

While French cyclists may not flock to buy replica Team Sky jerseys any time soon, they are at least beginning to respect Froome’s astonishing achievements.

He looked emotional on the podium after being presented with the yellow jersey that Team Sky monopolised for all but two days of the three-week race, first with Geraint Thomas then with Froome who held off his rivals with the help of his team mates.

“This Tour has been my toughest challenge yet. The performances of my rivals have pushed me harder than ever before,” Froome said, reading from notes that he managed to drop while addressing the onlookers.

“I want to pay tribute to all the riders for their sportsmanship over the past three weeks. We race hard against each other, we suffer together but the most special thing is the camaraderie and friendship within the peloton.”

Froome, who silenced the boos of the partisan, Bardet-supporting Marseille fans with a time trial that effectively won him the race, failed to take a stage this year — unlike in his 2013, 2015 and 2016 victories when he had bigger winning margins.

With team mates such as Mikel Landa, Michal Kwiatkowski and Mikel Nieve relentless at the head of the peloton virtually every day, Froome was never dealt any knockout blows — even if he did look vulnerable in the Pyrenees.

“I want to thank my team, Team Sky,” said Froome, who has signed a new three-year contract. “I could not have achieved this victory without you. On and off the bike, your dedication and passion means this is a team I am proud to be a part of.

“Each time I’ve won the Tour has been so unique, so different. It’s been such a battle to get to this point.”

The battle goes on and next year Froome will be favourite to emulate the greats.

“It is an honour even to be mentioned alongside those who formed such an important part of the Tour’s history,” he said.