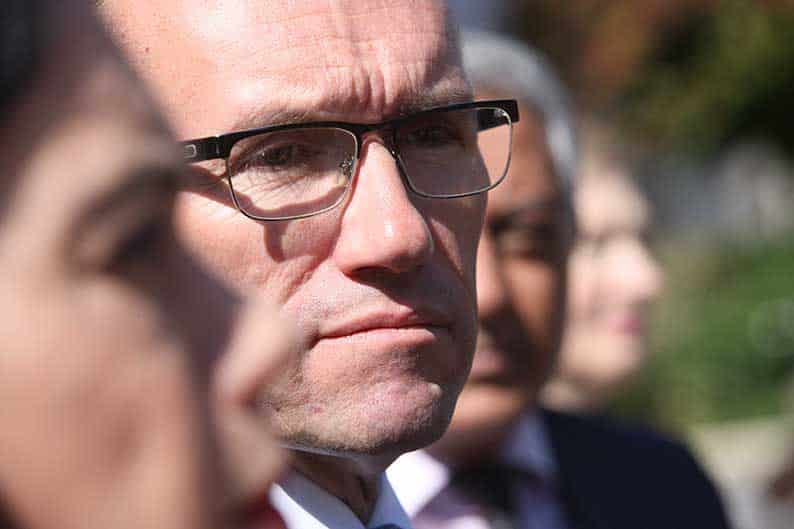 By Jean Christou and Evie Andreou

New calls went out on Monday from the hardline parties for the replacement of UN Special Adviser Espen Barth Eide after he was showered with blame and called a liar in a similar series of attacks on Sunday.

On Monday, Diko leader and presidential candidate Nicolas Papadopoulos, also dragged President Nicos Anastasiades into the equation saying he had given everything away to the Turkish side.

Eide’s statements proved, he said, “the collapse of the myth that the international community will attribute any responsibility to Turkey”.

Papadopoulos said Anastasiades “gave away all or almost all”, and instead of congratulations from the international community, he received only accusations.

“The supporters of any solution must finally be convinced that with the policy of generous concessions, the desired results are not achieved. The congratulations from foreigners only last as long as our concessions last,” he said.
On Sunday, Diko called Eide a liar. “In spite of being proven wrong by the facts, the Greek foreign minister and others that were present at the July 6 dinner, he insists on lying with audacity,” the party said.
Edek, the Greens and the Solidarity Movement also called for Eide’s head, accusing him of taking Turkish positions.
“His efforts were, through verbal acrobatics and invoking the confidentiality of procedures, aimed at concealing Ankara’s responsibilities for Crans-Montana’s,” the Greens said.

Solidarity’s Eleni Theocharous said: “We have long noted that the infamous Eide behaved as an agent of Turkish interests,” she said.

“The latest developments are a cause for concern,” Akel chief Andros Kyprianou said, adding that it also appeared, that though Turkey was mainly responsible for the failure, the Greek Cypriot side may also have made some mistakes.

“It does not matter what we say here. Much more important is what will be recorded in the relevant reports that will be prepared by the international community,” he added.

Kyprianou expressed his concern for the developments since Crans-Montana. He said Turkish

Foreign Minister Mevlut Cavusoglu raised the spectre of a solution outside the framework of the UN, and Turkish President Tayyip Erdogan was talking of a Plan B and a Plan C.

Kyprianou also commented on statements by Archbishop Chrysostomos on Sunday.

Chrysostomos called for Eide’s replacement in an interview with CyBC on Sunday. He said the talks must be terminated and started over in a different format.

The dialogue, he said, must be about the creation of a “functional, viable and proper state, without any vetoes”. The archbishop was referring to the right of veto of the Turkish Cypriot vice-president, which was deemed as problematic by the Greek Cypriots, who felt that the minority had the right to overturn the will of the majority.

“If the settlement solution will include vetoes, then it will not function properly,” Chrysostomos said.

He also urged the Turkish side, “if it truly wants the establishment of a proper state (in Cyprus) to work toward that end, otherwise, there will be a construction that will collapse and we will be in chaos”.

Chrysostomos also wondered if a federal solution based on what every Cypriot government agreed to at the talks, would be viable, even if Turkey said it would give up its intervention rights and said yes to everything.

He said that if he asked the president whether this federation would be viable, he believed that he would get a negative answer.

As for Eide, the archbishop said that the government ought to ask for his replacement and referred to the statements by Greek Foreign Minister Nikos Kotzias who accused the UN official of lying over what happened in Switzerland. Athens, on Friday, asked the UN to put Eide in his place for the ‘false statements’ he had been making about who bore responsibility for the deadlock. The memo sent to the UN, reportedly cited Eide’s “biased support for Turkey”.

The archbishop also criticised some Greek Cypriot politicians on the way they present “historical facts”. “In 1963, we had a Turkish uprising in Cyprus. I am sorry to say that some people and even some who have high positions in the government, say that we have slain the Turks without shame and that what happened was intercommunal riots,” he said.

“If some are historically illiterate, then they should read a little history. We have lived those events. Those who did not live them, they ought to, at least, read history, and learn before speaking,” he said.