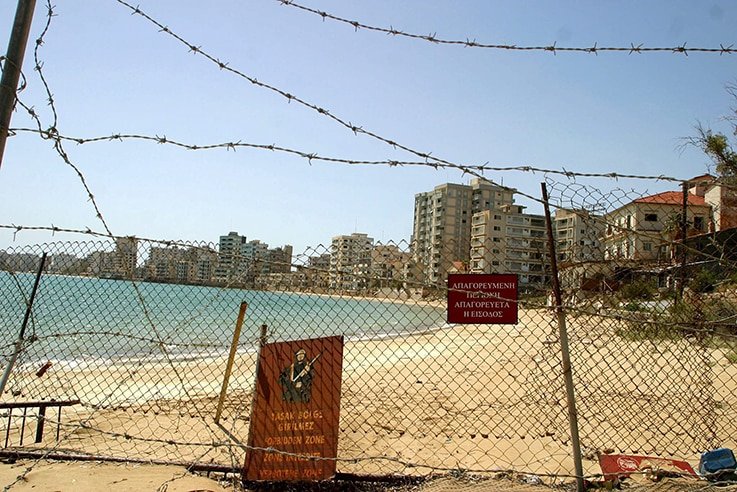 The closed city of Varosha

The Turkish side may allow the return of 20,000 refugees to the fenced city of Varosha and to three Maronite villages, media reports in the north said on Monday.

These new plans, the daily said, include the return of 4,000 Maronites to the Maronite villages of Karpasha, Ayia Marina and Asomatos, which are under the control of the Turkish military, and of 16,000 Greek Cypriots to the fenced city of Varosha, in Famagusta.

The report follows the visit in the north last week of Turkish Foreign Minister Mevlut Cavusoglu who discussed with Turkish Cypriot leader Mustafa Akinci and political party leaders the next steps for the Cyprus talks. Cavusoglu had said that the aim was to prepare a roadmap for the future.

‘Deputy prime-minister’ and head of the Democrat Party Serdar Denktash said in an interview to Kathimerini that was published on Sunday that the Turkish Cypriot side may announce initiatives that will surprise the Greek Cypriots and the international community the way it did with its decision to open the crossings in 2003. He added that these decisions would be announced in due time.

Turkey said after the collapse of the talks that it would seek another way on the Cyprus issue outside the parameters of the UN, speaking of a plan B.

Former parliamentary representative of the Maronites, Antonis Hadjiroussos, told the Cyprus Mail that even though the Maronite community had access to its other two villages in the north – Kormakitis and Karpasha – Ayia Marina and Asomatos are under Turkish military control and are currently off limits.

“Ayia Marina and Asomatos are soldier camps, no one is allowed to live there, Karpasha is a military zone but residents are allowed,” he said.

Akinci announced in March that Maronites from Ayia Marina would soon be free to return to their village, as the Turkish army was preparing to withdraw from the village. Soon after, reconstruction of the derelict village would begin, he had said.

However, just last week Turkish Cypriot authorities said that the idea had to be abandoned until a settlement of the Cyprus problem.

Hadjiroussos said that recently around 100 Maronites – mostly pensioners – have resettled in Kormakitis and Karpasha – taking advantage of the new support scheme the government announced to encourage the enclaved to return to their villages in the north. Before this measure, Hadjiroussos said, there were fewer than 100 Maronites living in the north – in Kormakitis and Karpasha – of the 1,200 that were initially staying there since 1974.

The mountains are alive with the sound of music