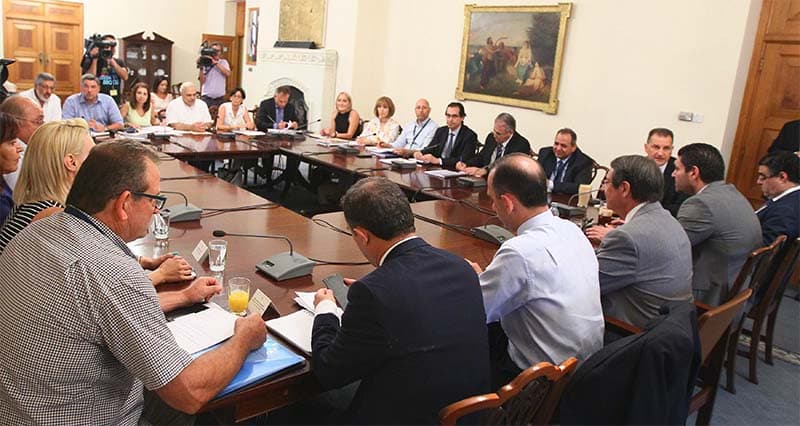 The meeting at the Presidential palace on Tuesday

The government on Tuesday sought to assuage the concerns of the nine communities of Vasilikos, near Limassol, regarding the planned storage of used car tyres in the area.

The reassurances were given during a meeting held at the Presidential Palace, chaired by President Nicos Anastasiades and attended by a number of ministers and the concerned community leaders.

The affected communities were given detailed explanations about the method of transfer of tyres to the area and their subsequent storage in the Vasilikos area.

Last week it was revealed the government decided to move 4,500 tons of used tyres stockpiled at a quarry near Dali, outside Nicosia, to a site at the Vasilikos cement factory.

The used tyres are to be processed at the cement factory, which has agreed to process double the amount than it currently does.

As for the tyres’ storage site, Agriculture and Environment Minister Nicos Kouyialis said it would feature multiple fire points.

Earlier this month a large fire broke out at site where flammable substance was stored next to used tyres, piles of which went up in flames.

In addition, said Kouyialis, another storage site would be created some 300 meters from the current site.

“This matter is expected to be definitely resolved over the next few months,” he added.

For his part, Lefteris Foka, chairman of the Vasilikos communities’ coordinating committee and community leader of Kalavasos, said they received “explanations which are acceptable.”

The local municipalities of Vasilikos were protesting that their area was being turned into a dumping ground, citing concerns over pollution and clean air.

They had also fired a warning shot that they would suspend any licensing for facilities in the area.

At Vasilikos the government plans to build an energy centre, which would include a liquefied natural gas terminal, fuel storage tanks, a privately-owned electricity station and other industrial facilities – all concentrated within an area of 25 square kilometres.