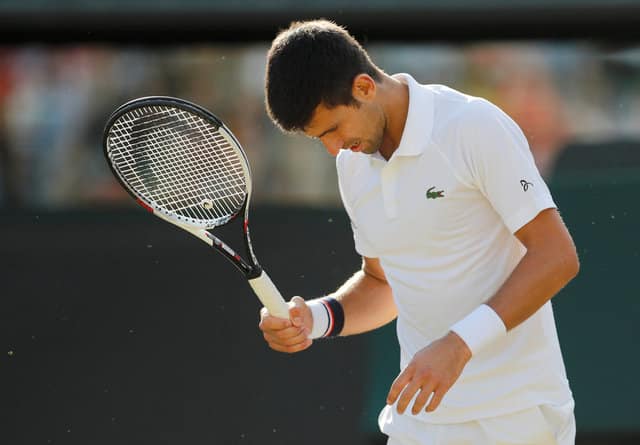 Novak Djokovic retired injured during his Wimbledon quarter-final match against Tomas Berdych on 12 July. He then said he had been suffering from an elbow problem for over a year and a half

Twelve-time grand slam champion Novak Djokovic will miss the rest of the tennis season, including next month’s U.S. Open, to recover from a right elbow injury, the Serbian said on Wednesday.

The 30-year-old posted a video statement on Facebook in which he said he had decided to let heal the injury which caused him to retire during his Wimbledon quarter-final against Czech Tomas Berdych earlier this month.

“I’ve made a decision to not play any competitions or tournaments for the rest of the 2017 season,” Djokovic, down at number four in the world rankings for the first time since 2009, said. “It’s a decision that had to be made.”

Djokovic then told a news conference he had decided to take six months off after consulting doctors and specialists in Serbia and abroad.

“I have been dragging this injury for the past 18 months and it has escalated in the last month or two,” Djokovic, who will miss a grand slam for the first time since 2004 at Flushing Meadows, said. “It became very painful at Wimbledon, where unfortunately I had to retire against Berdych.”

He said surgery would not be necessary, however.

Djokovic has endured a difficult 12 months on the court, losing all the grand slam titles he held simultaneously after winning the 2016 French Open. He also lost his world number one ranking to Andy Murray at the end of last year.

In May he split with his entire coaching team, having parted with Boris Becker at the end of last year.

“I will definitely play in the first week of next season,” he said. “I have enough time to recover as the first tournament of 2018 is six months away.

“Having accomplished so much in my career I will find it difficult not to aspire to win tournaments.”

“Believe it or not, I am actually looking forward to playing the top seeds in the third or fourth round of major tournaments because for once the pressure will be off.”

Djokovic was troubled by the elbow last season and again this year when he pulled out of the Miami Open.

He said it had also been difficult having achieved the career grand slam at last year’s French Open.

“That was the one I craved for because it was the only one missing from my grand slam collection,” he said.

“I have to admit that I wasn’t quite as poised after lifting the Roland Garros because I felt flat after all the exertions.”

The Serb will take heart from the resurgence of Roger Federer and Rafael Nadal this year after they both took injury time-outs last year. Federer won the Australian Open and Wimbledon with Nadal taking the French.

“Congratulations to both of them for their achievements this season and throughout their careers,” he said.

“The bright side is that now I have time to heal and build up my body and strength and focus on elements of my game that I never had time to work on.

“I want to play professional tennis for many years to come.”