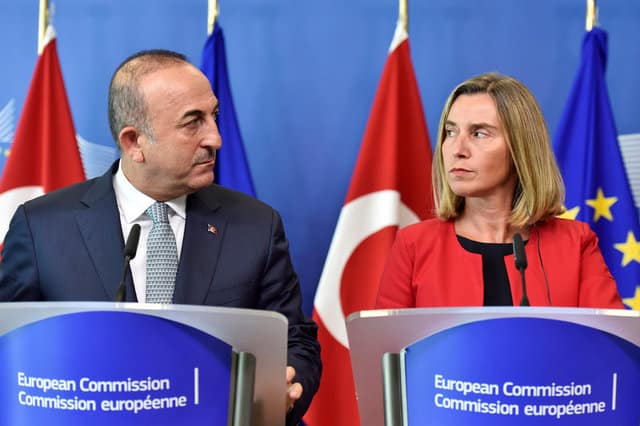 The European Union on Tuesday delivered its most public criticism yet of Turkey’s security crackdown since last year’s failed coup, saying there could be no progress on Ankara’s bid to join the bloc without an end to human rights abuses.

Speaking after a meeting with Turkey’s foreign and EU affairs ministers in Brussels, the European commissioner who oversees the membership talks said he needed to see “a reversal of the trend” towards authoritarianism.

Despite what Mogherini described as a constructive and open meeting, the tensions over Turkey’s aspirations to join the EU were on show, as both sides sparred publicly over whether new areas of negotiation, or chapters, should be opened.

Cavusoglu also responded to Mogherini and Hahn’s criticism of the trial of prominent journalists and the arrest of 10 rights activists by telling the bloc not to be misled by “pseudo-journalists who help terrorist activities”.

“There are those journalists, soldiers, politicians who helped the coup attempts last year. They need to also face the sentences that are necessary,” Cavusoglu said.

Turkey’s imprisonment, pending trial, of 50,000 people and the detention or dismissal from their jobs of some 150,000 more have brought its decade-long talks to join the EU to a halt. One EU diplomat described the accession bid as a “charade”.

While the EU has condemned the July 2016 coup attempt against President Tayyip Erdogan, the extent of the crackdown and the deterioration of human rights have alienated Brussels.

Although a deal with Turkey to prevent migrants leaving its shores for Europe is still holding, many areas of negotiation on upgrading diplomatic and economic ties with Ankara are now blocked, including talks on visa-free travel for Turks in the EU and deepening free trade links, the EU diplomat said.

“Turkey is clearly moving away from EU standards. The destruction job against human rights and rule of law continues,” the diplomat said, noting some EU countries now wanted a discussion on cutting the money that Turkey receives to help it prepare for eventual EU accession.

Turkish officials say the scale of the crackdown, which has broad popular support at home, is justified by the gravity of events on July 15, 2016, when rogue soldiers commandeered tanks, fighter jets and helicopters, bombing parliament and government buildings in their attempt to seize power.

EU officials had initially held back from public criticism of Turkey, a vital ally of the West in the war against Islamic State militants and in tackling Europe’s migrant crisis.

But Turkey’s escalating row with Germany over access to Turkey’s NATO air bases and the detention of the head of Amnesty International in Turkey have driven relations to a new low.

Mogherini met the secretary general of Amnesty, Salil Shetty, before the meeting with the Turkish officials and was photographed holding up a petition signed by almost a million people calling for the release of rights activists in Turkey.

“The European Union has to recognise that with the arrest of the Amnesty chair and director, Turkey is really signalling that they don’t really care about any kind of consequences,” Shetty told reporters.

US Senate advances on healthcare, with dramatic return by McCain