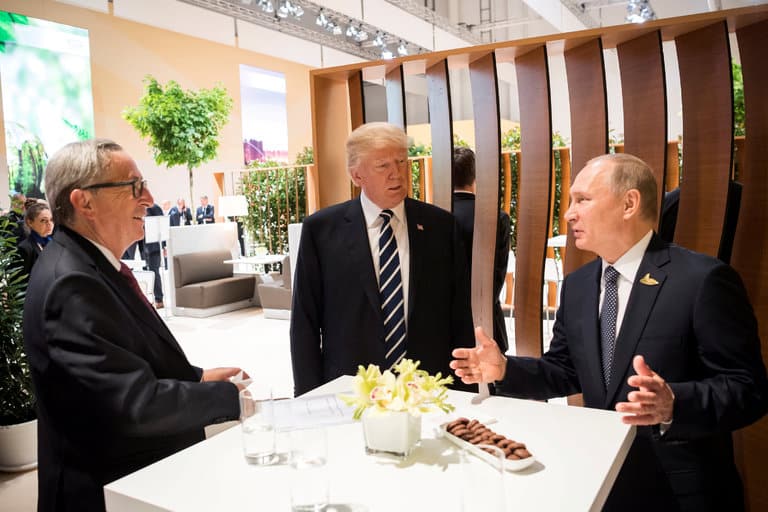 President Trump with President Vladimir Putin of Russia and Jean-Claude Juncker, the president of the European Commission, during a G-20 meeting

The European Union warned on Wednesday that it was ready to act within days to counter proposed new US sanctions on Russia, saying they would harm the bloc’s energy security.

Sanctions legislation overwhelmingly approved by the US House of Representatives on Tuesday has angered EU officials for breaking transatlantic unity in the West’s response to Moscow’s annexation of Crimea from Ukraine in 2014 and its support for separatists in eastern Ukraine.

Brussels also fears the new sanctions will harm European firms and oil and gas projects on which the EU is dependent.

“The US bill could have unintended unilateral effects that impact the EU’s energy security interests,” EU chief executive Jean-Claude Juncker said in a statement issued after a meeting at which European commissioners were united in their views, according to a senior EU official.

“If our concerns are not taken into account sufficiently, we stand ready to act appropriately within a matter of days. ‘America First’ cannot mean that Europe’s interests come last,” he said, mentioning President Donald Trump’s guiding slogan.

European Commission officials say the bloc could use EU regulations allowing it to prevent the application of extraterritorial measures by the United States; demand a US promise to exclude EU energy companies; or impose outright bans on doing business with certain US companies. In addition, the EU could file a complaint at the World Trade Organisation.

However, most measures taken by Brussels would require approval from all 28 EU member governments, which could expose potential differences in individual nations’ relations with Moscow and Washington.

Despite changes to the US bill that took into account some EU concerns, Brussels said the legislation could still hinder upkeep of the gas pipeline network in Russia that feeds into Ukraine and supplies over a quarter of EU needs. The EU says it could also hamper projects crucial to its energy diversification goals, such as the Baltic Liquefied Natural Gas (LNG) project.

The sanctions target the disputed Nord Stream 2 project for a new pipeline running from Russia to Germany under the Baltic Sea, bypassing traditional transit routes through Ukraine.

A list prepared by the EU executive, seen by Reuters, shows eight projects including those involving oil majors Anglo-Dutch Shell, BP and Italy’s Eni that risk falling foul of the US measures.

Voicing frustration at the fraying in the joint Western approach to Moscow, Juncker said “close coordination among allies” was key to ensuring sanctions are effective.

The EU, the Commission said, is raising its concerns via “all diplomatic channels”.

It was unclear how quickly the US bill would reach the White House for Trump to sign into law or veto. The bill amounts to a rebuke of Trump by requiring him to obtain lawmakers’ permission before easing any sanctions on Moscow.

Rejecting the legislation – which would potentially stymie his wish for improved relations with Moscow – would carry a risk that his veto could be overridden by lawmakers.

In response to Russia’s annexation of Crimea and role in the pro-Russian insurgency in eastern Ukraine, the EU imposed curbs on business with Russian energy, defence and financial sectors in July 2014, and these will remain in place until January 2018.

But European energy industry sources voiced alarm at the potentially wide-ranging damage of the new US measures.

“This is pretty tough,” one industry source told Reuters. “We are working with EU officials to see what safeguards can be anticipated to protect our investment and give us certainty.”

But EU officials warn the legislation would also hit plans for the LNG plant on the Gulf of Finland in the Baltic Sea, in which Shell is partnering with Gazprom.

The EU document indicated the sanctions might jeapardise Eni’s 50 per cent stake in the Blue Stream pipeline from Russia to Turkey as well as the CPC pipeline, carrying Kazakh oil to the Black Sea, in which European groups BG Overseas Holdings, Shell and Eni are involved.

It further warns that BP would be forced to halt some activities with Russian energy major Rosneft.