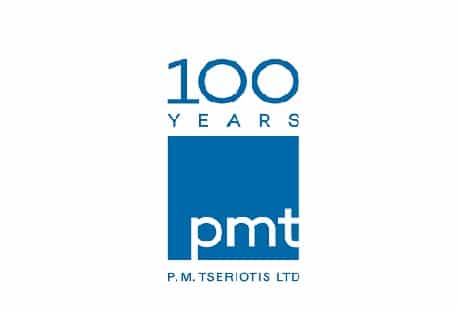 With firm and uncompromised principles, values and vision, P.M Tseriotis as a pioneer and leader of Cypriot entrepreneurship, has evolved into one of the oldest and most recognised business establishments in Cyprus, contributing over time to the development of Cyprus trade and the economy.

P.M Tseriotis’ history dates back to 1916, when its founder Panayiotis Michael Tseriotis became a commission agent for the major European manufacturers LEVER BROTHERS (today’s UNILEVER) and BASF.  The company he founded began to grow rapidly, establishing an impressive island-wide presence with branches in all major cities of Cyprus, its own stock reserves and sales network, evolving eventually into a group of companies with business activities and a leading presence across a number of industries, including the Automotive industry, Consumer Goods, Electrical Goods, Insurance Services, Telecommunications, Information Technology and Third-Party Logistics Services.

1953 was a landmark year for the company as it introduced the legendary VOLKSWAGEN BEETLE to Cyprus and marked the beginning of a long-term business relationship and collaboration with VOLKSWAGEN. Lellos Tseriotis’ leadership of P.M Tseriotis from the early 1960s gave significant impetus to the development of the group’s business activities, with substantial achievements in the years that followed.  P.M. Tseriotis went on to become the authorized representative for international trade giants operating in pioneering at the time fields, including TELEFUNKEN, BRAUN and BAUKNECHT, as well as to secure a landmark deal with Motorola INC in 1984 which led to the import of the first mobile phones in Cyprus and enabled the group’s participation in various telecommunications projects in the country.  Meanwhile in 1976 UNICARS Ltd was incorporated to undertake the company’s activities in the automotive sector, securing in addition to VOLKSWAGEN, the representation of AUDI A.G, and later of SEAT and SKODA.

In 1986, LEVER PMT INDUSTRIES (today’s UNILEVER PMT) was established as a joint venture with UNILEVER for the manufacture of soaps and liquid detergents, taking the long-standing relationship with this international giant to a new level of business cooperation. An equally important landmark was the year 1996 with the establishment of TSERIOTIS CONSUMER GOODS Ltd   to undertake the group’s fast-moving consumer goods business and the inauguration of its modern distribution center. The following year marked the group’s expansion into the Greek market with the establishment of PYLONES HELLAS S.A. In 2001, UNICARS entered the rental car sector, acquiring a significant stake in UNIWHEELS CAR RENTALS Ltd which operates the SIXT RENT-A-CAR franchise in Cyprus.

Over the last decade the group continued its strategic development, with the formation of TRYFON TSERIOTIS Ltd a  joint venture marketing and sales company managing major consumer goods brands, the establishment of DIAPO Ltd a leading third-party logistics services company and the establishment of UNILEVER TSERIOTIS CYPRUS Ltd  another joint venture with UNILEVER, for the sales, marketing and  distribution of UNIVLEVER household, personal care products and ice cream and subsequently  food products thus consolidating all Unilever consumer goods business in Cyprus.  The group also invested in OMNITOUCH CYPRUS Ltd to create the first professional call/contact center in Cyprus for business process outsourcing.

Today, the group companies continue their dynamic growth in the automotive, consumer goods and information technology sectors, thus furthering P.M. Tseriotis’ long-standing contribution to the development of trade and entrepreneurship and to the Cyprus economy as a whole.

In the words of CEO Alexandros Diogenous: “The celebration of 100 successful years in the Cyprus market is a very important landmark for our company.  Over the course of this 100-year journey, a journey of thrills, challenges and opportunities, we have, through our long-term partnerships, developed valuable knowhow and experience, giving us solid foundations for the future. We remain dedicated to the vision, principles and values of our founder, while continuing to successfully adapt to modern-day business needs and demands. With over a century of achievements and dynamic presence in the Cypriot and Greek markets behind us we are confident of an equally successful future. We would like to express our gratitude to our employees and our associates, as well as to our customers who have established us as leaders in our fields of operation.”

Marks & Spencer back on Makarios Ave