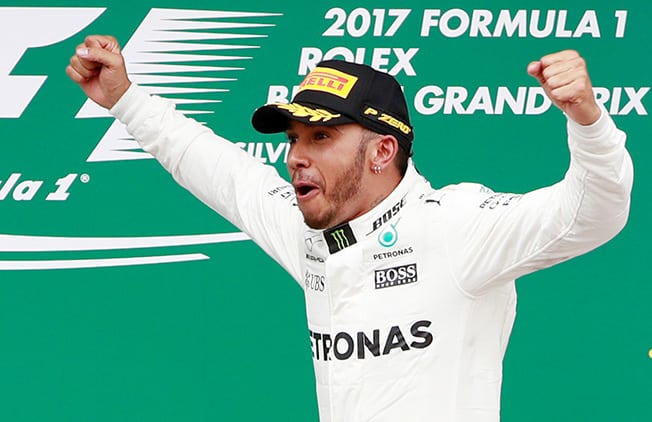 If all goes to plan for Lewis Hamilton in Hungary this weekend, the Mercedes driver will equal one of Michael Schumacher’s all-time records and head into Formula One’s summer break as sole leader of the championship.

A 58th career win for the Briton, and sixth at the circuit outside Budapest, on Sunday would send the triple world champion off on vacation with at least a six-point advantage over Ferrari’s Sebastian Vettel.

Four-time champion Vettel has led since winning the Australian season-opener in March, jointly with Hamilton after China, but the German arrives in Hungary only a point clear after 10 of 20 races.

Hamilton, beaten by now-retired team-mate Nico Rosberg to the 2016 title, but winner in Hungary, has not led the championship on his own since last September but has the momentum after a crushing home victory at Silverstone.

“There’s lots more things that can come up in the future but I think the team’s really energised,” he said after winning from a career 67th pole position, adding that Mercedes had “absorbed all the energy” from the fans at Silverstone.

“So I hope we can take that into the next races.”

Mercedes are 55 points clear of Ferrari in the constructors’ standings but team boss Toto Wolff was wary of suggesting the champions were the favourites again rather than being the ‘underdogs’ he had talked of after Monaco.

“The moment you say that, you go to the next race and are slapped in the face,” the Austrian told reporters.
“It is tricky. Our car is not always easy to set up and we have become much better at doing so in a great team effort.

“But I’d like to see Budapest and how the car works on a low speed, high temperature track and then maybe have a more complete picture.”
With 250 points still to be won in the drivers’ championship, Wolff said it was too early to pick a favourite.

The key, he said, was to extract every inch of performance and minimise mistakes, mindful that Russia and Monaco had not worked out for Hamilton despite every expectation of success.

“With these new regulations it’s not set in stone that it works like it has done in the past,” said Wolff.
“Going into the summer break with a lead is nice. But there was a very famous Austrian skier who was always sector world champion but never won the championship.
“So I’d like to have the lead before the holiday, but it doesn’t mean anything for the world championship.”

For Vettel, Hungary is a chance to rebuild his advantage at a track that also holds good recent memories – in 2015 the Ferrari driver won after Hamilton started on pole.

Finnish team-mate Kimi Raikkonen, for whom Budapest is almost a home race, and compatriot Valtteri Bottas in the Mercedes will also be strong contenders, as will Red Bull’s Max Verstappen and Daniel Ricciardo.

“I love that track and it has always been a good one for me,” said Ricciardo, who won in 2014. “We’ve got lots more grip this year so it’ll be a bit more fun.”