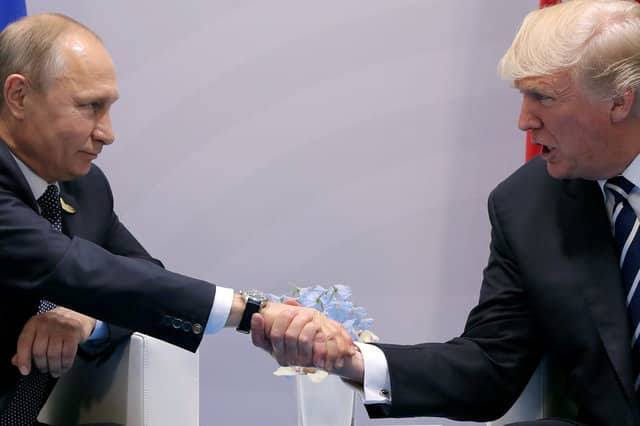 File Photo: US President Donald Trump shakes hands with Russian President Vladimir Putin during the their bilateral meeting at the G20 summit in Hamburg

The honeymoon is over.

Russia’s tit-for-tat decision to expel hundreds of US diplomats and seize two US compounds may be an acknowledgement in Moscow that Trump’s ability to bring better ties is limited, at best, and the start of a new downward spiral in relations.

Russia took the step after the US Senate on Thursday sent a breath-taking signal that it does not trust Trump on Russia by passing a bill that imposes new sanctions on Moscow and ties the president’s hands if he seeks to ease them.

The White House issued a statement on Friday night saying Trump had negotiated changes to the legislation and now intends to sign it.

“(The Russians) have taken Trump’s measure and while they are willing to exploit his goofy fixation on Putin and naive sense you can do deals with someone like Putin … they realize his clownish performance as president makes it really hard for him to deliver on any of the big things that Russia wants,” said Andrew Weiss, a former national security council Russia expert.

At the top of Russia’s wish list is an easing of US sanctions imposed for its annexation of Crimea from Ukraine and its destabilisation of eastern Ukraine, something the Senate action would all but rule out. Another, all but inconceivable, item would be formal US recognition Russia’s claim to Crimea.

“Trump’s performance surely has left nobody in Moscow with the impression he is a guy who can deliver,” said Weiss, now at the Carnegie Endowment for International Peace think tank.

Trump’s desire, often expressed during the 2016 presidential campaign, to improve relations has been hamstrung by findings from US intelligence agencies that Russia interfered to help the Republican against Democrat Hillary Clinton.

A federal law enforcement investigation and multiple US congressional probes looking into the possibility that Trump’s campaign colluded with Russia, have made it harder for Trump to open a new chapter with Putin.

Russia denies it interfered in the election and Trump has said there was no collusion.

The Senate’s 98-2 passage of the sanctions bill, which followed a 419-3 vote in the House of Representatives, forces Trump to take a hard line on Moscow or veto the legislation and infuriate his fellow Republicans.

The huge margins mean Congress could easily override a veto.

Weiss suggested that Trump’s low approval ratings at home, his tendency to alienate Nato allies such as Germany and his inability to pass domestic legislation all contribute to a Russian perception that he is weakening the United States.

“(That) is going to pay dividends for Moscow, so there is no need to turn him away from the course he is already on which is self-destructive and bad for America’s standing internationally. All of that is a huge win for the Kremlin,” Weiss said.

Russia gave the United States until Sept 1 to cut its diplomatic staff in Russia to 455 people, the number of Russian diplomats left in the United States after Washington expelled 35 Russians in December because of the alleged election hacking.

It also said it would seize a Moscow compound used by US diplomats as well as a US diplomatic warehouse.

Some former officials said Russia could take other steps, such as seeking to help Russian-backed forces seize more ground in eastern Ukraine or to try to limit US air operations in Syria, while others said any reaction might be more muted.

Russia could look at imposing economic counter-sanctions against the United States, the former official said, saying he thought that retaliation in Ukraine or Syria was less likely because it was more likely to lead to a US counter response.

Michael McFaul, the US ambassador to Russia from 2012-2014, said he does not think that Russia will escalate tensions with the United States just yet because Trump’s assertions that he wants better relations with Moscow are encouraging Putin to continue seeking some kind of accommodation with the US president.

“I don’t think they are going to walk away from that just yet,” said McFaul. “I believe that Putin still believes there might be something he can do with Trump.”

Five things to watch in the first Trump-Biden debate