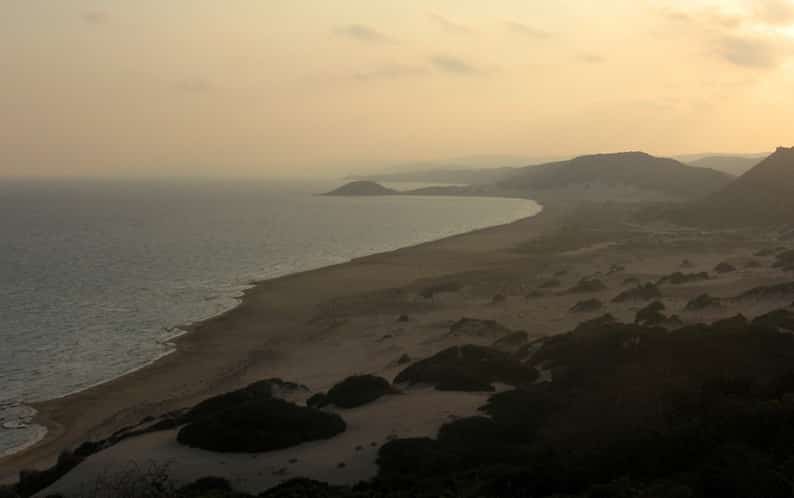 Golden Beach, often described as the most beautiful on the island

For over a year, Turkish Cypriot courts and northern Cyprus’ environment protection office have been working in tandem to close down the wooden chalet sites that beckon tourists to stay overnight by the iconic Golden Beach in the Karpas peninsula.

This culminated last week when the authorities sent in heavy earth moving machinery to knock down the last remaining structures.

Villagers protested the action. Nine were arrested for obstructing the action. Two remain in custody.

Last year, at the onset of the summer season, two sites, Burhan’s Place and Tekko’s, were ordered to close. Just this month, five others were told to cease operations and the chalets have since been dismantled and removed. The Sunday Mail has also learned that at least five more sites will be subject to court proceedings in the autumn.

Turkish Cypriot environmentalists fully support the court decision, claiming the closure and removal of the chalets has been long overdue.

“These chalets were illegal. They should have never been built in this location which is designated as a Natura 2000 special protection area,” Dogan Sahir, head of the Green Action Group, told the Sunday Mail.

“Their removal is thanks to the pressure applied by environmental NGOs and the Office for Protection of the Environment (OPE). And it is good they are gone.”

Not surprisingly, the chalets’ builders disagree. With livelihoods at stake, the local operators say they are devastated at the ruling. They continue to hold hopes that a compromise arrangement can be reached that would permit them to provide accommodation and refreshments on what is widely acknowledged to be the island’s most beautiful beach.

“This is my life, my work. I am 54 years old. What will I do if they take this place from me?” Hasan Korkmaz, the owner of Hasan’s Turtle Place, told the Sunday Mail.

Back in 1993, Korkmaz rented the land from the forestry department. What began as a simple bar gradually expanded over the years. When shut down two weeks ago, it had grown to comprise a restaurant and 18 wooden chalets sheltered by trees, standing on a small hill, facing the dunes and beyond them, the sea.

Korkmaz readily admits that at least six of his bungalows were built without permits. He offered to cooperate provided the authorities would settle for a compromise allowing him to remain on site, with a restaurant and fewer huts. It didn’t happen.

“I have never cut a tree down in my life, I was always protecting this area, cleaning the beach, working with the activists who come here every year to oversee the turtles’ nests,” he maintains. “Who will be doing all the cleaning now?”

Tourists, he claims, are already complaining about the absence of toilets or showers along Golden Beach, since the sanitation facilities provided by the chalet operators have closed along with the sites. “So what are all these people who come to swim in this place supposed to do now? How is such a decision supposed to make the place better?”

The villages at the tip of the panhandle are rife with gossip as to what lies behind the decision to put a halt to the chalet sites. There is much speculation about speculators. In the coffee shops of Rizokarpaso, the buzz is about big businesses and politicians, local and from Turkey, and rumoured plans to profit from developing the last unspoilt part of the north. Some point at fields running down to Golden Beach and whisper that they were bought several years ago by a wealthy businessman from Turkey. Others murmur about rich investors from Israel.

“This is Cyprus,” a villager knowingly tells the Sunday Mail. “Nothing happens here without a reason. Why would they move them unless they have some other plans for this beach? I am sure big money’s involved. Just wait a couple of years. You’ll see.”

Such cynicism may be grist to the coffee shop mill but Yasemin Cobanoglu, the head of Cyprus Turkish Chamber of Environmental Engineers, is adamant that for now at least, Karpasia is safe from predatory development schemes. No big hotel, no tourist resort can be built there. The latest revision to the area’s zoning regulations is sufficient to make even the most hard-nosed, speculative tourism developer think twice, she insists.

This is thanks to the work of the Environment Platform – an amalgam of concerned NGOs, professional unions and other organisations committed to the protection of the nature in the north – which, together with the OPE, spent two months at the beginning of this year reviewing and improving the area’s zoning to ensure full compliance with the Natura 2000 regulation.

The OPE has made sure all these details are included in the official cadastral maps which contain all registered geospatial data.

“Our work hasn’t left any space for anybody to move in and do anything wrong in this area…,” Cobanoglu says.

The maps created by the OPE divide the land in Karpasia into three grades: first grade, fully protected; second, within a buffer zone; and, third, limited development permitted.

Only when the environmental maps agree with the archaeological maps of the same area prepared by the antiquities department can the ‘tourism ministry’, which oversees the work of both institutions, take the decision to allow small-scale construction in the unspoiled landscape area that stretches from the Blue Sea Hotel to the tip of the peninsula.

Fuat Azimli, head of the north’s antiquities department, informed the Sunday Mail that his office had completed mapping of the southern coast of the peninsula, marking its sites in accordance with the same three-grade scheme as the environmentalists. Plans are in place to map the remaining areas to the same standards.

“Only when a piece of land is shown as third grade on both maps can the possibility of building on it be considered and even then we are talking of not much more than 0.5 per cent of the whole area that one owns,” he explains.

In the case of the Golden Beach, this would translate into four locations where the ‘tourism ministry’ plans to build toilets, showers, changing rooms and small buffet or sandwich places for those who decide to visit the area.

“But even then, these constructions are very small, ground floor only, and made of wood, sandstone or bricks. Nor will there be any new roads opened since there are already roads there. As for parking – it will all be inland from the dunes – no cars can go to the beach,” Azimli says.

Azimli notes too that everything to date has been done in cooperation with the EU-hired environmental expert who advises the OPE.

Despite these assurances, the sceptics remain unconvinced. It’s easy to make plans about Karpasia from an office in north Nicosia, they say, but lack of finances and staffing mean the central authorities face huge difficulties when it comes to overseeing project activities and zoning compliance in so vast an area located more than two hours’ drive from the capital.

“Even as we speak, there are people camping in tents on the turtle beaches, where camping is strictly forbidden,” one close observer of the local scene comments.

“There are no local environmental police. Nor is there a regular beach cleaning detail. The environmental office has no money to employ people to oversee the Golden Beach and make sure that things are OK there.”

“Yes, it is true, we need to work on developing a further plan how to protect the area, how to manage it and how to further defend it.

We need to create a better control system and find better solutions on how to ensure and maintain a clean and healthy environment,” he says.

“Removal of the chalets is the first step in the right direction – ensuring a golden future for Golden Beach and its environs.”

Meanwhile, two of the operators have been offered alternative plots of land for their chalets, outside of the Natura 2000 site. The Sunday Mail has been told that others will be made similar offers.