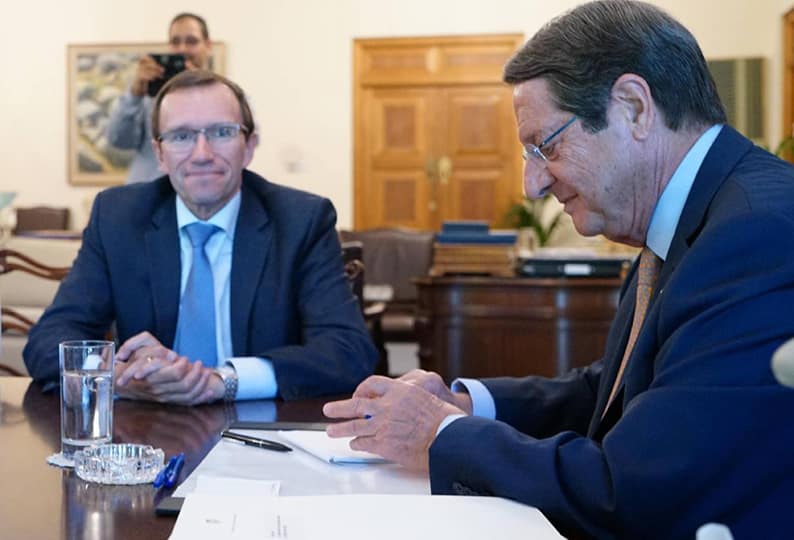 Despite a week of blunders, big and small, in the fight to handle the fallout from the failed Conference on Cyprus at Crans-Montana earlier this month, the government is gearing up for a return to the process with the framework drafted by United Nations’ Secretary-General Antonio Guterres on the table, a government source has told the Sunday Mail.

According to the source, the framework is deemed an important gain for the Greek Cypriot side in the talks because it clearly and unequivocally favours its views on security and guarantees, while giving away only “equitability” for Turkish nationals relative to Greeks on the island. The Greek Cypriot side interprets this as a 4:1 ratio but the Turkish side takes the figures at face value, arguing for numerical equation.

The week started with a very public row between UN special adviser Espen Barth Eide and President Nicos Anastasiades over whether an opportunity was missed at Crans-Montana and continued with a late and tepid response to the announcement by Turkish Cypriot leader Mustafa Akinci that the Turkish army will withdraw from its military facilities in Maronite villages in the north, so that lawful residents can return. The week ended with a UN Security Council resolution that may have answered the question of whether the three-year push for a solution ended with the Crans-Montana dinner on July 7.

“[The Security Council] calls upon the two leaders to […] put their efforts behind further work on reaching convergences on the core issues […] improve the public atmosphere for negotiation to secure a settlement, [and] increase the participation of civil society in the process as appropriate,” the resolution said.

The council also expressed “full support” for keeping the secretary-general’s “good offices at the disposal of the parties”, and reaffirmed resolution 1251, which laid down the UN’s parameters for the solution of the Cyprus problem.

“It’s obvious,” the government source said on whether the UN text translates to “it’s not over yet”.

Asked whether Anastasiades’ statement on Wednesday, in which he declared his readiness to return to the table “if the Turkish government accepts Mr Eide’s claims as true”, marked a departure from the conditions he laid out on return from Crans-Montana, the government spokesman Nicos Christodoulides told the Sunday Mail that the two “amount to the same thing”.

“If Turkey announces that it is ready to drop its demands for guarantees and intervention rights, we are ready to go back to the table,” he said.

In this context, acceptance of the Guterres framework – which defines the abolition of guarantees and intervention rights as one of the elements of an agreed solution – would be an equivalent move by Turkey.

Both Turkey’s foreign ministry and Akinci have remained conspicuously silent on the claims Eide made in various interviews – that Turkey was ready to move back from its position that it would accept a review of the guarantee and intervention right questions fifteen years into an agreed solution.

Meanwhile, in the midst of the chaotic hours between the decision to make public the Greek Cypriot side’s ‘minutes’ from the Crans-Montana ill-fated dinner and the one to share them with various international stakeholders only, Anastasiades’ announcement of a National Council session on Tuesday went unnoticed.

The body last convened on return from Crans-Montana in a two-day session, of which only the first involved discussion – the second was dedicated to Greek Foreign Minister Nicos Kotzias, who sat in and shared his account.

Tuesday’s session, the government said, is simply a continuation of those meetings, addressing the need to discuss the unfolding situation post-Switzerland.

But the Sunday Mail understands that the session is being called in a bid to foster support for attempting to restart the peace talks and – crucially – find ways to ensure that Guterres’ framework remains the basis for discussion. Opposition parties have voiced disagreement not only with the “equitability” clause but also with the prospect of accepting different priority rights to property (lawful owner versus user) in each constituent state of reunified Cyprus.

“We’re past the reflection period – we’re now at the stage of making proposals,” Christodoulides hinted on Friday, referring to Guterres’ urging for the sides to take some time and reflect on the way forward after Crans-Montana.

A push for the quick resumption of talks on the substance would help the government avoid a protracted discussion of its response to the Turkish Cypriots’ announcement that Maronites will be allowed to return to their villages in the north, with the fenced-off town of Varosha rumoured to follow soon.

The announcement prompted a response by the government late on Thursday, attacking the Turkish Cypriot side for attempting to entrench the status quo and strengthen its arguments for keeping Maronite villages under Turkish Cypriot administration, but gave no indication of its view or guidance to those affected.

“The government can’t tell people what to do in such a situation,” the government source told the Sunday Mail.

“It’s their properties, how could we tell them not to return to them, even if we thought they shouldn’t? When someone resorts to the European Court of Human Rights with a claim for restitution, would they have to ask the government? Or, if they turn to the Immovable Property Commission, would they require permission from the government?”

The problem for these people, the Mail was told, is the restrictions they are going to face.

“For instance, if the original owner has died some time post-1974, the heirs aren’t recognised as the rightful owners – instead, the land is passed to the regime in the north,” the source said.

“These are the kinds of problems they are going to face, if they are not the original owners.”

But the Maronites won’t be faced with any real dilemmas for some time – the Turkish-army occupied villages are apparently not connected to the electricity grid or water supply – which is why the Cyprus government is focusing on shaping shorter-term developments.