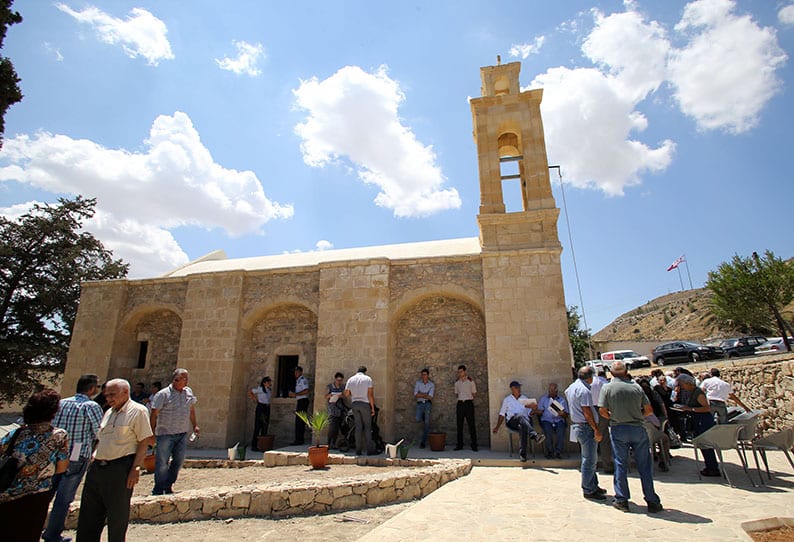 Ayia Marina, one of the Maronite villages to be opened up. The move could be part of the Plan B the Turks spoke about in the wake of the Crans-Montana failure

RESPONDING to the decision by the Turkish side to allow Maronites to return to their villages in the north, government spokesman Nicos Christodoulides said this was part of Turkey’s plan to prevent these villages from being placed under Greek Cypriot administration after a solution.

But what solution was Christodoulides actually talking about? Is a solution that we do not know about imminent? Was the collapse of the talks in Switzerland and the unrelenting blame game that is raging just a bit of theatre ahead of a solution?

Perhaps he has instructions from the president to keep talking about the ‘solution’ because it suits the re-election drive, but any talk of a solution nowadays sounds ironic or an attempt at satire. It may be that talk of a ‘solution’ is such an integral part of the Cyprus problem discourse, politicians cannot stop referring to it when speaking publicly, even if it makes them sound rather ridiculous. Then again, as our politicians have been paying lip service to a solution for decades, without necessarily wanting it, perhaps they cannot just stop overnight.

The reality however is that the last chance of a solution envisaging re-unification was buried in Crans Montana. The declarations and actions of both sides since then indicate they are determined to keep it in the ground.

Immediately after the collapse, the Turkish government spoke of a Plan B and pointed out that a solution had to be found outside the UN framework give the repeated failure to find one within it. In an ironic twist, the Cyprus government and party leadership have been supporting Turkey’s argument with their merciless, concerted attack on the UN special advisor and by implication on the UN secretary-general who has full confidence in him and has kept him in the job.

Espen Barth Eide returns to say his goodbyes this week with a farewell reception to be held on Thursday. It would appear the UN has also decided this was the end of the road, given that President Anastasiades has fully adopted the Nikos Kotzias doctrine of setting zero troops and zero guarantees as a condition for returning to a conference. Eide, who has been labelled a liar by Anastasiades, has repeatedly said that Turkey would give up guarantees and the right to intervention only as part of a comprehensive agreement, which excludes the possibility of a conference. So where would this solution that Anastasiades and Christodoulides are still talking about come from?

The decision to open the four Maronite villages for the return of their inhabitants – taken by the Turkish Cypriot leadership with the commander of the occupation forces – could be a sign of what is to come, an illustration of the Plan B the Turks spoke about in the wake of the Crans-Montana failure. On Thursday, Turkish paper Milliyet reported there were also plans to re-open Varosha and to invite the city’s Greek Cypriot inhabitants to return to their homes (what is left of them) under Turkish Cypriot administration. Turkish Cypriot ‘foreign minister’ Tahsin Ertugluroglu denied there was such a plan at present but the Anastasiades government took the report seriously.

Foreign minister Ioannis Kasoulides said that a legal document, which would explain that the opening of Varosha was tantamount to expanding the occupation, was being prepared. The UN avoided taking a stand with spokesman Farhan Haq saying this would be a welcome confidence-building measure if both sides agreed to it. But if it were a unilateral measure, what argument could our government use from stopping Greek Cypriots returning to their properties or selling them? Could it tell them, you may have been waiting 43 years to return to your properties, but you should keep waiting until there is a solution, the chances of which are zero?

It is becoming very apparent that Anastasiades’ view that things would remain the same after a collapse of the peace process was a gross miscalculation. He ignored Turkey’s warnings that the conference was the last chance for a settlement and is now faced with an unravelling situation he has very little control over. Apart from the issue of Varosha, there is also the pending review of Unficyp’s presence, which the UN Security Council requested in last Thursday’s renewal of the peacekeeping force’s mandate and will be ready before the end of the year. What will Anastasiades do if a full withdrawal is recommended, given that Unficyp’s presence does not promote a political solution? There is also the issue of the drilling. For now, Total is drilling undisturbed, but who can predict how Turkey will react if a big discovery is made?

We are entering a period of great uncertainty, which Anastasiades completely failed to foresee. It is most unlikely to be controlled by the preparation of legal documents or hollow talk about the solution. We gave up on that, by accident or design, in Crans-Montana.