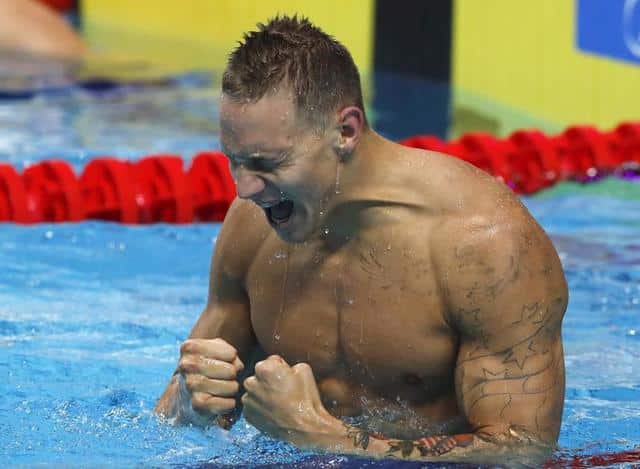 Caeleb Dressel of the United States heralded a new era in world swimming when he equalled the great Michael Phelps’s feat of seven golds at a single world championships as the 17th edition closed on Sunday.

The 20-year-old Dressel underlined his credentials as the world’s fastest starter in breathtaking fashion at the Duna Arena when he broke away on the butterfly leg to give the U.S. gold in the men’s 4×100 metres medley relay.

Dressel had already won three individual golds and three relay titles in Budapest and Sunday’s addition allowed him to match his compatriot Phelps’s tally from the 2007 championships in Melbourne.

He also helped the U.S. to record their best-ever world championship haul, with 38 medals.

However the enormity of the Florida student’s achievements had yet to fully sink in.

“I’ve never had it happen so I don’t really know what to say,” he told reporters. “I’m going to take a little break in Europe, go to Poland and Scotland and just enjoy myself.

“It was probably the most fun I’ve had in eight days. It was an absolute blast getting to do what I love.”

Team mate Lilly King had kickstarted the evening in blistering style with a world-record time of 29.40 seconds in the women’s 50m breaststroke.

The atmosphere rose when Hungary’s Katinka Hosszu glided to gold in the women’s 400m individual medley, adding to her 200m medley title.

The American set a championship record of four minutes 5.90 seconds to become the third-fastest performer behind Phelps and Ryan Lochte.

“Michael and Ryan are my idols so just to be behind them is cool for me to think about,” Kalisz told reporters.

The 23-year-old paced herself perfectly to hold off Ranomi Kromowidjojo of the Netherlands in 23.69 seconds. Simone Manuel of the U.S. won bronze.

Sjostrom said: “It was a really good first 25m but the finish was really bad. But it doesn’t matter what time it is, the only thing that mattered was that gold.”

Camille Lacourt of France delivered the perfect hors d’oeuvre for his new life as a Paris restaurant owner by blazing his way to a hat-trick of men’s 50m backstroke world golds.

Lacourt, 32, bowed out of the sport in style as his 24.35 seconds saw off Japan’s Junya Koga and Matt Grevers of the U.S. into the minor medals.

King and Manuel then helped the U.S. to set a world record on the way to women’s 4x100m medley relay gold.

That paved the way for the U.S. relay men’s golden finale, with Britain finishing in silver 1.04 seconds behind.

In their dominating performance at the championships, the U.S. claimed six of the 11 world records set in Budapest. Katie Ledecky, who did not swim on Sunday, finished as the leading female swimmer with her five gold medals and one silver. Manuel collected five golds and a bronze.

We should no longer ignore the economic benefits of a solution