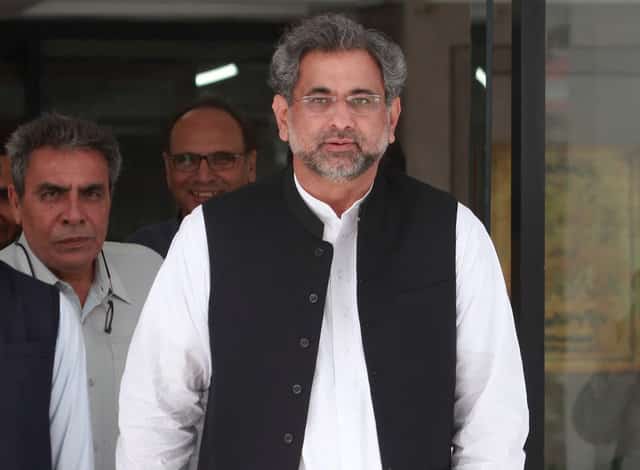 Pakistani lawmakers on Tuesday elected former petroleum minister Shahid Khaqan Abbasi, an ally of ousted leader Nawaz Sharif, to replace him and the new premier immediately sought to project an image of stability.

Lawmakers of the ruling Pakistan Muslim League (Nawaz) party banged on benches and chanted “Lion, lion Nawaz Sharif” after the vote, standing defiant in the wake of the Supreme Court’s decision to cut short his third stint in power.

A quick transition may ease fears that the nuclear-armed nation will be plunged into another bout of political turmoil, which could erode economic and security gains since the last poll in 2013.

Sharif resigned on Friday after the Supreme Court disqualified him for not declaring a source of income – which the three-time premier disputes receiving. He nominated staunch ally Abbasi as interim leader until his brother, Shahbaz, becomes eligible to take over, probably within two months.

Abbasi was confirmed with 221 votes in the 342-seat National Assembly as the PML-N used its hefty majority to push through his appointment. PML-N officials hugged each other and congratulated Abbasi even before the result was announced.

“Within four days the process of democracy is back on track,” Abbasi told lawmakers after being voted in. “Above all, I’m thankful to Muhammad Nawaz Sharif, the people’s prime minister.”

PML-N officials have privately spoken of plans for Sharif to wield huge influence in the party from behind the scenes.

“The prime objective is to give Pakistan stability,” said Rana Muhammad Afzal Khan, a PML-N lawmaker in the national assembly. “As a responsible party we have to take Pakistan ahead.”

But the plan to eventually install Shahbaz has also sparked anger among supporters of opposition leader Imran Khan, who has criticised another bout of dynastic politics, a trend with a long history in Pakistan and elsewhere in South Asia.

Khan, who agitated with street protests until the Supreme Court took up a corruption case against Sharif, has called the family a “monarchy” and accused it of trying to turn the country into a personal fiefdom.

Shahbaz, now chief minister of eastern Punjab province that is home to more than half of Pakistan’s 190 million people, will have to resign and fight a parliamentary by-election before he can take over as prime minister.

Aides say he is likely to favour a new personal style of government, while probably continuing his brother’s focus on huge infrastructure projects and policies favouring business.

Western-educated Abbasi, who started his career as a businessman, has spent most of his political life by Sharif’s side. He was jailed after Pakistan’s powerful military staged a coup in 1999 to topple a previous Sharif government.

As minister of petroleum and natural resources in Sharif’s last cabinet, he championed a push to build liquefied natural gas (LNG) infrastructure and alleviate energy shortages.

The effort has attracted foreign companies, who now see Pakistan as one of the world’s fastest-growing markets. Growth will increase fivefold, Abbasi told Reuters last month.

The opposition has also accused Abbasi of corruption over the bidding for an LNG deal in southern Karachi, citing a National Accountability Bureau (NAB) inquiry case filed in 2015 that alleges procurement irregularities.

The NAB case has made little progress and Abbasi has denied wrongdoing, with PML-N allies saying the opposition wants to detract from the success of the LNG effort.

Besides ordering Sharif’s removal, the Supreme Court also ordered a criminal investigation into him and his family, as well as Finance Minister Ishaq Dar.

Herodotou knew she was a wanted person since 2011, court says (Update 2)