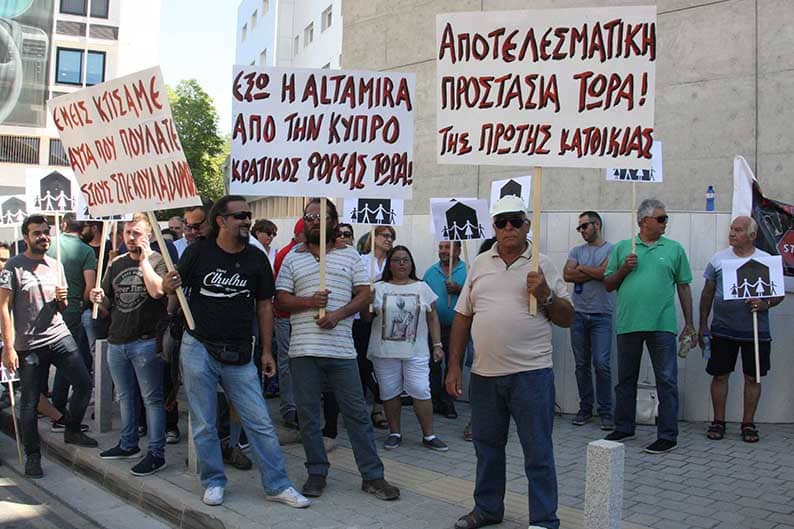 The Cyprus Cooperative Bank’s decision to enter an agreement with Spain’s Altamira on the management of its non-performing loans, roughly 60 per cent of its portfolio, triggered a protest on Wednesday outside its head office which attracted dozens of protestors.

“The co-op and the other banks need to help people to repay their loans with viable loan restructurings,” said Evgenia Moyseos, a spokesperson of the Movement Against Foreclosures in a telephone interview, hours after the protest gathering.

“Is Altamira going to do any good in the case of someone who’s and crisis stricken and unemployed since 2010 by disposing his home,” she asked.

The state-owned co-op, which the government bailed out with almost €1.7bn in taxpayer’s money, announced on July 17 the agreement with Altamira Asset Management SS, owned by Spain’s Santander Bank, the Abu Dhabi Investment Authority, Canada Pension Plan Investment Board and the New York-based Apollo Global Management. Under the terms of the agreement, the two parties will set up a new unit in which Altamira will have a 51 per cent stake and the co-op 49 per cent.

The Cyprus Cooperative Bank, as the former Cooperative Central Bank is currently known, will outsource to the new unit the management of its delinquent portfolio of €7.2bn and real property in its possession, currently worth €0.4bn.

Protesters entered the premises of the co-op and a delegation held a 30-minute meeting with the bank’s chief executive officer Nicholas Hadjiyiannis to whom they submitted a list with their positions, the Cyprus News Agency (CNA) reported.

Hadjiyiannis pledged to continue the dialogue with the Movement Against Foreclosures adding that the Cyprus Cooperative Bank realises “sensitivities in this area which is also of our concern”.

The demonstration also attracted populist politicians known for their opposition to foreclosures, such as Stavros Malas, the candidate of communist Akel in next year’s and the 2013 presidential elections, Kostis Efstathiou, a deputy of Edek, Anna Theologou, a member of the parliament in the Citizens’ Alliance faction and deputy George Perdikis, the leader of the Green party, according to CNA.

Other organisations such as the communist trade union PEO, Povek, the umbrella organisation representing self-employed and small businesses, Akel’s women’s division Pogo, and the communist youth, Edon also took part.
According to CNA, Hadjiyiannis said that he is confident that the co-op, which is currently working on a Cyprus Stock Exchange listing in an attempt to attract private equity with share issues, having exhausted every possibility of receiving state-aid, “with the plan we made, we can give solutions and manage this big problem”.

“We are part of the system and know too well what is going on and our aim is not to foreclose but (to offer) solutions,” he was cited as saying.

Malas, the Akel presidential candidate, said that following the 2013 banking crisis, in which depositors at Bank of Cyprus saw almost half of their uninsured deposits turned into equity and those at Cyprus Popular Bank lost all their deposits in excess of €100,000, some Cypriot banks have become intermediary companies.

“The state should intervene with a socially sensitive policy to support those in need,” he said according to CNA. “We have to protect the primary home and small and medium size enterprises within a context of healthy corporate governance, that takes into account social cohesion and helps these companies out of this difficult position”.

In a statement, the Movement Against Foreclosures said that it believes that Altamira’s partnership with the co-op has “discredited the latter in the eyes of the Cypriot people”.

The movement also asked the co-op to cancel and also publish the agreement with Altamira, and provide a public commitment that it will protect the primary home in the cases of borrowers who are recipients of the guaranteed minimum income and low pensions, long-term unemployed, single parents.