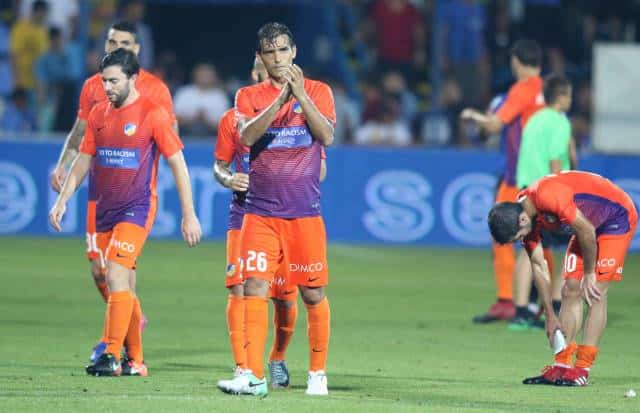 Cyprus champions Apoel have been poor in Champions League qualifying so far this summer, with last week’s 1-0 defeat at the hands of Viitorul Constanta in Romania costing coach Mario Been his job after just three games in charge

Another huge European night awaits the GSP Stadium on Wednesday, with Apoel needing to overturn a 1-0 deficit from the first leg of their Champions League third qualifying round clash against FC Viitorul Constanta, after a dramatic week in the Cypriot camp.

Last week’s disappointing defeat in Romania sparked drastic action from the board, who sacked manager Mario Been after just 63 days in charge.

The club had been underwhelmed by the impression the Dutchman had given in his first three matches and felt that replacing him before the second leg would boost their chances of reaching the playoff round.

Been’s replacement is someone well-known to the Apoel faithful, and was incidentally the last boss at Archangelos to have survived more than one campaign. Greek manager Giorgos Donis took Apoel to the Champions League groups in the 2014-15 season, and the club is hoping he can inspire the team to do the same this time around.

Apoel press officer Nektarios Petevinos however, was quick to warn against placing overly high expectations on the new manager, saying “Donis is no messiah” but does believe there will be a noticeable change.

“We cannot expect to see a totally different Apoel, but we do expect an improvement”.

He added: “Our new manager has his view on the squad. He saw the previous games and through the training sessions is trying to improve the team. The tactical philosophy of the team will change. We will see a more organised Apoel, defensively and offensively”.

Someone who Donis may not be able to call upon is striker Mickael Pote, who faces a race against time to be ready for the match but everyone else, apart from long-term absentee Nick Ioannou, trained fully ahead of the big game.

There were hardly any positives for Apoel in Romania last week, but one was the fact that George Tucudean, the Viitorul striker who caused a lot of problems, picked up a second yellow card in the closing stages of the match, meaning he is suspended for the second leg.

The Romanian side will also be entering the game on the back of a disappointing result, as they fell to a 1-0 defeat at home to Dinamo Bucharest over the weekend. That makes it two defeats in as many games for the reigning champions at the start of the Romanian championship.

Despite the disappointment of the first leg, the Apoel faithful are expected to turn up in their droves to push their side to victory, with over 13,000 tickets being sold by Tuesday lunchtime for the 8 pm kick-off.

Apoel will not be the only Cypriot side in action on Wednesday. AEL host Austria Wien at the Antonis Papadopoulos stadium in the second leg of their Europa League third qualifying round tie, following a commendable 0-0 draw in Vienna last week.

AEL won their two previous home matches in the Europa League this campaign, against St. Joseph’s (4-0) and Progres Niedercorn (2-1), and any victory on Wednesday will see them through. However, the 0-0 scoreline in the first leg means that any score draw will put the Austrians through on away goals.

Like Apoel, AEL are expecting a huge crowd to help them through to the playoff round, with an extra effort being made by the club to encourage the fans to make the drive to Larnaca to spur on the players. The match kicks off at 7pm local time.

Assets of state officials set to be published soon

Kids become pirates for a day