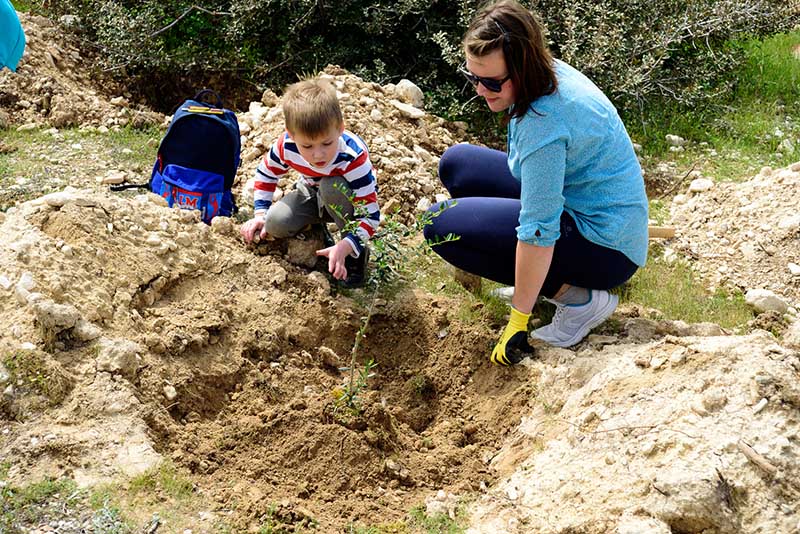 Once, Cyprus was green. 50 per cent of the country was covered in forest, and it was known as The Green Island. Today, less than half of that remains. Climate change (soil quality deterioration, rising temperatures, reduced rainfall) and reckless human activities (mismanagement of water resources, poor agricultural and farming practices and frequent fires) have put paid to our claim to be the emerald jewel in the Mediterranean crown: today, we’re a country at risk of desertification.

It’s a process that’s been going on far, far longer than you might think. In the third century BC, Eratosthenes (the Chief Librarian at the Great Library of Alexandria) wrote of the dense Cyprus forests disappearing under the axes of those eager to turn a profit in the mining and shipbuilding industries. Later, various 19th-century Victorian travellers described the island’s arboreal landscapes as “once famous in antiquity, but severely damaged by misuse over the centuries.” And, factoring in the devastating forest fires of the last hundred years (those in 1924, 1956 and 1974, destroyed almost 400 square kilometres of forest), today we’re left with an island that is – according to a report from the Department of the Environment – “likely to see 70.4 per cent of the land becoming very sensitive to desertification by 2050.”

Okay, there are fewer trees around nowadays. So what? Well, not only do trees slow down climate change (acting as a sort of planetary insulation blanket), they’re crucial to preventing soil erosion and degradation. And they’re also, says Veronika Gopenko, co-founder of GreenCyprusCom, the one thing that’s really important when it comes to the future of our children…

“One tree produces enough oxygen for 10 people, while speeding up the process of oxygen and carbon dioxide exchange and helping to maintain temperature levels. Plus, forests are beautiful, relaxing places – good for the soul and a great provider of shade,” she adds with a smile. Veronika and GreenCyprusCom, a non-profit organisation, aim to re-green the island. Working in close collaboration with the Department of Forestry, the volunteer network has already planted over 1,300 trees and has a number of environmental projects in the works…

“Our main goal is reforestation,” Veronika explains, “and our mission is to plant more than 20,000 trees – a number which, although ambitious, is realisable. The idea behind GreenCyprusCom came from German Lillevyali, a Russian businessman with a real love of Cyprus,” Veronika continues. “His idea was to preserve and promote the natural beauty of the country; our generation has taken a lot from nature and so we feel we should give back – planting trees is a good way to do this. And through this initiative, we’re also hoping to raise environmental awareness – especially amongst the younger generations who are, after all, the future of our island.”

Having registered the charity late in 2016, the network launched its first event at the start of February, and since then has completed a number of tree-planting events. “Back in February,” Veronika says, “we invited our friends and families to help us with the first of our events, a tree planting in the Petra tou Romiou region.” Guided by the expert hand of the Forestry Department, GreenCyprusCom gathered sponsorship (from, in the main, CyprusLand and the KibrisInform Group of companies) and bought 100 saplings from recommended nurseries at a cost of between two and seven euros per tree. “We set a date, let people know what we were planning to do, and hoped for the best,” Veronika reveals…

“Over 30 volunteers showed up – far more than we’d hoped! People of all ages and nationalities spent their morning digging holes, unwrapping the trees and carefully setting them into the soil, and all 100 trees were planted that day!” Flushed with the success of their first undertaking, the charity organised a further two plantings within the next month: the first at the end of February (which saw 40 students from the Heritage School plant 200 trees while learning about environmental sustainability), the other at the start of March.

“Our last event was actually almost a disaster!” Veronika laughs. “We’d planned it for March 11, but there was a huge storm that day, and in the same way you can’t plant trees during the summer season, you can’t plant in the rain! We postponed the planting for a week, and just hoped people would show up!” But show up they did: 250 volunteers coming together to plant 1,000 pistachio bushes, carob trees, wild olives and cypresses, in what Veronika describes as “a wonderful event, full of enthusiasm!”

While the organisation has a number of other plans in the works (including beach clean ups and an ‘Adopt A Tree’ scheme, set to take off in the autumn), and hopes to get the go-ahead for plantings in the fire-devastated Solea Valley later in the year, for the moment, arboreal maintenance is taking precedence.

“Watering the trees is a very big undertaking in this climate,” Veronika explains. “I’m from Russia; there we just plant trees and go! Here the process is a lot more complicated. Planting the tree takes about 10 minutes: preparing the soil, pruning, putting the soil back. But taking care of the tree is a hard job – you’re responsible for this life you’ve started, and that includes the watering.” With the aid of the Forestry Department, GreenCyprusCom has emplaced a system of pipe irrigation, which uses recycled water from local industries, and hopes to be able to maintain a survival rate of 60 per cent (the average figure for tree plantings in a Mediterranean climate) in the coming years.

“These trees are a symbol of continuous life,” Veronika concludes. “Once, Cyprus was very green; we’re working on bringing this back. We’re not a big island, we’re pretty small, and we have only a certain amount of resources. But we work with what we have, and we believe it’s the responsibility of this generation, here and now, to ensure we sustain, maintain and improve our island for our children.”

For more information on GreenCyprusCom and the Adopt A Tree programme, call 96 066781, email [email protected] or visit the Facebook page ‘Green Cyprus’ or the website http://green-cyprus.com

Plant of the week: Plant extract can reduce cholesterol