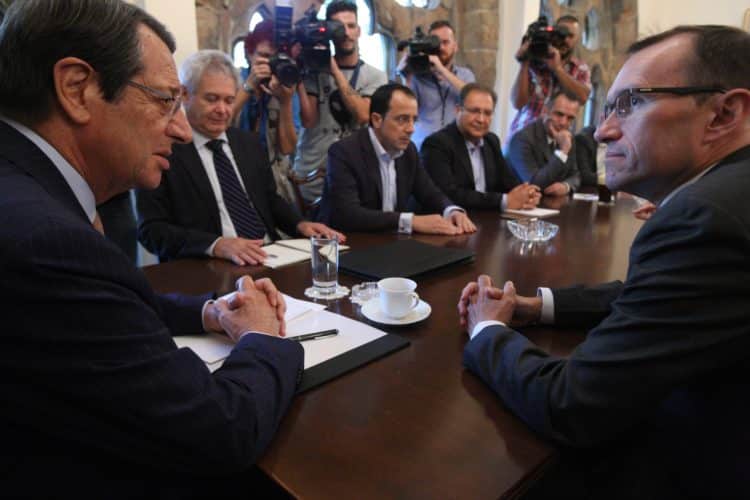 Reviving the reunification procedure can only be done by the two sides on the island and will not be done by the United Nations, UNSG special adviser Espen Barth Eide said on Thursday.

Speaking after a farewell meeting with President Nicos Anastasiades, Eide said the procedure that started in Switzerland had finished in Switzerland but it did not mean it could not be revived.

“What I am saying, and I think the leaders agree with – I am not speaking on their behalf but it is my sense that it is a shared understanding – that it will not be resurrected by the UN. We are not planning an initiative. I think that`s natural. We had Crans-Montana.  The resurrection will have to happen from here in harmony and through agreement by the sides. and if they agree the SG is there,” he said.

“The decision must be made here and I think the international community now needs to be convinced that there is a real intent to try again,” he added.

“I cannot with confidence say that I think it is just around the corner. We are here to help. We will always be available and the SG has said that he remains available if the sides want it.”

Talks in Crans Montana collapsed earlier this month over disagreements on security and guarantees. Both sides have since blamed each other for the collapse.

The Greek Cypriots have also censured Eide, accusing him of being biased and a liar.

“I think we achieved a lot in this process and I think Mr. Anastasiades and Mr. Akinci, with our help, and with all the international support and support from people here in Cyprus, managed to bring the process further than any pair of leaders before them,” he said.

However, at the same moment the fact that no deal had been achieved could not be hidden, Eide added.

He said there were large and complicated issues but the recent phase left a better understanding of where an agreement could be found “if ever there will be a new attempt and if someone would try again.”

Eide said he and Anastasiades had a good, friendly conversation about their shared experience in this process.

He tweeted later: “Today, I had my last official mtgs w/ @AnastasiadesCY & @MustafaAkinci_1. Thanking them for close cooperation, wishing them both the best.”

The UN envoy said what was left from the talks was at least  a better understanding of where an agreement could be found, if ever there will be a new attempt and if somebody would try again.

He said the UN would record everything and that he would make sure it as in the report he would submit. “We will try to record all that was achieved and also where we think we could have been going so that the work has not been lost,” the diplomat said.
Eide refrained from responding to a question about the Turkish stance during the last dinner in Crans-Montana, noting that things had been said and he does not think it would contribute to anything to continue that line.

He said that his focus now is to finalise his job here with the reports to the SC, noting that they will make a public report and their own internal lesson learned.
Asked about his message for the Cypriots, he said that Cyprus was a great with the potential of being a united country.

He referring to his cooperation with the leaders, the negotiators and their teams, saying they all had developed a high degree of respect for each other.

“I think I have learned to understand at least some of the particular sensitivities that comes with being a Cypriot, Turkish Cypriot or Greek Cypriot, and things that might easy from the outside are less easy when you see it from the inside. And I say that with empathy and understanding”, he said.

Eide also said that when Cypriots discuss the future it is relatively easy to discuss future arrangements, when they discuss the present it becomes a little bit more difficult and when they try to agree on the past it is absolutely impossible.
He also said that everyone should be critical of their own efforts and that “one thing we could collectively collect upon, that means the UN and the sides and everybody involved, is that maybe this process was too secretive”.

Eide said that given that it took quite some time, maybe it would be better with hindsight to have had more transparency and some more sharing of what was actually happening.

The fact that even though a lot of progress was made, they were unable to say what that progress was, which made people, understandably, suspicious, he explained. It also made it easier for those people who have the conviction that there should not be a solution to tear it apart and take it down, he added.

Eide said that you either have a short, quick and effective secret process or you have a long and more transparent process.
The Norwegian diplomat said that some more involvement by the broader society would have been helpful, noting that civil society came on the stage relatively late.

He noted that he knows many-many people on the economic side, business leaders, trade union leaders who were determined to help for a settlement but who didn`t want to raise their voices.
He also said more work could have been done to prepare the people for the reality that a solution will not be absolutely perfect from either side. “A solution entails an element of compromise. You have to accommodate and meet each other,” he said.
Following the morning meeting, deputy government spokesman Victoras Papadopoulos said Anastasiades believed Eide and the UN would prepare a report reflecting what happened in the talks.

He said the president held an excellent meeting with Eide during which they discussed the prospects for the future.

Anastasiades thanked the UN envoy for all his efforts for a solution of the Cyprus problem.

Asked if the president still had confidence in Eide in view of the report he will draft, Papadopoulos said the President believed that the report of the UNSG’s special adviser would depict the reality and what happened in Crans Montana.

The Greek Cypriot side says the talks failed to produce results due to Turkey’s persistence in maintaining intervention rights in Cyprus after the solution.