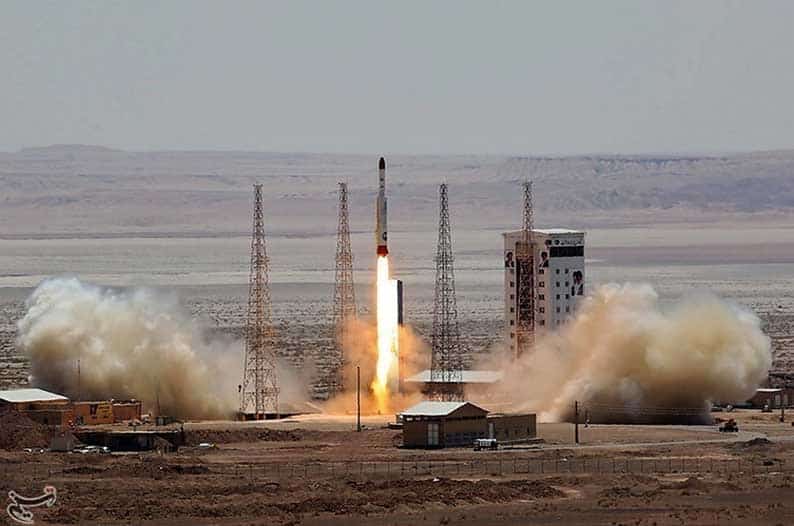 Simorgh rocket is launched and tested at the Imam Khomeini Space Centre, Iran

Tensions between Iran and the United States are escalating rapidly. Over the weekend, Iranian and US navy warships engaged in yet another round of shadow boxing in Persian Gulf. Last week Congress slapped additional sanctions on individuals and companies associated with Iran’s ballistic missile program and support for terrorism. Iran, in response, test-fired a rocket into space. Forces backed by Washington and Tehran continue to wage proxy wars across the Middle East from Syria to Yemen.

There is, however, one area where pressure has eased between Iran and the West: Tehran’s nuclear program. To date, the International Atomic Energy Agency (IAEA) has reported seven times that Iran has met its commitments under the deal. America’s partners in the negotiation, the EU, Russia and China, have affirmed Iranian compliance as well. So has Trump’s own administration – twice.

But Trump wants to abandon the deal – regardless of whether Iran continues observing the terms of the Joint Comprehensive Plan of Action (JCPOA). He was reluctant to certify Iran’s compliance with the nuclear deal, and the New York Times reported last week that he told his advisers that he would like to find a reason to scuttle the multilateral agreement.

If Trump pursues this course, his actions all but assure an increase in hostilities with Tehran. It could force the Iranian leadership to believe that nuclear weapons are essential for their survival. This is precisely the situation that the United States faces presently with North Korea, which virtually holds East Asia hostage because of its nuclear arsenal.

The similarities between Trump’s 2017 response to the Barack Obama-led Iran accord and George W. Bush’s reaction in 2001 to the Agreed Framework with North Korea that Bill Clinton signed are striking.

Then as now, a neophyte president was determined to chart a new course in foreign policy to distinguish himself from his predecessor. Then as now, Bush launched a comprehensive policy review of the North Korea dossier.

By 2005, realising that Pyongyang was closer to producing a nuclear weapon, Bush sought to negotiate a more comprehensive disarmament agreement – but it was too late. Perhaps seeing what happened to Saddam Hussein’s Iraq, the leadership in North Korea was determined to acquire nuclear weapons as an insurance policy for its survival. One year later, they tested their first weapon.

Unlike North Korea in 2001, there is little doubt that Iran is complying with the terms of the accord to devote its nuclear programme to peaceful purposes in return for the lifting of nuclear-related sanctions. The JCPOA mandates a stringent inspection regime by the International Atomic Energy Agency to ensure that Iran cannot engage in activities that contribute to the design and development of a nuclear explosive device, and forbids Iran from pursuing nuclear weapons in perpetuity. While no arms control agreement is without flaws, the question that Trump should be asking is: What are the alternatives?

Without the nuclear deal, Washington and its allies would have less access to and fewer constraints on Tehran’s nuclear program. So long as Iran remains in compliance with its JCPOA commitments, any steps by the US to undermine its own obligations under the deal will be deemed as “going rogue” by the international community. This would erode the ability of future U.S. administrations to negotiate credibly with friend or foe for fear that Washington could abandon its commitments whenever a new president moved into the White House.

This is a stark difference from President Obama’s approach to engaging Iran bilaterally and multilaterally, and having allies in Europe and Asia in agreement with Washington on sanctions and negotiations. Europe is much keener on keeping the Iran deal in place, and Trump’s intransigence could cause irreparable harm to the transatlantic relations.

If Iran were to make the same calculation as North Korea – that Washington’s ’s goal is not to limit its nuclear programme, but rather to exit the nuclear deal as a pretext to regime change – Tehran could view nuclear weapons as a deterrent, much like Pyongyang did a decade ago. This could put the Trump administration in the avoidable position of launching military strikes that might plunge America into another Middle East war.

Trump has often said that he was against the invasion of Iraq – although some of his pre-election statements suggest otherwise. Nonetheless, he has called that war of choice “destabilizing to the Middle East,” and said that the US “should stop racing to topple foreign regimes we know nothing about.” Trump should follow his own advice.

Ironically, Trump’s presidency could follow the same trajectory as the man he so often ridicules: George W Bush – that of a president who manufactured a crisis, ignited an endless conflict, and eroded America’s standing around the globe.

There is no shortage of urgent issues that should keep the president up at night. Islamic State, Syria, North Korea’s nuclear saber rattling, Chinese expansion in the South China Sea, and Russian meddling in Eastern Europe and the Baltic states, to name a few. The Trump administration should leave well enough alone on the JCPOA. It should draw the right lessons from history and work to maintain the deal rather than undermine it.