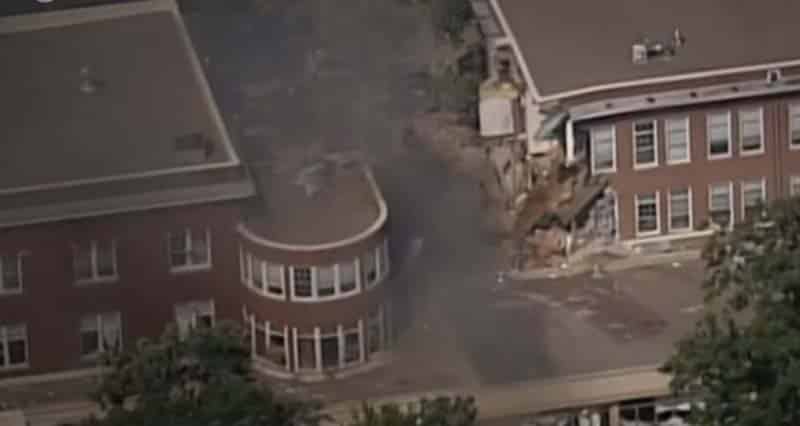 Two people were killed and nine injured on Wednesday after a gas explosion ripped through a Christian private school in Minneapolis, starting a fire and causing a building to collapse, authorities said.

The body of a school employee was recovered at 8 p.m. CDT from the rubble at the Minnehaha Academy, about 10 hours after the explosion, Minneapolis Fire Chief John Fruetel told a news conference.

Fruetel declined to identify either victim pending notification of next of kin.

The Minneapolis Star-Tribune reported that the remains removed earlier in the day were those of Ruth Berg, a 47-year-old receptionist at the school who was engaged to be married.

Family members earlier told local news channel KARE that John Carlson, an 81-year-old custodian, was missing and that no one had been able to reach him.

The nine people who were injured were taken to local hospitals, and one was in critical condition, Fruetel said.

School was not in session due to summer break, Fruetel said.

“It would have been dramatically worse … we were pretty lucky in that sense,” he said.

Authorities said there were early indications that a ruptured gas line may have led to the explosion and that it was caused by contractors working at the school. The academy confirmed on Facebook that there had been a gas leak and explosion at its Upper School.

“This is a day of extraordinary heartbreak in Minneapolis,” Mayor Betsy Hodges told the news conference.

The federal Bureau of Alcohol, Tobacco, Firearms and Explosives said on Twitter its agents, fire investigators and trained canines were at the site of the explosion.

Phillip Day, 41, said he, his wife and their 17-year-old daughter, Chimali, had been meeting a counselor at the school to discuss college options when the explosion occurred.

Day said that, as they left a conference room, his daughter was blown back through the door by the force of the blast and his wife was scraped.

Tramon Van Leer, 33, was in the gym at the Minnehaha Academy playing basketball with his stepdaughter and four other girls when they heard the blast.

After they ran outside to safety, Van Leer said he looked back and said: “Wow, the whole section of the school is gone.”

According to its website, Minnehaha Academy was founded in 1913 and teaches more than 800 students from pre-kindergarten through 12th grade on two campuses.