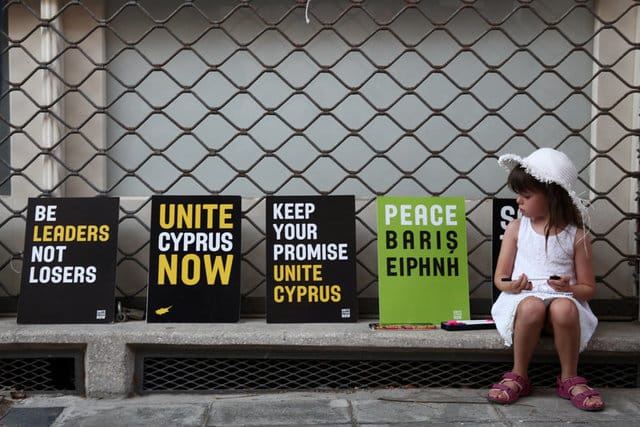 Members of #Unite Cyprus Now, the self-styled pro-peace bi-communal platform, have vehemently denied rumours of a split in the ranks, following different interpretations on social media of what was said during their meeting with Turkish Cypriot leader Mustafa Akinci earlier this week.

Some have not ruled out that the so-called rift among UCN is a deliberately manufactured affair, designed to weaken the group, who insist they remain as united as ever.

A UCN delegation met President Nicos Anastasiades last Friday and then Akinci this past Tuesday. Their aim was to try and understand the two leaders’ take on why the talks in Switzerland collapsed, and to gauge the leaders’ intentions going forward.

On Wednesday, the UCN issued a statement about the two meetings. In it, the group said it felt both leaders have lost trust in each other and in the negotiations process.

“There is an obvious blame game and reluctance to work together for the successful finalisation of the talks.”

But a Facebook posting in the meantime temporary riled the waters.

Leonidas Kyriakides, a member of UCN who was present at the meeting, posted that Akinci told them that, in Switzerland, Turkey never agreed to discuss the scrapping of foreign guarantees and withdrawal of Turkish troops from the island.

This caused some consternation among other UCN members. Responding on social media, several of them set out to correct the record.

One UCN member, speaking on condition of anonymity, told the Cyprus Mail that Akinci had in fact said something quite different:

“What Akinci said is that: one should not separate the clauses in [UN Secretary General Antonio] Guterres’ framework and ask if one agrees with each clause.

“[Akinci said] This is a package and it should be evaluated as a whole.”

Another UCN source confirmed this to the Mail. “Everyone there understood what Akinci said, except for this person.”

Picking up on this back-and-forth on Facebook, daily Phileleleftheros – not exactly known as a pro-solution publication – on Thursday ran a story suggesting that cracks were appearing inside the UCN.

But a UCN source denied there was any ill-feeling among group members.

“Social media is a chaotic tool that can be used in various ways and sometimes impulsively. There was a member of the group that surprised us by releasing info that was not corresponding to the truth. However, the issue ended with an apology on his behalf and the issue was over.

“UCN members stand behind the press releases which is what essentially binds us. There are 100 different lines in the group, not two but we bring it to one collectively,” the source added.

The initial disputatious Facebook posting has in the meantime been deleted.

Likewise, another active member of UCN, who preferred not to be named, called the whole episode “a nothing-burger.”

He said the matter had been blown out of proportion.

But even though UCN has put the issue behind it, the same source said, “one can’t help but wonder whether certain quarters are out to cause trouble amongst us.”

He declined to elaborate, except to say: “UCN is non-partisan, not affiliated to parties, and thus outside the system, if you will. This means we can’t be controlled, and that has got to upset certain people, particularly those who are not pro-peace.

As for UCN’s meeting with Anastasiades, the same source confirmed that the president did lose his cool, wagging his finger at them and in some instances even raising his voice.

“Anastasiades seemed to be on the defensive from the outset. He was frustrated, aggressive and even arrogant. His whole demeanour was as though he was facing a hostile environment, when all we wanted is to ask him questions and make recommendations.”