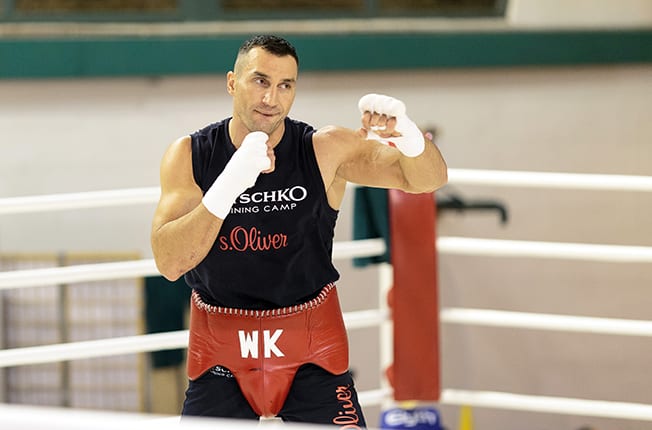 Wladimir Klitschko ruled the heavyweight scene with a steel glove for more than a decade yet it was a defeat by Anthony Joshua which ensured the Ukrainian retired on Thursday with the universal respect that eluded him for so long.

Often denigrated for a robotic style, short on flair, Klitschko reigned supreme in a heavyweight era suffering from a dearth of box office names.

The 41-year-old dispatched a regular supply of average fighters to reach 64 career victories yet few, if any of them, will feature in a showreel of the sport’s greatest contests.

Instead it will be his final fight, against Britain’s Joshua, that will be define Klitschko’s legacy.

Despite a 14-year age gap and fighting in front of a partisan 90,000 Wembley Stadium crowd, Klitschko produced arguably his best performance before being stopped in the 11th round of a sensational fight back in April.

Had he finished off a wobbling Joshua in the sixth round Klitschko would have become only the second fighter after George Foreman to win a recognised version of the world title as a 40-something.

Yet, even in defeat, a global audience finally gave the Germany-based fighter the acclaim he deserved for a career in which he carried a sport so often dragged into the gutter with professionalism and dignity.

An eagerly anticipated Las Vegas re-match with Joshua was in the pipeline, yet Klitschko, who had lost his WBA, IBF and WBO heavyweight belts in a disappointing defeat by Britain’s Tyson Fury in 2015, has decided enough is enough.

“Twenty-seven years ago I started my journey,” he said in the video announcing his decision to retire on Thursday. “And it was the best choice of profession I could have ever made.

“At some point in our lives we need to, or just want to, switch our careers and get ourselves ready for the next chapter and chart a course towards fresh challenges. Obviously I am not an exception to this and now is my turn.

“I’m doing this with … tremendous excitement, dedication, passion; expecting and hoping that my next career, which I’ve already been planning and working on for some years, will be at least as successful as my previous one, if not more successful.”

Klitschko’s manager Bernd Boente said his man had not lost his powers, but was no longer prepared to put himself though the 10-week training camps needed to prepare for big fights.

“It took him time to make a decision but he realised that the motivation and fire was not there any more,” he told Sky Sports. “I don’t think it was that he felt past his best.”

Ukraine’s prime minister, Volodymyr Groysman, said on Facebook: “Thank you for the all-time great fights and victories! I wish you successes and achievements on new fronts.”

Klitschko turned professional in 1996 shortly after winning super-heavyweight gold at the Atlanta Olympics.

He won his first 24 fights before losing to American Ross Puritty in 1998 – his only fight in his native Ukraine.

He suffered defeats at the hands of South Africa’s Corrie Sanders and American Lamon Brewster in 2003 and 2004.

After teaming up with trainer Emanuel Steward, Klitschko became a far greater all-round fighter and went 11 years unbeaten before losing to Fury.

It was an era known as the ‘Klitschko era’ with his older brother Vitali also holding the WBC belt from 2008 to 2012 before retiring in 2013.

Klitschko is second on the all-time list for successful title defences with 23, behind the 25 of Joe Louis, while his 29 heavyweight title fights remains a record.

Unemployment up in July