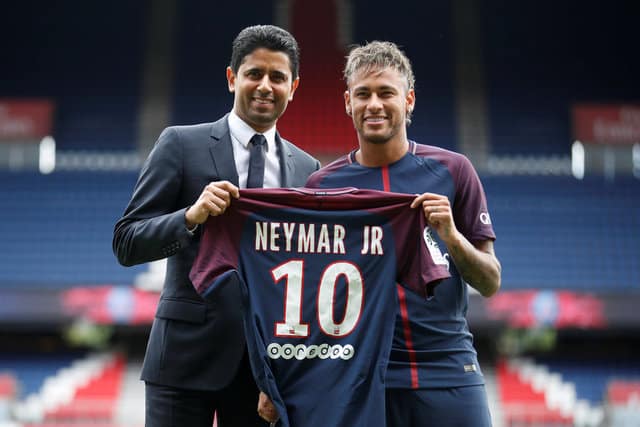 Money was never the motivating factor for Neymar‘s record €222 million transfer from Barcelona, the world’s most expensive footballer said on his arrival at Paris St Germain on Friday.

Before taking to the pitch at the Parc des Princes stadium to show off his skills and new PSG shirt, the Brazilian forward told reporters he had moved to France was because he “wanted a bigger challenge”.

“My heart made this decision and I followed my heart,” said the player who will reportedly be paid €45 million a year.

“Money was never my motivation … I want to be happy, and I want my family to be happy. I’m really sad to hear that people think this way.

“If it was just about money, I could have gone somewhere else,” he said.

The jaw-dropping deal is the first time that a world record transfer fee has been doubled in one swoop. The previous record was midfielder Paul Pogba’s move last year from Juventus to Manchester United for €105 million.

Sports business experts say the transfer – which could lead to a series of big-money deals across Europe – makes little business sense for PSG and may have more to do with its Qatari owners’ desire to exert “soft power” at a time when the wealthy Gulf Arab state is being isolated by its neighbours.

Club president Nasser Al-Khelaifi, who introduced the player as “an idol for the whole world”, said the value of the club had risen by half a billion dollars since Neymar‘s signing.

He was not concerned about possibly falling foul of Uefa’s Financial Fair Play regulations, which limit the amount a club can spend in excess of their income, saying: “We are working very transparently with Uefa.”

As well as his undeniable assets on the field, Neymar proved an instant hit at PSG’s stadium shop which sold out of shirts with Neymar‘s number 10 on the back, at a price of between 100 and 150 euros each.

“Being the most expensive player in the world is not a burden,” Neymar said. “I weigh 69 kg. I don’t have a burden on me.”

Neymar denied that he had tired of playing second-fiddle to Lionel Messi at Barcelona.

“It’s not that I wanted to be the big star at Barcelona,” he said

PSG fans may not have to wait long to see their new superstar in action.

“I can play tomorrow (against Amiens). Why not? I’ll speak to the staff, but I really want to play. I haven’t discussed where I will play. I will play where the coach wants me to.”

“I only stopped playing in the last two days and I’m hungry to play football.”

On the eve of the new French league campaign, PSG have been made firm favourites to regain the Ligue 1 title they lost to Monaco last season, finishing eight points behind them.

However, there has been criticism of the sums involved.

FIFpro, the worldwide union of professional footballers, said the deal illustrated much of what wrong with the sport.

“Football is ever more the domain of a select group of rich, mostly European-based clubs,” FIFPro General Secretary Theo van Seggelen said in a statement.

“Football’s enormous wealth is trapped within a few leagues and clubs when it could be redistributed more efficiently and fairly to help protect competitive balance.

“The transfer rules governed by Fifa are anti-competitive, unjustified and illegal.”

Arsenal’s French manager, Arsene Wenger, linked in the past with a move to PSG, said player valuations were “beyond calculation and beyond rationality”.

But the deal has fed hopes in France that Ligue 1 can become a European soccer powerhouse to rival Spain’s La Liga, England’s Premier League, the German Bundesliga and Italy’s Serie A.

“Ligue 1 has a bright future and Neymar is an accelerator to this bright future of Ligue 1,” said Marc Ingla, director general of top flight French side Lille.