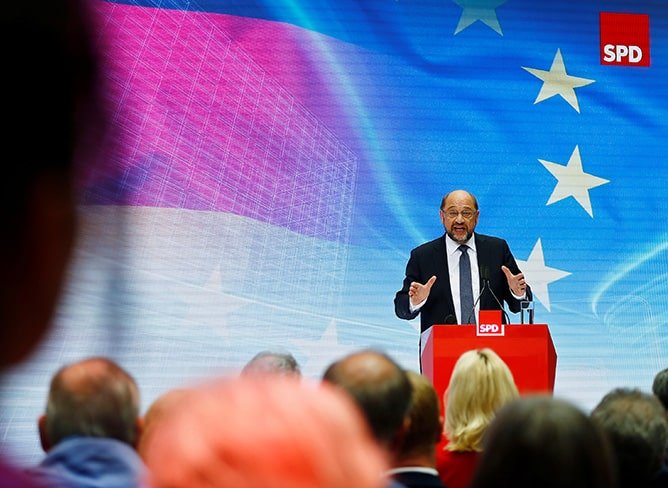 ONE of Germany’s last centre-left coalitions composed of the Social Democrats (SPD) and Greens lost its one-seat majority in the Lower Saxony state assembly on Friday when Greens deputy quit the party, a state SPD leader said.

The surprise move is a potential stumbling block for the SPD ahead of the September 24 federal election, in which Chancellor Angela Merkel is seeking a fourth term. Her conservatives hold a double-digit lead over the SPD in national opinion polls.

If the SPD loses power in yet another state so close to the election, it would hurt the party’s image nationwide and be an unexpected boost for Merkel. The CDU has already toppled two SPD-led governments in state elections this year – Schleswig-Holstein and North Rhine-Westphalia.

It was not immediately clear what would happen to Lower Saxony’s SPD-Greens government led by Stephan Weil. The SPD and Greens would have only 68 seats in the 137-seat state assembly of one of Germany’s most important states.

Lower Saxony hosts powerful companies such as Volkswagen as well as one of Germany’s richest agricultural areas.

Elke Twesten, a member of the state assembly for the Greens since 2008, told a news conference at the state capital in Hanover she would join Merkel’s Christian Democrats (CDU).

“I see my political future with the CDU,” she said, standing next to a conservative leader in Lower Saxony. She added she was a proponent of CDU-Greens coalitions that are disputed in her party, especially in Lower Saxony.

“It wasn’t an easy step, but a necessary one.”

The CDU and Greens were fierce adversaries decades ago at opposite ends of the political spectrum. They now rule together in several states including Baden-Wuerttemberg and Hesse.

Some polls suggest that the conservatives and Greens would be able to muster enough support to form a governing coalition after September’s national election.

Twesten’s move would mean the two opposition parties have 69 seats together in Lower Saxony’s state assembly. The CDU now has 54 seats and Free Democrats (FDP) have 14.

The next election in Lower Saxony is scheduled for 2018.

The SPD-Greens government there could try to continue with a minority government. CDU leaders are calling for new elections.

Pfizer bets on vaccine demand for years, sees sales of $26bn in 2021