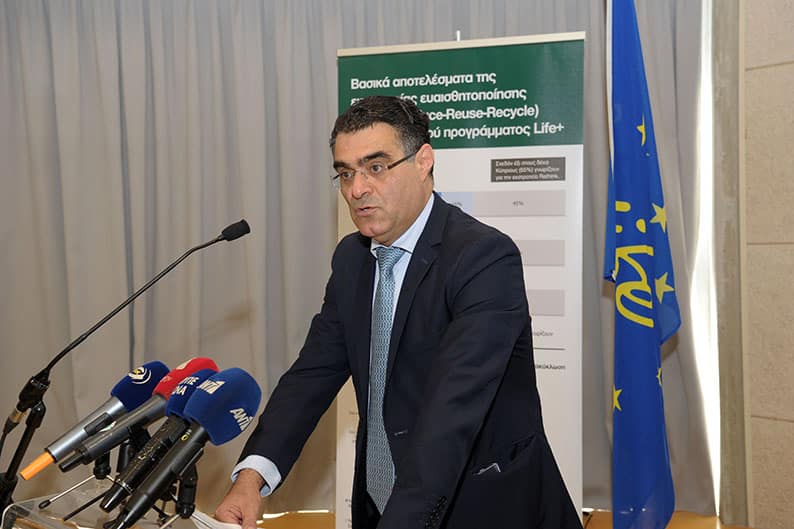 There have been “remarkable changes” in the public’s perception of recycling, Agriculture Minister Nicos Kouyialis said on Thursday.

Speaking at the final conference of the ‘Rethink – Reduce – Reuse – Recycle’ campaign, Kouyialis said the government was promoting three programmes aimed at the reduction, reuse and recycling of waste, one of which is the reduction of waste at beaches, another is ‘I pay for what I throw’ in the Nicosia district and the third concerns the management of waste in the mountain areas.

“There have been remarkable changes in the perception and awareness of the public and the stakeholders,” Kouyialis said, noting that Cyprus faces huge challenges and problems over its obligations to the EU in terms of per capita production of municipal waste.

According to the results of the most recent polls in 2017 for the project, which was presented by the CYMAR Market Research Ltd executive Christos Marangos, as a result of the campaign, awareness was raised over the reduction and the reuse of materials which would be considered as waste.

In previous qualitative research for the project in 2015 and 2016 participants seemed to be completely ignorant of the term reduce in relation to waste management and there was no correlation made with the consumption attitudes followed.
In the latest research in 2017, the term seems to be more widely known while the knowledge regarding the term seems to be derived from the campaign (TV awareness spots) which participants recall having watched.

On the basis of the research conducted about six in ten Cypriots (55 per cent) know about the Rethink campaign.
It was also noted that in 2017 the campaign was rated positively by the large majority of participants (94 per cent) while 100 per cent of those asked believe it should be continued.

A €15 million seaside project currently involves municipalities from Paralimni to Larnaca and is geared towards the reduction of waste from coastal hotels.

According to the minister, soon there will be similar projects from Limassol to Polis Chrysochous.

The programme ‘I pay as much as I throw’ will be implemented in the Nicosia district, while the project in the Troodos area has the aim of reducing waste production or at least the elimination of waste management.

At the conference, Green Party MP Charalambos Theopemtou expressed the hope that legislation on recycling would soon be promoted. He added the environment sector can provide many jobs to unemployed scientists.

On her part, Environment Commissioner Ioanna Panayiotou said there were gaps in informing the world about waste management and referred to the importance of research carried out within the framework of the programme.

Other speakers were Volunteer Commissioner Yiannis Yiannakis, the Chairman of CyBC Thanassis Tsokkos and head of Green Dot, Mike Spanos.

Spanos said Cyprus was a champion in legislating but of not complying with the laws and suggested there be mandatory sorting at the source ie households.

It was based on Eurostat statistics on the large amounts of waste produced for 2012, which came up with 663 kilogrammes per resident per year in Cyprus.

Our View: Eide deserved much better treatment than he received