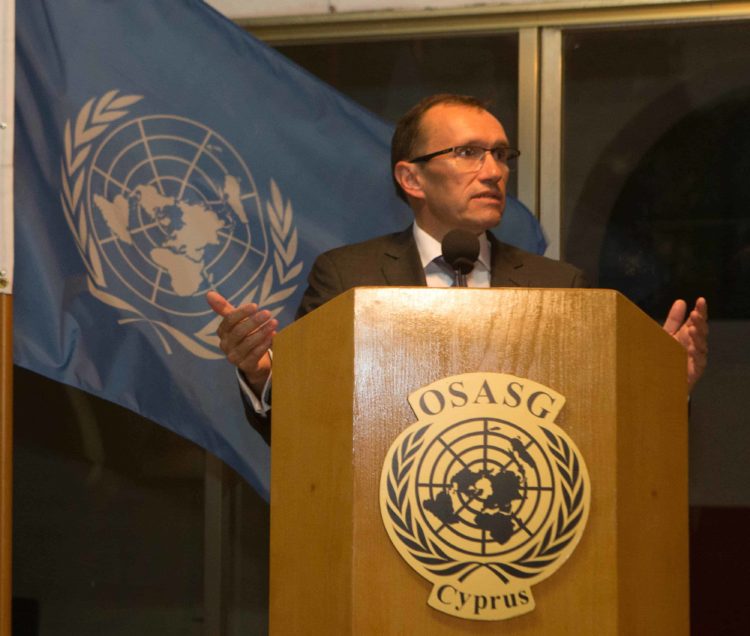 Tensions flared briefly after a farewell reception held by departing UN special adviser Espen Barth Eide at the Ledra Palace hotel in the Nicosia buffer zone on Thursday night, when the diplomat went outside to address members of the bi-communal platform Unite Cyprus Now and reporters drew their ire by hijacking the session.

Addressing the gathered crowd, Eide spoke of the need for civil society to engage more actively in any new process for a settlement of the Cyprus problem.

An informal conversation ensued, with UCN members shouting out questions along with praise for the Norwegian diplomat’s efforts, but things got awkward when Sigma TV reporter Christos Charalambous sternly asked them to stop interrupting Eide so he could finish his remarks.

One UCN member then asked Eide to comment on “the role of the corrupt media” in the Cyprus peace process.

Eide laughed and shook his head, clearly unwilling to address the loaded question, but Charalambous, one of three reporters covering the UCN gathering, took offence and immediately called on all TV cameras to be turned off.

His intervention prompted commotion among the bi-communal group’s people and Eide quietly left.

“We cover your events and you call us corrupt?” an irritated Charalambous asked a UCN member.

“[Eide] came out to talk to us, not you,” another group member shouted back at him.

Among the epithets hurled against the media during the uproar were “traitors” and “sell-outs”.

Most media in Cyprus are perceived as conservative and have traditionally held a rejectionist stance toward the peace talks.

They were instrumental in shaping public opinion against the UN-brokered peace plan that was put to a referendum in 2004, approved by Turkish Cypriots but overwhelmingly rejected by the Greek Cypriots.

In his 2015 autobiography, Cypriot media mogul Costis Hadjicostis – owner of Sigma TV and Simerini newspaper, two of the most outspokenly critical outlets in the run-up to the referendum – revealed that, prior to the crucial Burgenstock session, where the final negotiations on the Annan Plan were to be held, he had told then President Tassos Papadopoulos that his media would “prepare the public” for the rejection of the plan.

In a statement on Friday, UCN cited the incident as an example of what is wrong with the media today and said the people of Cyprus “deserve complete, accurate, and undistorted information on all matters”.

“Last night, an argument broke out between the people of Unite Cyprus Now […] and a reporter for Sigmalive, who instructed the cameramen to stop filming when a question was asked about the corrupt practices of the media,” the statement said.

“Subsequently, reports appeared on various news outlets online that distorted what had actually happened, despite the fact that video footage of the events exists.”

What happened last night was just one example of many similar instances where the media has filtered events for their own purposes, the UCN charged.

“Members of Unite Cyprus Now feel that unless we have an honest debate about the link between media, business, and politics, we cannot say that we have free and independent press in Cyprus,” the statement said.

“We will initiate an open and public debate on what needs to be done to ensure that transparency, clarity, and truth, prevail.”

On Friday, Charalambous took to Twitter to go on the offensive, arguing that the question on “corrupt media” had been unacceptable – even though it mentioned no names – and asking whether “patriotism is treason”.

“What would happen if someone asked [Eide] what he has to say for those who accept any solution, whatever it is?” he wrote.

Sigmalive, the Hadjicostis group’s online news portal, ran a comment by the chief of journalists’ union Yiorgos Frangou, who said “the union will not accept wholesale approaches that baselessly accuse all journalists”.

“The corruption charge is too serious to state so lightly and without evidence,” he said.

“Anyone who believes they are in possession of such evidence should present it to the authorities to investigate.”

Pierce Brosnan has paid tribute to the late Robin Williams