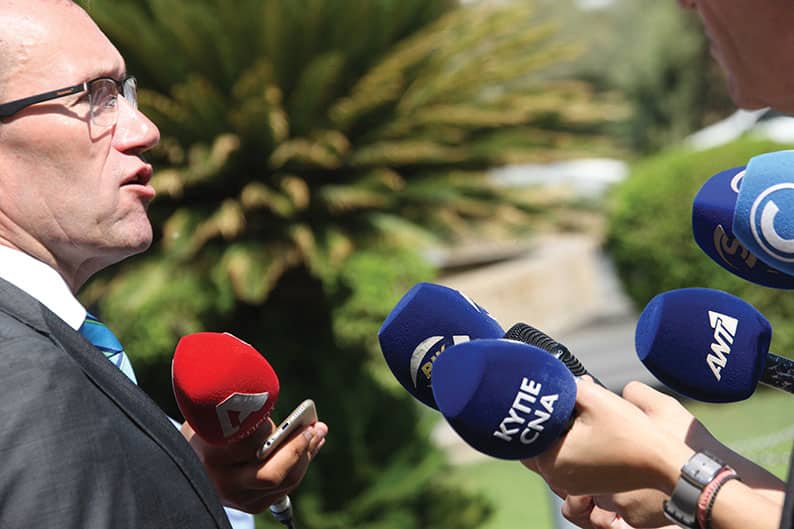 DESPITE the constant undermining and public abuse he was subjected to by President Anastasiades and his spokesmen, the continuous questioning of his integrity by Greece’s foreign minister and the hysterical calls for his removal by the political parties, Espen Barth Eide, maintained his dignity as he bade farewell to the two leaders and attended his farewell reception on Thursday.

Throughout his two-year stint as the UN Secretary-General’s Special Advisor, the Norwegian diplomat was a model of professionalism, objectivity and plain good sense, wholeheartedly committed to securing the result all his predecessors failed to achieve. He did an excellent job, bringing the two sides closer than ever before to a deal, but in the end was let down by the unwillingness of the leaders to make the big leap and sign an agreement. He created the conditions, but neither he nor the UNSG could force the sides to agree a settlement.

For his honest and tireless work, he became a hate figure for the Greek Cypriots, probably because he tried too hard to overcome obstacles to the process and push it towards a conclusion. Although there had been many critical articles in the press and the rejectionist parties regularly took swipes at him, attacks became much nastier once the indescribable Nikos Kotzias labelled Eide a “lobbyist for Turkey.” This worked as signal for the political parties to embark on an unrelenting assault on the Norwegian, encouraged by off the record briefings by the government spokesman.

The sad thing was that all this had the approval of Anastasiades, who led the public attacks after Crans-Montana and stepped them up after Eide had the audacity to offer a different narrative from the president about the collapse of the process. The Norwegian was publicly called a “liar” by President, while his spokesman undertook the job of destroying his professional reputation, claiming he did not understand what was going on during the conference in Switzerland.

The government-orchestrated character assassination did not end there. At Tuesday’s national council meeting Anastasiades had a dig the Akel leader Andros Kyprianou for secretly meeting Eide, a point that was reported in the media, as if something sinister had taken place. If Kyprianou had met a boss of the criminal underworld secretly, there would not have been such outrage, but it seems meeting Eide has come to be regarded as treachery.

After this despicable behaviour, the president had the nerve to thank Eide at their last meeting on Thursday morning and also attended the farewell reception in the evening. The Norwegian was gracious and generous in his comments making a dignified exit despite the nastiness he was subjected to in the last few months. A good and honest man, he deserved much better treatment than he received.