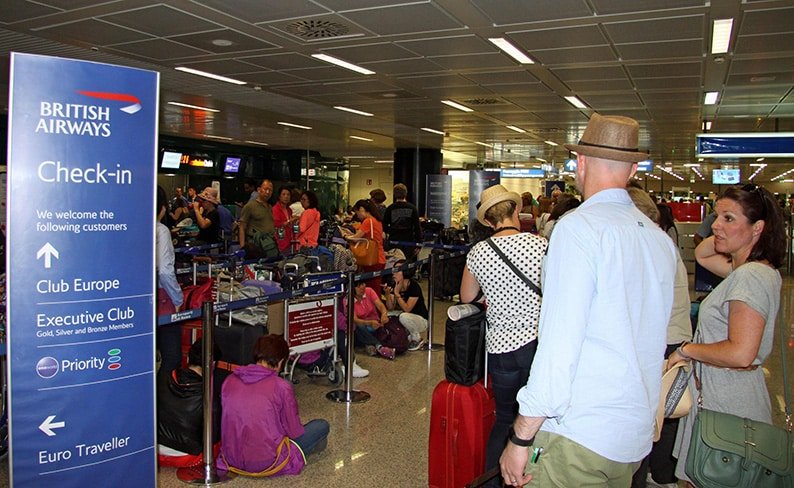 Passengers stand at the British Airways check-in desk after the London's Gatwick and Heathrow airports suffered an IT systems failure, at the 'Leonardo da Vinci' airport in Fiumicino, near Rome, Italy, 27 May 2017. British Airways canceled all flights from London's Heathrow and Gatwick airports on 27 May as a global IT failure caused severe disruption for travelers on a busy holiday weekend. EPA/TELENEWS

I arrived. I got here in one piece. The plane was on time. Anything else is a bonus, surely? Then why do I feel so cheated? Well, the expense for one. The unnecessary stress. The inefficiency. The queues. The lack of refreshments. In short, the rather shoddy service I received at the hands of British Airways. Like so many other things in a post Brexit referendum world, we seem to be trading on past glories, with delusions that we still do things better.

In the case of my BA flight from London on July 23, I can assure you that we really don’t do things better. In response to my complaint about receiving a budget airline service at scheduled airline prices, a member of the cabin crew admitted that EasyJet do it better these days. This is ironic given that BA has just recently fallen in the Skytrax rankings of airlines to 40th in the world, one place ahead of EasyJet and twelve places behind budget airline Norwegian Air, who also fly to Cyprus from London Gatwick.

Well, how bad can it have been, I hear you ask? Terrible, actually. It started with the service (and I use that word loosely) on the ground. I arrived at Gatwick at 7am for a 9.30 flight. I know it was the first weekend of the school holidays but I didn’t have young children or much luggage and, foolishly, I didn’t expect this to be beyond the capacity of BA to deal with. Well, mea culpa; that kind of misplaced loyalty and nostalgia for the glory days has become the norm in the UK these days. Maybe I should have arrived five hours before the flight. But I didn’t. Maybe I should have paid for Club, but I didn’t. I thought I had paid enough already. But not enough to avoid being herded into the longest queue on the airport planet, only saved from my increasing boredom and fury when called to the front an hour before take off.

How much do you need to pay before you can reasonably expect the airline to be able to provide a smooth transition through each stage of the journey, without having to spend as many hours on the ground as in the air?

It’s bad enough that you have to pay for food and drink on BA now, but because you can only pay by card and they keep the food at the back of the plane, it seems to take forever to hand it out. How long, you ask? If you sit in row 20 or beyond, then more than three hours after boarding, and more than two hours after take off, to be precise. The once famous advertising slogan, “The world’s favourite airline”, sounds rather hollow today.

Let’s face it, it is hard to say anything positive about a service that involves queuing for almost 90 minutes to drop your bags at check-in, having to rush straight through security to the boarding gate, followed by a three-hour wait on board the flight before a food and drink trolley arrive – only to be told they have run out of food.

This Brit was always more than happy to “fly the flag” even when prices were slightly more than other airlines. Why? Because in the past, there was some truth to previous slogans: “we’ll take more care of you.” And, “To fly. To serve.” Just, “To fly” these days would be more appropriate. “It’s the way we make you feel.” Really? A catchy little branding ditty, but based on the way people were feeling on my flight, BA would be a lot lower than 40th in the world.

Is this normal service? Apparently it is. One crew member told me that staff had been in tears at the abuse they had received from passengers over the previous few days. I felt sorry for those flying on that particular plane on the way back to London, as there was no food or snacks at all left for any of the passengers! The leg room seems to be less, and the aisles are definitely smaller, as even the slimmest of passengers struggled to get past the trolley, which as you can imagine created havoc for a rather longer time.

There may be no real service to speak of, but at least you still get it with a smile. The illusion of quality is what Britain is all about these days.