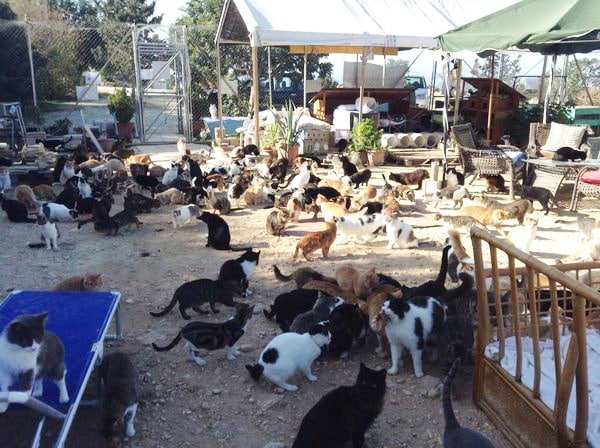 Cyprus’ cat population is now a staggering 1.5 million animal according to welfare groups who blame years of chronic underfunding of spaying and neutering programmes.

Cat shelters are now overwhelmed while every town has its ‘cat ladies’ who feed the local cat population and often pay for vet bills out of their own pockets. Some public areas even have ‘cat stations’ established by animal lovers where the public can come and put out food.

A one-off grant of €75,000 for additional financial assistance towards the stray animal neutering scheme, approved by the cabinet this week, will do little to slow the rate of population growth animal groups say. The sum will bring the total state budget for the scheme to €125,000.

The Animal Party said the announcement was “a good start” but warned that for the money to be spent “properly and effectively”, a permanent state spaying and neutering programme should be in place to solve the “serious problem of the increase of the populations of abandoned dogs and cats”.

But for Dinos Ayiomamtis of the Cat Protection and Welfare Society (Cat Paws), the announcement was a mere pre-election trick, ahead of the presidential elections next year.

“I heard the announcement with a smirk on my face,” Ayiomamitis told the Sunday Mail. “We’ve heard similar announcements many times, but nothing was being done.”

Ayiomamitis said that up until five or six years ago the government used to give €50,000 annually for cat neutering which was equally distributed to each district. Government funding ceased completely for a number of years during the economic crisis. It resumed in 2015 but it was reduced to a mere €10,000 for the whole island. This meant €2,000 per district, translating to “neutering for 25 to 30 cats”.

Taking into account that there are around 1.5 million cats on the island, he said, “that’s nothing”.

“Last year they gave €5,000 for neutering and spaying of cats, which they deducted from the €50,000 they give in total as annual grant to around 25 animal shelters and animal welfare organisations,” he said.

To make matters worse, Ayiomamitis said that the government has not even specified whether the €75,000 announced this week was to go to cat or dog neutering.

“The biggest problem is stray cats, not dogs. The problem with dogs is abandonment. Female cats, however, multiply at much faster rates – a female cat can get pregnant as young as four or five months old, and can give birth two to three times per year,” Ayiomamitis said.

The only way to tackle the chronic overpopulation of cats, he said, was for the government to give €100,000 for at least five years in a row. He added that funds should be distributed according to the cat population of each district.

But taking into account the history of state funding for this cause, he said, “to us this is empty promises. We thank them, and we are looking forward to receiving it if we finally get it.”

There has been a surge in cat numbers this year he said.

“We had many births, many abandonments which also led to increase of a disease which killed many kittens.”

For Dawn Foote, a volunteer at the Tala Monastery Cats sanctuary in Paphos, if the money is managed correctly, “it may have a very small impact”.

She added that the most important thing to do to reduce cat numbers is to educate owners on the benefits of spaying and neutering.

“Unfortunately, a lot of animal owners don’t use this service,” Foote said. Some even cite religious beliefs, that animals should be left “as God intended them to be”.

The sanctuary in Tala cares for around 750 cats and Foote said that at the beginning of the year they had hoped that all the neutering and spaying they had done in previous years had paid off. By the end of April they knew they had been proved wrong.

“Not a day has passed since then where we have not had kittens abandoned in the park, sometimes dogs as well,” she said.

If the government wants to get the cat numbers down, Foote said, they ought to introduce mobile neutering units; specially equipped cars, manned with veterinarians, travelling from area to area all over the island offering this service.

Ayiomamitis proposed that for animal welfare to be safeguarded, there should be an independent agency on the prevention of cruelty to animals in each district.

He said that the service the government wants to introduce to deal with animal welfare, would not be effective. “They will just appoint heads of ministries, bureaucrats and two to three representatives of animal welfare non-government organisations as a committee,” he said.

The agriculture ministry said on Wednesday that Anastasiades would unveil soon the government’s comprehensive policy on animal welfare.

Ayiomamitis was not the only one to see the government move as nothing more than an election ploy, especially since the announcement came a few days after presidential candidate Nicolas Papadopoulos declared his programme on animal welfare if he is elected.

“The visit of Nicolas Papadopoulos to a stray animal shelter hastened the adoption of long-awaited government decisions on animal welfare – a chronic problem – and convinced us humble people of the sensitivity of President Anastasiades and his government for animals,” was the sarcastic response by the Solidarity Movement to the government’s announcement.

Cat Paws Cyprus runs a programme to help the public to neuter and spay stray cats they care for at reduced prices – €40 for females and €25 for males. It also arranges to neuter free of charge animals of families on welfare (up to two animals per year). For more information:  [email protected], Facebook/CAT P.A.W.S Cyprus, or call 99769025.