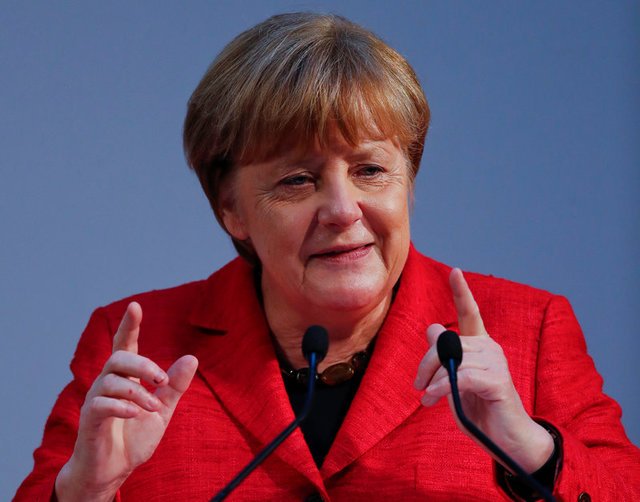 Germany’s Social Democrats on Sunday rejected NATO’s target of spending 2 percent of national output on defence and accused German Chancellor Angela Merkel and her conservatives of kowtowing to the demands of U.S. President Donald Trump.

With Germans set to vote in a national election next month, SPD leader Martin Schulz and Thomas Oppermann, who heads the centre-left party in parliament, issued their strongest criticism to date of Merkel, the NATO spending target and Defence Minister Ursula von der Leyen.

“We say a clear no to the ‘two-percent target’ of Trump and the CDU/CSU,” the two leaders wrote in an essay for the Funke Mediengruppe newspaper chain, referring to Merkel’s Christian Democrats and their Bavarian sister party.

“It’s not only unrealistic, it is simply the wrong goal,” they said, in comments aimed at differentiating the SPD from Merkel’s conservatives after four years in a “grand coalition”.

The comments put the SPD on a collision course with U.S. officials, who began pressing Germany long before Trump’s election last November to increase its military spending.

The SPD leaders, whose party is lagging Merkel’s Christian Democrats in the polls by 15 percentage points, said Germany would have to nearly double current defence spending from 37 billion euros to meet the NATO target. That would make it the largest military power in Europe – a goal they said “no one could want” given Germany’s Nazi history.

Instead, they said, Germany should focus on building a strong European defence union and, ultimately, a European army – a stance that may resonate with a deeply pacifist German public that remains sceptical of military engagements.

“Merkel and the CDU/CSU make themselves small vis-a-vis Donald Trump when they answer his provocations around the two-percent target by saying, ‘Okay, fine, we’ll put in more money,’ as if we didn’t have any better ideas what to do,” they wrote.

They said increased military spending should be matched by higher outlays for diplomacy, humanitarian aid and crisis prevention.

Foreign Minister Sigmar Gabriel, a former SPD leader, has also questioned the NATO target, but the Schulz-Oppermann essay was far more explicit, driving a further wedge between the parties in Merkel’s right-left coalition.

Merkel, who is poised to win reelection on Sept. 24, insists that Germany is committed to reach the two percent target. She has also chided Gabriel pointedly, noting his predecessor signed off on the NATO commitment when it was first made years ago.

Merkel’s conservatives have about 38 to 40 percent support in the polls, and hope to form a coalition government with one or more of the smaller parties, after the election.

Political analysts say the SPD’s tougher stance on military projects could help lay the groundwork for a post-election coalition with the pro-environment Greens and the Left party.

But Sevim Dagdelen, a leading member of the Left party, said it was deceitful to call for more spending on European defence projects as the money would still probably come at the expense of social programmes.

In June, the SPD also reversed course and rejected plans to lease Israeli drones that can carry weapons to protect German soldiers serving in Afghanistan and Mali, sparking sharp criticism from von der Leyen and the top officer in the German air force.

The essay also criticised von der Leyen’s leadership as defence minister since late 2013, citing continued problems with equipment, a lack of planning, and challenges in recruitment.

Turks would not budge on troops says Anastasiades