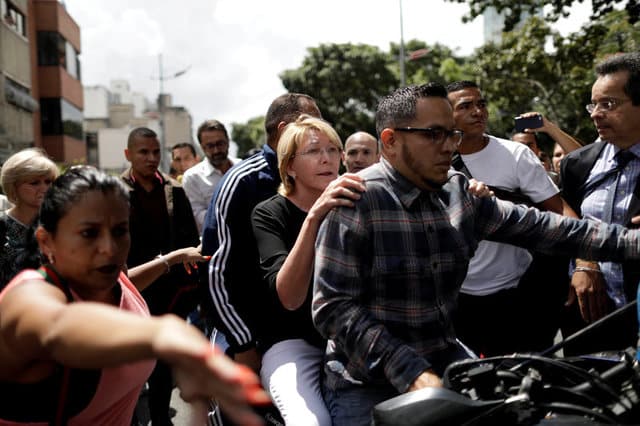 By Corina Pons and Alexandra Ulmer

Venezuelan authorities have suppressed a military rebellion near the central city of Valencia, a ruling official said on Sunday, less than two days after President Nicolas Maduro formed a legislative superbody internationally condemned as a power grab.

Socialist Party deputy Diosdado Cabello made the announcement shortly after the release of a video showing a group of men in military uniform announcing a rebellion and calling for a broad uprising. But the rest of the country appeared to be calm, with the capital Caracas waking to a quiet Sunday morning.

One witness in the area of a military base in the town of Naguanagua reported hearing gunshots before dawn, but Cabello said the situation had been brought under control. Officials said the rebels, whom they described as “terrorists,” were trying to steal weapons and that seven people were detained after the attack on the base.

The Defense Ministry did not immediately respond to a request for comment. But government allies were quick to denounce the attack as a right-wing plot aimed at bringing down the “Bolivarian revolution” started nearly 20 years ago by the late Hugo Chavez and carried on by his protege Maduro.

“These attacks, planned by delirious minds in Miami, only strengthen the morale of our armed forces and the Bolivarian people,” tweeted Socialist Party official Elias Jaua.

On Friday, government allies inaugurated a new legislative superbody that the Venezuelan opposition and leaders around the world denounced as a power grab by Maduro.

In Sunday’s video, a man who identified himself as Juan Carlos Caguaripano, a former National Guard captain, said: “We demand the immediate formation of a transition government.” He was flanked by about a dozen men in military uniforms.

“This is not a coup d’etat,” he said. “This is a civic and military action to re-establish constitutional order. But more than that, it is to save the country from total destruction.”

Local reporters published videos appearing to show dozens of Venezuelans near the base in Valencia taking to the streets to protest the government before being pushed back with tear gas. Reuters was not immediately able to confirm the footage.

Six weeks ago a rogue policemen attacked key installations in Caracas by helicopter, failing to spark a larger movement.

Venezuelans view the armed forces as the key power broker in their country, and opposition leaders have repeatedly exhorted the military to break with Maduro.

But the top brass continues to publicly profess loyalty to his government. Critics say juicy government contracts, corruption, and contraband mean many military officials want Maduro to stay in office and fear persecution should the opposition take power.

Since April more than 120 people have been killed in unrest as rock-throwing protesters were met by state security forces firing rubber bullets and water cannon. (http://tmsnrt.rs/2ujuylf)

Maduro’s new “constituent assembly” removed the chief prosecutor from her post over the weekend and ordered her to stand trial, confirming opposition fears that it would use its powers to root out critics of the government.

The prosecutor, Luisa Ortega, had become Maduro’s main challenger from within the ruling socialist movement since the start of sustained opposition street protests four months ago.

Venezuelan authorities on Sunday accused the political opposition of being linked to the Valencia rebellion, raising the specter of a further crackdown on dissent in coming days.

Oil-rich but economically ailing Venezuela has a long history of instability. Maduro’s mentor Chavez was a military officer who started his political career with a 1992 coup attempt, for which he served time in jail before winning the presidency six years later. Chavez died of cancer in 2013.

Turks would not budge on troops says Anastasiades

Israel moves to shut down local operations of Al Jazeera