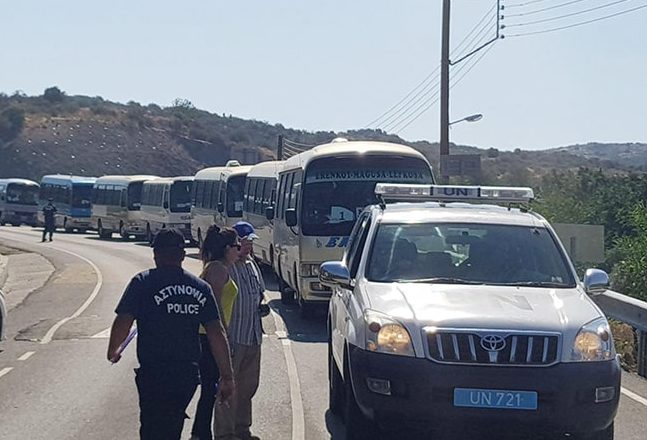 Following a short delay, 46 small buses carrying some 900 Turkish Cypriots started crossing over the Limnitis checkpoint on Tuesday morning, en route to the Kokkina enclave for the annual celebrations of the Tillyria bombing by the Turkish air force in 1964.

The delay, the Cyprus News Agency reported, related to procedural issues, since the number of buses initially authorized by the Republic of Cyprus to cross over to Kokkina was 30, while the Turkish Cypriot side informed on Monday afternoon that over 70 would be despatched.

In the end, it was agreed that the Turkish Cypriots would be allowed to cross in 46 buses.

A number of Turkish Cypriots will to go to the enclave with cruise ships and military boats on Tuesday.

‘State’ officials from the Turkish-held part of Cyprus also arrived at Kokkina for the celebrations, including Turkish Cypriot leader Mustafa Akinci, who was transported there by helicopter.

In remarks at the event, Akinci repeated the claim that the Turkish Cypriot side was ready to “walk the last mile for a bicommunal, bizonal, federal solution to the Cyprus problem” at the recent Swiss talks, unlike the Greek Cypriot side.

“With or without a solution, however, Turkish Cypriots and Greek Cypriots must have a peaceful relationship,” he added, expressing hope that a deal might be struck eventually.

Addressing the problems at the Limnitis crossing point on Tuesday morning, Akinci said “these things should not happen”.

“Cyprus is big enough for both communities, and they can live peacefully if each respects the other’s rights,” he said.

“Turkey’s cowardly bombings of 1964 teach us that a solution [to the Cyprus problem] must explicitly rule out a role and stake for Turkey in Cyprus,” Diko said.

“We are saddened to note that Turkish Cypriots celebrate the cowardly slaughtering of civilians in 1964.”

The government’s permission for “Turkish Cypriots and settlers” to travel to Kokkina for “the provocative celebration of barbaric bombings with banned napalm bombs”, Edek said, is merely confirmation of the “rampant defeatism” of the government.

“Unfortunately, the general way it chooses to stand opposite Turkey and the occupying regime is fearful and yielding,” the party charged.

The president of the community council of Kato Pyrgos, the main village in the Tillyria region, Nicos Cleanthous, described the day as one of infamy for the area and all of Cyprus in general.

The memories, he said, go back 53 years, with older people remembering the crimes committed by Turkey in the Tillyria region, with the bombings of the Turkish Air Force in August 1964 at the expense of the civilian population of the region.

Following inter-communal violence which erupted in December 1963, Turkish Cypriots established a bridgehead at Kokkina in 1964, providing them with arms, volunteers and materials from Turkey.

Last year a total 1,015 Turkish Cypriots visited the area on the day of the anniversary.