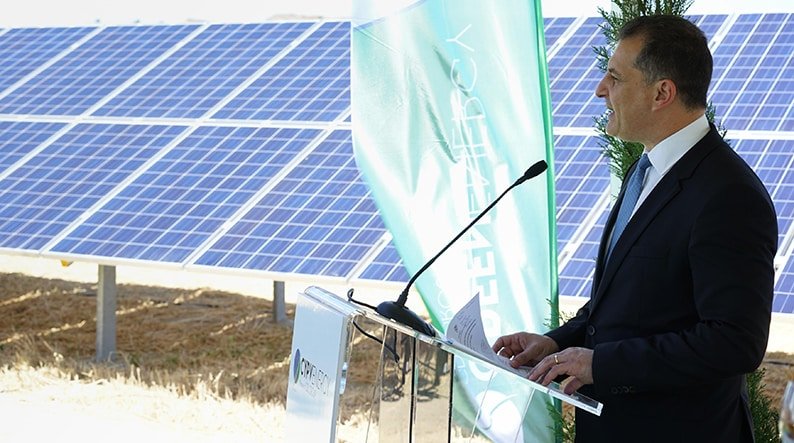 Energy minister Giorgos Lakkotrypis opening a photovoltaic plant in May

A dispute is escalating between state-run power company EAC and the government over the former’s intention to create a solar park in Akrotiri, and the latter’s opposition to the project.

EAC chairman Andreas Marangos has gone as far as to publicly dub the energy ministry’s disagreement “a hostile act” against the power utility.

The EAC wants to self-finance and operate a 20MW photovoltaic (PV) power station inside the Sovereign Base Area (SBA) of Akrotiri, in what it says will reduce its own generation costs and ultimately benefit consumers as well.

The proposed location is close to the SBA’s airport, on land belonging to the Limassol bishopric. The park would take up an area of approximately 300,000 square metres.

The notion was first floated about three years ago, and it’s understood the energy ministry has been unsympathetic all along.

Matters came to a head a few days ago after Marangos made his “hostility” comments to a local daily, which drew a censure from Stelios Chimonas, the permanent secretary of the energy ministry.

In a letter addressed to the EAC board, Chimonas chastised its chairman, hinting that Marangos was ignoring the nuts-and-bolts issues and was seeking to politicise the matter.

In July, the department of the environment had issued an environmental impact report, claiming that the works for the solar park would affect the biodiversity and ecosystem of the area.

Furthermore, according to the report, some 4,500 mostly cypress and citrus trees would have to be chopped down and air pollution would be caused during the works, in addition to solid waste.

The report further noted that the operation of the proposed solar park – the largest on the island in terms of capacity – might jeopardise the stability of the electricity grid given that nothing on this scale has been attempted before.

Moreover, it argued that the proposed area was undergoing zoning modifications, thus the project would have to be put on ice until the new zoning arrangements were finalised.

Lastly, citing the energy ministry’s position, the report said a project of this type could not go ahead before the opening up of the electricity market, and also due to the current absence of a government-approved PV scheme.

The energy regulator envisages full liberalisation of the energy market by mid-2019.

The gist of the row, said sources familiar with the matter, is the energy ministry’s policy in general to hold back the EAC, preventing it from embarking on any projects that might expand the entity or make it more competitive once the electricity market does open.

“From the outset, both Chimonas and the energy minister Giorgos Lakkotrypis have been hell-bent on either fracturing the EAC, ultimately with the aim of privatising it. That’s why they won’t allow the EAC in its current form to grow in any way.”

The source said each of the ministry’s arguments against the solar park can be countered, and have been.

The EAC, he added, had done its homework on the project, covering all the angles, including evaluating the potential impact on the environment and on the local road network.

He said the power company had briefed in detail the civilian commander of SBA Akrotiri, who gave the project “his blessing” once the EAC provided several assurances, such as that the solar park would not create problems of glare for aircraft approaching the runway there.

But then, the same source said, the department of environment stepped in and poured cold water on the project.

Without the department’s endorsement, the EAC cannot apply for a licence for a PV park with the energy regulator, so the issue has remained in limbo.

“They say they can’t allow the park until the opening up of the electricity market, which is not expected to happen until 2019.

“But it would take about two years to build the solar park once the permit is granted. So if we don’t start now, today, we will never meet Cyprus’ 2020 goal of renewable energy sources accounting for 13 per cent of total energy consumption.”

To date, no other entity – private or otherwise – has proposed building a PV project of this magnitude.

“And here’s why the ministry’s stance doesn’t make sense. The only plausible explanation is that they’re waiting to give the RES market over to private concerns. And we all know how well that went, with the wind parks and the long-term contracts that did not include a tariff renegotiation clause.”

The same source went on to make a prediction: “Despite it all, I think that in the end they [the government] will give the EAC the green light for the solar park. I mean, where else will they go?”

Amy Schumer is set to make her Broadway debut